Can an Armenian Spring Come with One Flower? 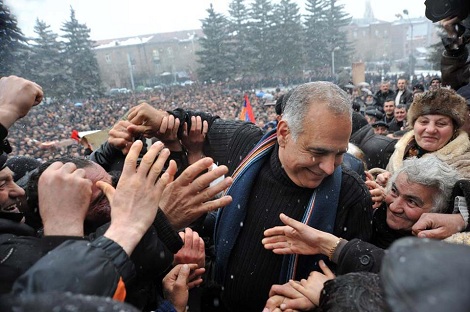 Armenian leader Raffi Hovannisian greets his supporters at a post-election rally. His movement to "return power to the people" has a brand new name: Ba-revolution, the revolution of hello (barev). (Photo credit: facebook.com/Raffi.K.Hovannisian)

Armenian leader Raffi Hovannisian greets his supporters at a post-election rally. His movement to “return power to the people” has a brand new name: Ba-revolution, the revolution of hello (barev). (Photo credit: facebook.com/Raffi.K.Hovannisian)

For the first time in post-Soviet Armenia’s history, a non-establishment candidate has almost won the presidency. But “almost” is not enough for the tens of thousands who have been peacefully protesting what they see as a rigged election. Among their disappointments are Western government’s generally positive assessment of the Feb. 18, 2013 vote and the international media’s indifference to their cause.

Liberal candidate and Heritage Party nominee Raffi Hovannisian’s official 36.8 percent—against conservative incumbent Serge Sarkisian’s 58.6 percent—is widely viewed as not reflective of the actual vote. Hovannisian’s supporters cite the near 70 percent their candidate received in Armenia’s second largest city—Gyumri. Unlike in the rest of the country, Gyumri’s mayor is not a local strongman of incumbent President Serge Sarkisian and his Republican Party.

Hovannisian’s strong performance has brought hope to many, particularly in light of speculation that Sarkisian would handily win reelection. Hovanissian’s performance, which some minimize as a mere vote of protest against the regime, is also surprising in light of a lack of endorsements from other opposition forces such as Prosperous Armenia, Armenian National Congress, and the Armenian Revolutionary Federation. It is unclear whether this was an inability to build coalitions or a strategy of direct outreach.

Hovannisian has a record in both. In the latest parliamentary elections, he partnered with another former Foreign Minister—Alexander Arzumanyan. The two parted ways after securing a small number of seats and disagreeing over their pledges and plans. This may explain, in part, why Hovannisian launched a presidential campaign of direct outreach, which often included random appearances in different neighborhoods to shake hands and say “Barev” (“Hello”). His outreach to young people also included an appearance on ArmComedy, Armenia’s popular version of Jon Stewart’s The Daily Show with occasional Stephen Colbert-like nationalist sarcasm. Hovanissian told the hosts that he cancelled everything as soon as he got their invitation.

Hovanissian also cancelled his comfortable life in his native California, relocating to Armenia in the aftermath of the 1988 earthquake. A lawyer and diplomat, he soon accepted to become the newly-independent country’s first Foreign Minister in 1991 and fax “Armenia is free. Please recognize” to the world. Yet his diplomacy, charisma, and fair-mindedness seem to contradict some of his arguably hard-line positions. Hovanissian wants Armenia to recognize the disputed region of Nagorno-Karabakh as a free country, which some fear would hinder the hitherto unfruitful peace negotiations and even be used as an excuse by conflict party Azerbaijan for a military attack against Armenia and Nagorno-Karabakh. It is particularly offensive for incumbent President Serge Sarkisian to hear hints that he isn’t doing his best for the region he hails from and fought for. Yet Hovanissian is the only major Armenian political figure to have recently visited Azerbaijan’s capital Baku.

Hovanissian’s perceived hard-line positions on foreign policy issues may partly explain Western powers’ reluctance to support his case. Serge Sarkisian, his critics argue, has been more than accommodating in demands to reconcile with historical foe Turkey, in part because of the West’s implicit recognition of his first, 2008 election. (Unlike Sarkisian, Hovanissian descends from what is now Eastern Turkey, where the Ottoman Turks annihilated the indigenous Armenian population during WWI.) The New York Times bluntly articulates Washington’s stake in the Feb. 18, 2013 Armenian election: To “maintain stability in a country that has become an increasingly important, if uneasy, United States ally in monitoring Iran’s nuclear ambitions.”

In the eyes of some, international observers’ monitoring results seemed to reflect Washington’s interests (while a non-governmental observer, to cite one example, reported massive ballot stuffing). A group of civil society activists interrupted the press conference by official observers and read a statement about the fraud. They didn’t mention Hovanissian’s name and only identified themselves as “Citizens of the Republic of Armenia.” One of them screamed in Armenian, “Do you have such elections back home?”

Presidential elections, save the first one, have always been divisive and sometimes bloody in Armenia. All candidates who won second place and their supporters felt that the election was rigged. Unlike Hovanissian, however, these candidates were or had been a key part of the establishment and had influential supporters with eyes on power and resources. Most of those forces have been quiet, waiting for the next comeback opportunity. Hovannisian’s failure or choice not to unite them before the election is probably a political shortcoming. But it may have been a blessing, as a stronger challenge might have actuated more intense election fraud. An Armenian saying advocating for unity states, “Spring won’t come with one flower.” But it can start with one.

A version of this article was originally published in The Armenian Weekly. 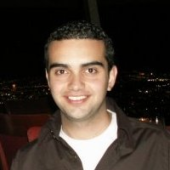