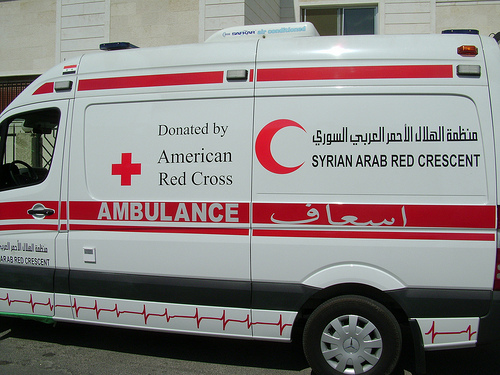 DAMASCUS — There are more than 9,000 of them. Predominately young, but of all ages. Volunteers, everyone. Often risking their lives just to come for a twelve hour work-shift, as many as seven days a week at the Syrian Arab Republic Red Crescent Society (SARCS) Emergency Operation center.

Located at The New Zahera (blooming flowers) Hospital in Damascus just to the south of Yarmouk refugee camp, SARCS has its main emergency response teams HQ.  It is here where Syrians, some Palestinians, and even a few from the region and the West receive training as qualified paramedics. Maybe two-thirds of those this observer spent a day with a few days ago are students and graduates. Nationalists all, and in the main, but not everyone, supporting the government, but sympathetic towards whomever can end the killing and return life even to “pre-events normalcy”.

In the Operations Center main room, volunteers take phone calls, and as they are being spoken to, they stare at a large computer screen that shows a Google Earth close-up view of the areas where emergency responders are urgently needed. Some of the volunteers, being tech savvy, have outlined and regularly update with a green line, the most recent safest routes to the crisis that their ambulances should take.  The dispatchers get input from police, neighbors, even troops and “others” advising them which streets are currently relatively safe for travel. Periodic snipers are a fact of daily life for the responders whenever they are “on mission”.

One shift manager told this observer that something the operations room really wants to help them with their work is something he called “Google live”.  Apparently is can some activity as it happens.  His team has two problems as they try to secure this capability.  One problem is that GL is forbidden by the US-led sanctions. But frankly, his team could care less and already knows how to hack into something to secure it. The main problem is that they need Syrian government approval to set up Google live and they are hoping to get it soon.  This GL capability will help SARCS emergency teams get to their destination faster and safer.

The main emergency operation center is an exciting beehive of activity staffed by friendly people urgently working to help others. Dressed in bright orange overalls plainly marked with “SARCS” in red letters.  As are their dozen ambulances and other vehicles.  The reason?  To emphatically distinguish themselves from the other rescue vehicles operated by the Ministry of Health.  The reason this is important is because rebels do not hesitate to target their ambulances with RPGs and other weapons, whereas the Al Nursa Front and others insist SARCS ambulances will not be targeted. For example, the day Yarmouk Palestinian Refugees camp was bombed three weeks ago, leaving many dead and three times the number wounded, SARCS ambulances raced into the camp and pulled out 30 victims in half a day.

Volunteers advised this observer that the reason their vehicles are rather less likely to be targeted is that SARCS strictly complies with the Hippocratic oath and keeps politics out of their work as best they can.  As this observer witnessed several times first hand, when an emergency call comes in on the #133 line, the dispatcher asks only the location,  injury assessment if available, employing the Red, Yellow, Green system.  No questions are asked whether the victim is pro or anti-government, sect, nationality, or political affiliation.  If the victim has a weapon the ambulance driver instructs friends of the victim at the scene to take the weapon as none are allowed on the stretcher or in SARCS vehicles.  While giving medical care, it is prohibited for SARCS volunteers to inquire about political views or details about the circumstances surrounding the injury.

An observer might conclude that this is one of the reasons that SARCS emergency response teams have won the general trust of Syrians and NGOs, who by Syrian law are obliged to work with and consult with other departments of SARCS, such as Disaster Management, to  get the international aid as fast as possible to where it is most needed.

There are places and times that the emergency vehicles cannot go.  More than four dozen SARCS volunteers have been reported killed or injured while performing their humanitarian work. Every bombing and disaster in Syria these days brings more applications to join the SARC volunteer teams.  Such is the character of the Syrian people, an amalgam of their history, culture, Arab nationalism and resistance stance.

As current events are demonstrating, the designers of the US-led sanctions, who are housed on the second floor of the US Treasury building in Washington DC, including the Office of Financial Assets Control (OFAC), have once more failed to understand the nature and the quality of the Syrian people.

One wonders if the same process unfolding the past few weeks of whereby foreign interests, now may be realizing  they have committed major “assessment errors” in Syria and reportedly reassessing their objectives, may now be willing to come to the negotiating table which currently has on it four serious proposals for discussion.

Only the presence of those currently absent from the dialogue table is needed to end the killing and start rebuilding homes, hospitals, infrastructures of every sort and equally essential, democratic freedoms for everyone in Syria.