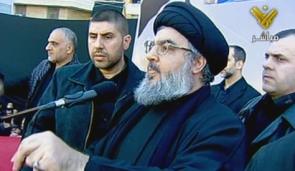 The simmering potential for another round of deadly battles between Israel and Lebanon’s powerful Islamic resistance movement, Hezbollah, has never quite faded away – despite a devastating war in 2006.

Over the years we’ve been accustomed to fight-to-the-death preparations by both sides, Israeli threats to turn the infrastructure of Lebanon back by 50 years, saber rattling over the ownership of offshore oil deposits and a continued state of belligerence stemming from the flight of unmanned aerial vehicles (UAV) over each other’s airspace.

But if ever there was a noticeable inflection in the usual rhetoric between the two immortal enemies, it was during a 2010 speech by Hezbollah’s leader, Sheikh Hassan Nasrallah.

The Sheikh, who is often noted for the cadence of rhythm in his speeches and has a very particular way of speaking in large grandiose terms, made unprecedented maritime threats to attack any military or commercial vessel heading towards Israeli waters — in the event of a future conflict.

Riding on the back of one victory after another, and recalling the guerilla movements tenacity to sink one of their warships in 2006 with the maiden voyage of its shore-to-sea missiles fired from a rooftop; the audacious defiance in the speech has sent alarm bells ringing in Tel-Aviv ever since.

Even senior Israeli Navy commanders have highlighted the potential and critical nature of this threat, and considering that 99 percent of all Israeli imports, which includes both civilian goods and military hardware, come via the shipping lanes; it’s no surprise why Hezbollah seeks to exploit this vulnerability.

And in order to counter the discrepancy between its own capabilities and that of Israel, whose bloodlust for destroying them is very much alive, Hezbollah (with the help of Iran) has been busy perfecting its ‘asymmetric approach’ to maritime warfare.

This has apparently included the assembling of miniature versions of Iran’s torpedo-carrying speedboats, themselves a reverse-engineered prototype of the British-built Bradstone Challenger, which have an average speed of between 63-83mph.

The idea is to be able to quickly deploy enough in order to carry out a ‘swarm’ tactic that saturates the defenses of, and attacks, Israeli warships and frigates in or around Lebanese coastal waters.

The speedboats, whose place of production and concealment from the prying eyes of Israeli and America’s spy satellites remains shrouded in mystery, are designed to fire their (jam-resistant) trajectories from a distance far removed from what would normally be construed as “threatening engagement” in open waters.

Alternatively, it could be counter-argued that a combination of Israeli Helicopter gunships coupled with UAV’s would be sufficient to destroy the threat of these speedboats and serve as a deterrent against their deployment.

But that’s in an equation, which doesn’t take into account Hezbollah’s relatively unknown and secretive anti-aircraft ability making successful hits against them.

According to informed sources close to the movement, the Islamic resistance has developed an underwater strategy far beyond the calculations that its combined military adversaries can predict – in order to have a second option at infiltrating Israeli waters and attacking both stationary ships as well as sensitive locations on or near Israeli ports.

It’s an open secret that they’ve been steadily stockpiling shore-to-sea as well as sea-to-sea based missile capabilities, as a first strike option.

These would no doubt respectively include Iranian variants of the Chinese C-802 cruise missile, as well as the Islamic Republic’s super cavitation ‘Hoot’ torpedo – which is a reverse-engineered form of the Russian ‘Shkval’ and is the fastest of its type in the world.

In saying this, considering Sheikh Nasrallah himself has publically admitted to Hezbollah acquisitions of Syrian armaments in the past, it’s unsurprising that Israeli analysts allude to the potential for the movement also being recipients of the best of Syria’s Russian supplied anti-ship stockpiles, including the 300-kilometre range “Yakhont”.

The same sources have also revealed that Hezbollah has developed incredibly sophisticated versions of both diver and underwater ‘propulsion vehicles’ in order to gain leverage in a conflict where its opponent has considerably superior technical, aerial and amphibious military advantages.

These are believed to include unique types of all four human-manned torpedoes: the two-frogmen manned ride-able vehicle, a kamikaze craft which is modeled on but many times more advanced, than the Japanese Kaiten deployed in World War Two, a prototype of the Soviet Protei-5 one-frogman vehicle and a subskimmer type.

The particular design, capacity, warhead and speed that can be traveled by each one is unknown, and is likely to remain so unless in the event of capture or destruction during a mission.

All that we can gauge is that most of the subaqueous machines, considering the relative distance between Hezbollah and Israeli waters, would probably be launched from coastal installations in South Lebanon, which is Hezbollah-friendly territory and away from exposure to the central government.

It is clear that with such acquisitions, the balance of power between Hezbollah and the Israel has been altered considerably.

In the past Israel would hit any target in Lebanon, in line with its deterrence doctrines, with complete impunity. It rightly calculated that its enemy’s capabilities were limited and in no-way able to threaten its strategic locations to dramatically change the threshold of options it had during a conflict.

This is now confined to the past .

Hezbollah, in line with Sheikh Nasrallah’s threats, can now willfully hit Israeli Navy ships, bases, commercial ships either in sea lanes or docking at its ports – as well as oil and gas rigs located in the Mediterranean Sea.

Yet if we go by the logic that Iran generously transfers to its Lebanese protégé the most feasible of its array of military equipment and technology, what else might Hezbollah have in its possession?

Perhaps there’s a reason a senior Hezbollah leaders recently stated that even in the event of a closure of the Lebanese-Syrian border, where conflict ranges on between the regime and rebels, his movement has enough arms stored to defend itself and the country.

But one thing for sure is that in the event of another flare-up, and with Hezbollah’s ability to choke the state of Israel by virtue of targeting its vulnerable sea ports and offshore infrastructure as real as ever, it could be the Jewish state which is rendered to battening down the hatches and prevent a mass exodus of its people for the first time since its creation in 1948.