Jeremy Griffith’s ‘Freedom’: A Book for Our Time

The front cover of Freedom boldly claims, ‘At last, the Liberation and Transformation of the Human Race Through the Finding of Understanding of the Human Condition’.

Confrontation and compassion, exposed and liberated, discomfort and defensiveness, explained and understood, shock and excitement. These are the range of emotions I encountered reading Australian biologist Jeremy Griffith’s latest work, Freedom – a book for our time with deep significance for all humans. It is the zenith of Griffiths 30 years spent studying, unraveling and explaining the human condition.

As early as the fourth paragraph Griffith gives context to and insight into the realm being explored – a realm few have dared penetrate. It reads, ‘To briefly explain what the human condition is, it arises from our species’ capacity for what has been called ‘good and evil’. Humans are capable of great kindness, empathy and love, but we are also capable of horrific atrocities like rape, murder and torture. Our human predicament or ‘condition’ has been that because we have never before been able to explain and thus understand where our species’ capacity for acts of shocking inhumanity comes from we each carry a deep, now almost subconscious, insecurity and sense of guilt about our value and worth as humans. Are we good or are we bad? Even in our everyday behavior, why are we humans competitive, aggressive and selfish when clearly the ideals are to be the complete opposite, namely cooperative, loving and selfless?’

Freedom is our story, both as a species and as individuals told in first principle biology, truthfully, compassionately and comprehensively. It may leave you in a state of initial shock and awe; such is the nature of the subject matter and the power of the explanation being presented.

However these works cannot be dismissed. The importance of the claims and the implications for our future warrant full consideration and debate as Professor Harry Prosen, former President of the Canadian Psychiatric Association stated, ‘I have no doubt this biological explanation of Jeremy Griffith’s of the human condition is the holy grail of insight we have sought for the psychological rehabilitation of the human race. I cannot urge you strongly enough to listen to what Jeremy Griffith has to explain’.

Griffith’s vitae is impressive. Raised in rural New South Wales, Australia, Griffith- a biologist, began writing about the human condition in 1975. Since then he has written six books, including the 2003 Australasian bestseller, revealingly titled ‘A Species in Denial’. Freedom the subject of this review, is Griffith’s definitive work, his comprehensive and complete treatise on the biological explanation and amelioration of the human condition. It was first published as an e-book in 2009 with extensive additions and editing in 2013.

The timeliness and significance of Freedom cannot be underestimated. As Australian journalist Richard Neville ominously and accurately described the state of the world, ‘The world is hurtling to catastrophe: from nuclear horrors, a wrecked ecosystem, 20 million dead each year from malnutrition, 600 million chronically hungry…All these crises are man-made, their causes are psychological. The cures must come from this same source; which means the planet needs psychological maturity…fast. We are locked in a race between self – destruction and self-discovery’. (Good Weekend Magazine, Sydney Morning Herald, 14 Oct 1986).

We live in a world with levels of anger, desperation and despair not seen before; where greed is endemic and the gap between the have and the have nots has never been wider,  a world where  religious wars rage, where the left and right wing in politics seem irreconcilably polarized, where the nightly news is too horrific to watch, where children as young as seven are being prescribed ADHD drugs and where new age movements, band aid solutions and ‘causes’ have become rife, proclaiming to save the environment, save your soul or save the world.

For all of our species collective achievements in science, religion, philosophy and psychiatry in their endeavor to understand and explain our world and the polarities of life – good and evil, love and war, science and religion, men and women, left wing and right wing, instinct and intellect, socialism and capitalism, etc., the stark reality is we are still ‘locked in a race between self – destruction and self-discovery’.

The world is in desperate need for unifying and real answers and solutions to the underlying cause of these problems we face.

From this seemingly hopeless and despairing path to ‘self-destruction’, Freedom presents this long sought after and desperately needed ‘self-discovery’. It presents the complete solution to real ‘peace on earth’ – through full biological explanation and understanding of our human condition that leads to the amelioration of that condition.

Freedom is broken into a number of sequential and easy to navigate parts taking the reader on a fascinating journey of discovery and enlightenment. Its explanatory power, grounded in first principle biology leads the reader through the psychological maturation of humanity, both collectively and individually. To try and summarize the close to 1,000 pages in this short review can in no way do justice to the content but what I will say is that the profound questions such as what is the meaning of life, how we acquired our conscience or ‘moral soul’, the development of consciousness and the origins of the human condition are completely explained. Explained compassionately in a way that will deeply resonate with you about what it is to be human.  Equally significant are the transforming implications addressed by Griffith in subsequent sections. The ability to now understand our human condition, in particular the dark side of our nature, liberates us from our underlying insecurity and sense of guilt, relieving and healing our condition, which ends the cycle of destruction plaguing our planet, transforming our world as we know it.

There are a handful of books that have withstood history’s litmus test – literary works that strike a deep chord in our psyche and transcend our day to day lives. They cut a swathe through life’s clutter and become timeless through generations by enlightening us, adding meaning to and explaining the world we live in and who we are. They leave a lasting imprint on the reader. Charles Darwin’s On the Origin of Species by Means of Natural Selection, the Bible, Plato’s Republic and the Iliad attributed to Homer have all contributed to humanity’s knowledge bank.

In time Freedom will not only stand alongside these literary monuments, it will have such a profound and transformative effect on humanity that its importance will be unsurpassed. This claim may sound preposterous, however it is only upon reading Freedom that you are able to comprehend and experience the depth of truth that Jeremy Griffith has explained about our human condition. 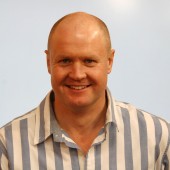 A senior manager in the financial industry, Anthony Landahl is a ‘boy from the bush’ at heart – fascinated with the outdoors and nature but also dedicated to understanding the inner world, of our human natures.