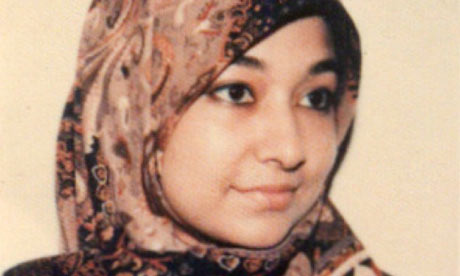 Dr Aafia Siddiqui as a student in a photo provided to The Guardian by her family.

Dr Aafia Siddiqui as a student in a photo provided to The Guardian by her family.

The only thing that surprised me when I heard that the Algerian kidnappers had called for the release of Dr Aafia Siddiqui was that it hadn’t happened sooner.

Don’t get me wrong, as a former hostage myself, there is no way I condone the actions of what has unfolded in a remote corner of the Algerian desert.

And my heart goes out to the families of those who have lost loved ones in the unfolding drama at a gas plant siege said to have been masterminded by Mohktar Belmokhtar. The infamous one-eyed Algerian militant apparently with ties to al Qaida, has claimed responsibility for launching Wednesday’s attack.

It also goes without saying there is no way the kidnappers, whether politically or criminally motivated, can be justified in their actions.

But an injustice is an injustice, and as the only western journalist to have specifically gone to Afghanistan to investigate the case of Dr Aafia Siddiqui, I have to say her plight has become a cause célèbre around the Muslim world.

And I have an uncomfortable feeling that more and more westerners will be kidnapped as their captors demand the release of Dr Aafia Siddiqui, a woman I once called the most wronged in the world.

So just who is Dr Aafia Siddiqui and why is a group of North Africans calling for her release?

Well, it’s very easy to get emotional about a wronged Muslim woman caught up in the War on Terror but

I am not basing my case on emotion just some simple cold, hard facts and forensic evidence … or lack of it, but more of that and her bizarre story  later.

Her family will certainly not be pleased that a group of Algerian terrorists have called for her release because it will give a perception in some quarters that Dr Aafia must be an Islamic extremist. It’s a narrative pushed by US intelligence although it has to be said in her trial the opening statement of the prosecutor stated quite clearly that she was neither al-Qaida nor a terrorist sympathizer.

The case of the mother-of-three is well known in every household in Pakistan from the most religious to the most secular—the majority of which have been demanding her repatriation for years. Now she is known as the Daughter of the Nation although her story has travelled well beyond Pakistan’s borders.

Thousands of Muslim children have been named after her because of all that she has come to symbolize. Everything that she represents stems from the injustices created by America’s War on Terror—the kidnaps, renditions, torture, rape and waterboarding.

The brilliant academic, educated in top US universities, is tonight languishing in a Texan jail serving an 86 year sentence after being found guilty of trying to kill American soldiers.

The fact they shot her at close range and nearly killed her is often overlooked.

To their eternal shame, the US soldiers serving in Afghanistan claimed in court under oath that the diminutive, fragile academic leapt at them from behind a prison cell curtain, snatching one of their guns to shoot and kill them. It was a fabricated story that any defense lawyer worth his or her salt would have ripped apart at the seams.

The scenario painted in court was incredulous and more importantly, the evidence non-existent – no gunshot residue on her hands or clothes, no bullets from the discharged gun, no fingerprints belonging to Dr Aafia on the gun; other vital evidence removed by US military from the scene went missing before the trial. Come on, we’ve all seen episodes of CSI – the science doesn’t lie.

After being patched up in a medical wing in Bagram, she was then renditioned to America to stand trial for an alleged crime committed in Afghanistan. Flouting the Vienna and Geneva Conventions, she wasn’t given consular access until the day she made her first court appearance.

The trial was held in New York, a stone’s throw from where the Twin Towers once stood, making it impossible not to invoke the memories of that horrific day on September 11 which for some forever turned Muslims into Public Enemy Number One.

A lack luster legal team forced on Dr Aafia by the US authorities failed to sway the jury of her innocence, despite the overwhelming scientific evidence that she could not have snatched a soldier’s gun let alone pull the trigger.

I went into the cell a few weeks after the shooting in July 2008 and discovered that the soldiers had panicked and sprayed the room with bullets as they struggled to flee. The evidence is there on film shot during my visit and handed over to the defense team.

Seeing Dr Aafia emerge unshackled and unhooded from behind a curtain caused blind panic among the young soldiers who had been briefed by the FBI they were going to arrest one of the most dangerous women in the world.

I interviewed eyewitnesses, senior Afghan police officers who one after another told me what happened. Yet the only Afghan brought to court to give testimony against her was the FBI’s translator, who now has a green card and lives in New York with his family.

What the jury was not told is that Dr Aafia, and her three children, all aged under five at the time, had been kidnapped from a street near their home in Karachi and disappeared from 2003.

The FBI put out a story at the time that she had in fact gone on a jihad to Afghanistan – it was a ludicrous tale without foundation and, as every mother of young children knows, a journey to the local corner shop with toddlers is a monumental challenge, so heading off to fight in Afghanistan with a pram, pushchair and toddler in hand is simply inconceivable. The FBI narrative was destroyed by Boston-based Elaine Whitfield Sharp, a lawyer hired by the Siddiqui family when Dr Aafia first disappeared.

The missing years of the academic’s life reveal a story which is now known to virtually everyone in the Muslim world, where she is widely regarded as a victim of George W Bush’s War on Terror.

As she tried to tell the jury how she was held in secret prisons, with no legal representation, cut off from the outside world since 2003, where brutal interrogation techniques were used to break her down, she was silenced by the judge who said he was only interested in the cell shooting incident.

Judge Richard Berman, a modest little man with much to be modest about, insisted he was not interested in the missing years; it had no relevance to the case, he insisted.

She testified that after completing her doctorate studies she taught in a school, and that her interest was in cultivating the capabilities of dyslexic and other special needs children. She emerged as a humanity-loving nurturer and educator, the gentle yet resolute seeker for truth and justice.

As the evidence continued we learned that she didn’t know where her three children were – it was sensational content for those who knew the real story. She talked of her dread and fear of being handed back to the Americans when she was arrested in Ghazni and was held by police.

Terrified that yet another secret prison was waiting for her she revealed how she peaked through the curtain divider into the part of the room where Afghans and Americans were talking, and how when a startled American soldier noticed her, he jumped up and yelled that the prisoner was loose, and shot her in the stomach. She described how she was also shot in the side by a second person. She also described how after falling back onto the bed in the room, she was violently thrown to the floor and lost consciousness. This ties in exactly with what I was told by the counter terrorism police chief I interviewed in Afghanistan back in the autumn of 2008 – I remember him laughing as he told me how the US soldiers panicked, shot randomly in the air as they stampeded out of the room in a blind panic.

Of course there’s no way a bunch of soldiers are going to admit they lost it, but according to those I interviewed for my film In search of Prisoner 650 in Afghanistan, that’s exactly what happened.

Two of her missing children have since been found and reunited with their extended family in Karachi. It is still not clear where the children were held when they were snatched from a street in Karachi, but there’s no disguising their American accents—possibly picked up from their jailers.

So why did the FBI want to speak to Dr Aafia in the first place, and why did they portray her as a dangerous terrorist on the run? If she was the person they painted, why wasn’t she charged with terrorism offences and why was the prosecutor at pains to point out that she was not al Qaida?

One person who might hold the key is Dr Aafia’s ex-husband, who has resisted attempts to be interviewed by me. He was going through a very combative and bitter divorce in the months before she disappeared. He first came to the attention of the FBI in 2002 when he was living in America, but what he told them that would lead them to suspect his ex-wife of wrongdoing is anyone’s guess.

The bottom line is Dr Aafia Siddiqui should not be in prison, and as long as this injustice continues, she will become a rallying call for anyone who wants to pick a fight with America.

Acknowledging the injustice and returning Dr Aafia to her home in Pakistan will not stop extremists from causing terror, but it might make the lives of US citizens a lot safer if this wrong is put to right.