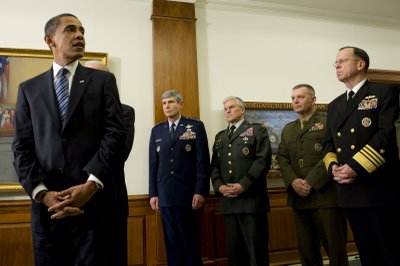 When Sen. Barack Obama ran for the presidency in 2008, many wishful-thinking Democratic voters viewed him as a peace candidate because he opposed the Iraq war (but voted yes on the war budgets while in the Senate). Some others assumed his foreign/military policy would be along the lines of Presidents George H. W. Bush (whom Obama admires) or Bill Clinton. Some who identified as progressives actually thought his foreign/military policy might tilt to the left.

Instead, center rightist that he is, Obama’s foreign/military policy amounted to a virtual continuation of George W. Bush’s Global War on Terrorism under a different name. He extended Bush’s wars to Pakistan, Yemen, Somalia, Libya and elsewhere while greatly expanding the war in Afghanistan, hiking the military budget, encouraging the growth of militarism in U.S. society by repeatedly heaping excessive praise on the armed forces, and tightening the military encirclement of China.

Summing up some of his military accomplishments a few months ago, Obama declared: “We’ve succeeded in defending our nation, taking the fight to our enemies, reducing the number of Americans in harm’s way, and we’ve restored America’s global leadership. That makes us safer and it makes us stronger. And that’s an achievement that every American — especially those Americans who are proud to wear the uniform of the United States Armed Forces — should take great pride in.”

Obama actually has little to show for his war policy after nearly four years. Most importantly, Afghanistan — the war he supported with enthusiasm — is predictably blowing up in his face. A symbol of the Bush-Obama 11-year Afghan folly is the recent 2,000th death of an American soldier, not at the hands of the Taliban, but a U.S.-trained Afghan police officer, our supposed ally. The truth is that public opinion in Afghanistan has always overwhelmingly opposed the invasion, and rightly so.

Obama hopes to avoid the embarrassment of a takeover by the Taliban or another violent Afghan civil war (as happened in the 1990s) after the bulk of U.S. troops pull out at the end of 2014. He’s made a deal with the Kabul government that allows Washington to keep thousands of American troops — Army, CIA agents with their drones, elite Special Operations forces and pilots — until 2024. There are two reasons for this. One is to keep a U.S.-controlled government in Kabul as long as possible. The other is to station American combatants near Afghanistan’s borders with Iran to the west and China to the east for another 10 years, a verdict hardly appreciated in Tehran and Beijing.

The Middle East is in turmoil. Israel’s still threatening to attack Iran, an act that would transform turmoil into catastrophe. The Syrian regime refuses to fall, much to Washington’s chagrin. Egypt’s new government has just declared partial independence from Washington’s longstanding domination. The plight of the Palestinians has worsened during Obama’s presidency. Relations with China and Russia have declined.

Very few of Obama’s 2008 foreign/military election promises have come to fruition. He said he would initiate a “new beginning” in relations with the international Muslim community which had reached a low point under Bush. America’s popularity jumped after the president’s promising Cairo speech in 2009. But now, after repeatedly attacking Muslim countries with drone assassins, the rating is only 15% positive, lower than when Bush was in command.

Obama had promised to improve relations with Latin America, get diplomatically closer to Iran and Cuba, settle the Israel-Palestine dispute and close Guantanámo prison, among a number of unrealized intentions.

All the foreign developments the Democrats could really brag about at their convention were ending the war in Iraq “with heads held high” as our legions departed an eight-year stalemated conflict that cost Uncle Sam $4 trillion, and assassinating al-Qaeda leader Osama bin-Laden (which drew the most enthusiastic of those jingoist “USA! USA! USA!” chants from Democratic delegates).

Actually, Bush ended the Iraq war by signing an agreement with the Baghdad regime — before the new president took office — to pull out all U.S. troops at the end of 2011. Obama supported the treaty but tried unsuccessfully until the last minute to coerce the Iraqis to keep many thousands of American troops in the country indefinitely. (Antiwar.com reported Oct. 2 that up to 300 U.S. soldiers and security personnel have been training elite Iraqi security forces for months.)

Obama as warrior president discombobulated the Republicans who in past elections always benefited from portraying the Democrats as “weak on defense.” Efforts to do so this year have fallen flat after the president in effect melted down his undeserved Nobel Peace Prize to make more bullets. Obama also obtained a second dividend. He wasn’t besieged by antiwar protests as was his predecessor, because most anti-Bush “peace” Democrats would not publicly oppose Obama’s militarist policies. (This essentially destroyed the mass U.S. antiwar movement, which has been kept going on a much smaller scale by the left and the pacifists.)

Throughout Obama’s election declarations he occasionally speaks of, and exaggerates, increasing threats and hazards confronting the American people that only he can manage. He told the convention that the “new threats and challenges” are facing the country. Romney does the same thing, in spades. Overstating the threats confronting the U.S. is a perennial practice for Democratic and Republican presidents and candidates. George W. Bush brought this dishonest practice to an apogee, at times sounding as though he was reciting a Halloween ghost story to gullible children — but this year’s candidates are no slackers.

Historian and academic Andrew J. Bacevich, an Army colonel in the Vietnam War and now strongly opposed to America’s wars, mentioned fear-mongering in an article published in the January-February issue of The Atlantic magazine. He writes: “This national-security state derived its raison d’être from — and vigorously promoted a belief in — the existence of looming national peril…. What worked during the Cold War [fear of the ‘Communist menace’ and nuclear war] still works today: to get Americans on board with your military policy, scare the hell out of them.”

The main purpose of this practice today is to frighten the public into uncomplainingly investing its tax money into the largest military/national security budget in the world — about $1.4 trillion this year (up to $700 billion for the Pentagon and an equal amount for national security).

This accomplishes two objectives for that elite ruling class that actually determines the course of empire: First, it sustains the most powerful military apparatus in history, without which the U.S. could hardly function as world leader (yes it has the biggest economy, but look at the shape it’s in). Second, it constitutes a huge annual infusion of government cash — a stimulus? — into the economy via the military-industrial complex without the “stigma” of being considered a welfare-like plan to create jobs or benefit the people.

The White House and Congress talk about reductions in military spending, and there may be some cuts by eliminating obsolete defense systems — but over the decade the budget will continue to expand. Obama said to the convention, and Romney will pledge the same if elected — “As long as I am Commander-in-Chief we will sustain the strongest military in the world.”

This has been a sine qua non for election to the presidency for decades. It is so familiar and so justified by official scare stories that most Americans don’t think twice about paying an annual national fortune to maintain the most powerful military machine in the world to deal with a few thousand opponents with relatively primitive weapons many thousands of miles away. The U.S. military, of course, has an entirely different purpose: at a time of gradual U.S. decline and the rise several other countries such as Brazil, India and China, among others — Washington’s military power is intended to keep the United States in charge of the world.