The Mass Insanity of American Voters 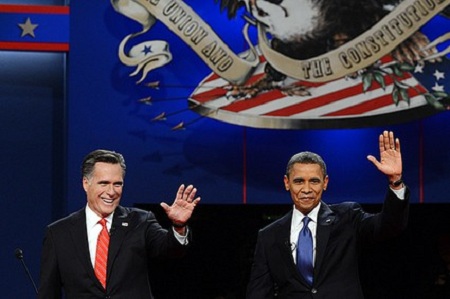 When American voters cannot agree that if a president violates his oath of office to preserve, protect, and defend the Constitution of the United States of America, he should be disqualified from consideration for reelection, there exists a serious problem. Similarly, when a candidate for the presidency seeking to challenge the incumbent makes clear his intention to maintain the status quo and perpetuate the existing criminal establishment order, and American voters cannot agree that this should disqualify him from consideration, there exists a serious problem.

The standard argument one comes across when confronted with individuals who plan on voting for either Barack Obama or Mitt Romney is that “We must vote for the lesser of two evils!” One hears this standard refrain time and time again, the reasoning being that if we don’t vote for the “lesser” evil, then the “greater” evil will gain power. The argument goes that if you don’t vote for either evil, then you are “throwing away your vote” and thereby effectively voting for the “greater” evil for not helping to increase the chances that the “lesser” evil will win. Consequently, you will be responsible for the even more disastrous consequences of the policies that the “greater” evil will pursue.

When confronted with the “lesser of evils” argument, one might be tempted to inquire: Why must we vote for evil? Shouldn’t we rather oppose it and not vote for it? After all, it takes no great feat of cognition to recognize that this logic serves only to perpetuate evil on an ever increasing scale as Americans incrementally lower their standards every election cycle for what currently existing evils they are willing to accept and tolerate in order to supposedly prevent even worse evils in the future.

Now, when one points this out to someone who has just offered up the standard “lesser of evils” argument, a typical response is for them to try to backtrack by saying something like, “Well, I don’t really think (insert candidate) is ‘evil’.” They then will list things their candidate has done or positions they have that they think are good, and perhaps add a comment like, “It’s unrealistic to expect there to be a candidate who is perfect”, or something similar—which will bring the conversation right back around to the above points about candidates doing certain criminal things or having certain unjustifiable positions that should disqualify them from consideration. And then if you therefore ask such individuals if their standards are so low that they consider a president violating his oath of office to be merely “imperfection”, they will typically say something like, “Well, I’m not voting for those bad policies, I’m only voting for his good policies.” And then if you point out that they just contradicted their own argument that if you don’t vote for the “lesser” evil with them, then you will be responsible for all the bad things that the “greater” evil will do, they will probably begin to start saying slightly less predictable things, such as telling you what a naïve idealist you are for believing in utopian fantasies, and so on.

The Devil himself would be hard pressed to come up with a more effective means by which to corrupt an entire nation—to make a society into a people without principle, a people who meaninglessly spout empty words about moral values while accepting and even defending the lawlessness of their government and actively struggling to maintain the criminal establishment order—than to convince the masses that they “must vote for the lesser of two evils”.

And if the existing establishment order wished to overthrow the Constitution, turn the U.S. into a totalitarian police state, and enslave the population, it would be the simplest thing for it to do, so long as Americans continued to cling to this logic. All it would need to do would be to create an illusion of “choice” each election cycle between two amenable, pro-establishment candidates who would both continue down this path towards tyranny, albeit each at a slightly different pace or with different sounding rhetoric, and the American sheeple, content to bicker with each other over which of these two candidates would pursue their enslavement at the slower pace, would just continue to vote in favor of legitimizing and further entrenching the violations of the Constitution, loss of their Liberty, illegal wars, murderous criminality, etc., that had occurred over the previous four years in order to supposedly prevent the very same from hypothetically occurring in the future on an even greater scale under the other guy. So long as the establishment would present one candidate who adopts positions that are even more extreme than the other, even more frightening to contemplate than the horrors that exist under the present status quo, then Americans would be incrementally made into obedient serfs who would vote to have themselves shackled and chained so long as it meant keeping the guy from their party in power. And in the end, it wouldn’t really matter which party’s candidate a plurality of Americans decided was the “lesser” evil, because the ship of state would remain steady on course regardless.

It is remarkable that this kind of commitment to ideology straight down party lines exists in this day and age, the age of information and the internet, and yet one may still come across many Americans who consider the Democratic party to be the yin to the Republican party’s yang. The very language used in political discourse of “left” vs. “right” reinforces this downright delusional paradigm. Then there are Americans who recognize that there is largely a consensus across party lines on pretty much all of the most crucial issues, but they tend to focus on those areas where there are subtle differences, real or perceived. Missing the forest for the trees, they argue that we must feed this monster rather than that one, to stop that one from devouring us, all the while failing to see how futile this is since they are just two heads of the same hydra, and the only way to stop it from further devastation is to just stop feeding the beast altogether.

We may see how application of this “lesser of evils” logic has worked out so far this century. In the 2000 election, anyone who did not vote for either of the two pro-establishment candidates was considered to have “thrown away” their vote. But where is the logic in the argument that having voted for either of the two pro-establishment candidates and thus having voted to perpetuate the status quo was not throwing away their vote? One would think that, if the goal was actually to effect real and meaningful change, it would be more logical to say that anyone who voted for the Democratic or the Republican candidate wasted their vote. In that election, it was not exactly clear which candidate a plurality of Americans actually viewed as the lesser evil, so the Supreme Court stepped in and decided for them.

And then after four years of Bush, a plurality of Americans cast their votes to reelect him to a second term, thereby signaling to the establishment that the trampling of the Constitution, the loss of Liberty, the torturing of prisoners, the murderous war on Iraq, etc., was acceptable to them, just so long as a Republican was in the Oval Office. The message received by Washington was that the president could violate his oath of office and commit high crimes for which the Constitution demands he be impeached and for which he should be tried for war crimes under international law, and this was all okay with the American people and could be carried out in their name. The message received in Washington was confirmation that Americans would accept the extraordinary criminality of the existing establishment so long as a plurality of them voted to legitimize it on the basis of the belief that not doing so would result in some even greater evil if the other party’s candidate won.

Although Bush was elected into office on a platform of limited government, free markets, minding our own affairs internationally, “no nation building”, etc., and although he proceeded to put the lie to his rhetoric by implementing opposite policies, his supporters continued to back him anyway and voted to reelect him in 2004 simply because he was their party’s guy, and if they voted for a third-party candidate, the Democratic party’s guy might win. This blind loyalty to party was—it should by now be uncontroversial to say—absolutely disastrous for the country. By voting to reelect Bush, a plurality of Americans were responsible for legitimizing, in the eyes of the establishment order, the violent crimes and authoritarian usurpations of power by the U.S. government.

Even so, by the end of Bush’s second term, Americans were finally beginning to wake up to the realities of just how disastrous eight years of Bush had been. Even many conservative voters had become disillusioned with what had transpired under his two terms, and the liberals and independents had begun to effectively mobilize against the government’s criminal policies. And then along came Obama, with his empty rhetoric about “hope” and “change”, perfectly transparent at the time to anyone who took the time to parse his words and analyze them for any real underlying meaning. Even many of those who largely recognized the vacuousness of his lofty-sounding rhetoric were convinced that he was the “lesser evil”. All it took for the establishment to ensure that there was no rollback of the policies that were implemented under Bush was to pit Obama against someone who would be regarded by more Americans as the “greater evil”. Enter Bush-policy advocate and warmongerer extraordinaire John McCain.

Unsurprisingly, Obama won, and many liberals went back  to sleep, satisfying themselves in their sense of accomplishment and false sense of security that now that they had cast their ballot and a Democrat was in the White House, rather than one of these Republican warmongers, things would be okay. And then, rather than rolling them back, Obama proceeded to complete the institutionalization of Bush’s policies so as to cement them into permanency.

By declaring his empty promise to close Guantanamo, for instance, he succeeded in obtaining Americans’ acquiescence for the system of military detentions, which he made clear from the beginning he would continue. He succeeded in gaining Americans’ acceptance of the usurpation of Executive authority under which this system was established and the basic framework under which it operated. He ended, so far as we know, the use of “enhanced interrogation techniques”—otherwise known as torture—while refusing to renounce the assumed unconstitutional power of the Executive to authorize such human rights abuses and while preventing those responsible for implementing this policy from being held accountable for violating U.S. and international law.