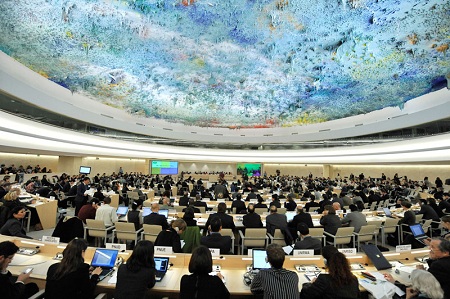 The United Nations Human Rights Council at its recent sessions held in Geneva, adopted a US-sponsored resolution against Sri Lanka, expressing dissatisfaction with the pace of reconciliation and accountability since the end of the war with the LTTE, urging the government to make haste in implementing the recommendations of its own Lessons Learnt and Reconciliation Commission, and also calling for other more credible measures to ensue accountability.  The resolution also promises “technical assistance” to further these ends.  The basic problem with the resolution, from the Sri Lanka government’s point of view, is that the attempt to judge a nation’s intentions or sincerity in carrying out certain reforms, instead of what it has already done or is doing with regard to those same matters, is a violation of fundamental concepts in international law such as sovereignty and non-interference in the domestic affairs of a country, among others.  Ambassador Tamara Kunanayakam, Sri Lanka’s representative at the HRC, has said, “They are judging our intentions, not the ground reality…. [I]t gives a role to the Council that was never intended.”[1]  She has also said, “A resolution on Sri Lanka will, many feel, be the ultimate test of the Council’s politicization. It will make it or break it.”[2]

Ambassador Eileen Chamberlain Donahue, the USrepresentative, has pointed out some of the difficulties the resolution entails from the American point of view:  “The case of Sri Lankais different and difficult.  It is essentially dealing with large-scale civilian casualties, allegations of government involvement in large-scale civilian casualties during a civil war that took place over many years, but ended in 2009.  It’s not an on-going crisis, and for that reason it’s slightly more challenging.”[3] So, theUS is itself admitting that there’s no ongoing “crisis” inSri Lanka, and that this makes the resolution “difficult.” Meanwhile, at least prima facie, it is clear that the attempt to judgeSri Lanka’s “intentions” is a violation of the sovereignty and freedom of action allowed every nation under international law.  All this therefore raises the interesting and crucial question as to why theUS is still willing to pursue the matter with such single-minded focus?  Why isSri Lanka suddenly so important to theUS?  Explanations, theories, and conjectures abound.  The purpose of this essay is to briefly consider some of the main explanations, and to give an assessment as to the best one.

There are four explanations generally given for why the Americans are acting as they are:  first, that they are pursuing the R2P (“Responsibility to Protect”) agenda; second, “domestic pressure” (i.e., pressure coming from the Tamil diaspora); third, what can be called the “they hate us” explanation (i.e. they are jealous of our success in defeating terrorism and certain other matters); and fourth, “geopolitics.”  In my view, the first is the best and most likely explanation, while the other three, though perfectly reasonable, can’t quite explain, individually or in combination, the particular intensity and focus with which the USseems to be pursuing Sri Lanka. I argue, however, that the R2P connection to Sri Lankaand to this resolution in particular is relevant in a slightly different way than has hitherto been explored in public discussions, but to see this, one has to set it in context with the other explanations. So, let’s first review the latter, starting with “domestic pressure.”

It is indisputable that there is a powerful pro-Tamil Lobby in countries likeBritainandCanada.  The question, however, is whether the Tamil Lobby in theUnited Statesis powerful enough to exert direct pressure on the government at its highest levels, particularly at the level of the policy-making apparatus.  InBritainandCanada, this may indeed be the case.  With regard toBritain, for instance, there is evidence that UK-based Tamils may have the ability to influence if not dictate the priorities of no less than a Foreign Secretary.

A Wikileaks cable reveals that former British Foreign Secretary David Miliband’s frantic shuttle-diplomacy to Sri Lanka during the last stages of the war, ostensibly to plead the cause of the civilians trapped in the conflict zone, may well have been to win Tamil votes back home.  The cable details the assessment of seniorUSdiplomats inLondon, of conversations they had with one Tim Waite, the Sri Lanka Desk “team leader” at the British Foreign Office:

Waite said that much of HMG and ministerial attention to Sri Lankais due to the “very vocal” Tamil Diaspora in the UK, numbering over 300,000 and who have been protesting in front of Parliament since April 6.  He said that with UKelections on the horizon and many Tamils living in Labour constituencies with slim majorities, the Government is paying particular attention to Sri Lanka, with Miliband recently remarking to Waite that he was spending 60 percent of his time at the moment on Sri Lanka.[4]

To turn to Canada, Martin Collacott, a former Canadian High Commissioner to Sri Lanka, has pointed out that Canadian Diaspora Tamils once prevented the government from designating the LTTE a terrorist organization.  Writing in the National Post, he says,

Canada’s failure to label the Tigers as terrorists … contravenes the recommendation of CSIS (Canadian Security Intelligence Service) which is the Canadian agency best suited to determining the nature of militant groups.  The reason for the government’s failure is clear.  Through intimidation tactics, the LTTE exercises a considerable measure of control over members of the Tamil community. LTTE-friendly community leaders are willing to ensure that liberal candidates win votes in Tamil-heavy urban constituencies, provided the federal government turns a blind eye to fundraising.[5]

The question, however, as I have pointed out, is whether Tamils in the US have the same capacity and clout to exert direct pressure at the highest levels of the government.  The US certainly has a significant population of Tamils (over 300,000 by some estimates[6]) but due to the way US Congressional districts are demarcated by slicing through various demographic groups, it is unclear whether US-based Tamils, even in places where they are numerically concentrated, can leverage themselves to become a crucial swing-vote in close elections.  It may be that US-based Tamils have an “ace up their sleeve” of this kind, but in my view it is unlikely, or at any rate the matter has not been adequately investigated as yet.  Until there’s some certainty on the matter, until someone shows exactly how, or through what channels, or through some other type of concrete evidence or corroboration, that the influence is being exerted, we can’t use it as a basis for an explanation.

We next turn to the “they hate us” explanation.  What this explanation says, in essence, is that the US (and the West) is jealous or envious of Sri Lanka’s success at defeating terrorism, and in general, in pursuing an independent path with respect to its interests and developmental goals (and having some positive results to show for it).  In this regard, a remark by well-known lawyer and political commentator S.L. Gunasekera is interesting, because it captures something of the frustration felt by many Sri Lankans:

There can be little doubt that the Resolution before the HRC was borne, not out of any kind of concern for human rights or justice, but out of the limitless pique of the West that we “WOGS” had what they deem to be “impertinence” and “insolence” to spurn their advice to commit national suicide by declaring a “ceasefire” when we were on the point of defeating the LTTE, and that we succeeded in defeating them and restoring a very significant degree of peace in our land, whereas the West has only failure to show for their endeavors in those countries which suffered from their “tender ministrations”—the wholly chaotic situations that exist in Iraq, Afghanistan, Libya, etc., etc.[7]

The explanation is quite reasonable, and it also makes a certain amount of intuitive sense.  The crucial question, however, is whetherSri Lanka’s smug attitude, behavior or recalcitrance is enough to cause American planners, who are usually seasoned professionals, men and women operating from very rational assessments of theUS’s long-term interests, to contemplate “regime change.”  In my view, for the US to contemplate “regime change,” the country that is targeted either has to have some resource of overwhelming value, or have some other capacity to threaten core American interests in a concrete and definable way.  (As a general matter, it should be remembered that the notion of a “threat of a good example,” as it has been used in other contexts, for instance to explain American actions in the Vietnam War, is that the targeted country possesses some idea, philosophy or outlook that it can export to other countries, that in turn can have a concrete and definable impact on American interests, in terms of negating or countermanding the ideas, ideologies, philosophies, and doctrines that America itself holds dear, and which, in effect, sustain the American system.)