The Syrian Peace Plan Is a Joke 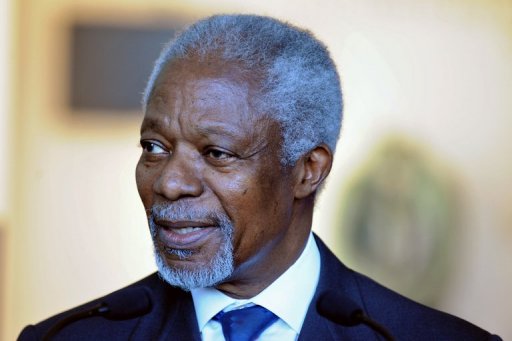 Currently in the news, there is much talk of how the UN-Arab League sponsored peace plan is falling apart. Most recently, there is the discussion of how Syrian troops fired rounds across the Turkish border. Yet, the peace plan is not meant to stop the violence, rather it is meant as a ploy to demonize the Assad government even further and to push for intervention.

(1) commit to work with the Envoy in an inclusive Syrian-led political process to address the legitimate aspirations and concerns of the Syrian people, and, to this end, commit to appoint an empowered interlocutor when invited to do so by the Envoy.

(2) commit to stop the fighting and achieve urgently an effective United Nations-supervised cessation of armed violence in all its forms by all parties to protect civilians and stabilize the country.

(3) ensure timely provision of humanitarian assistance to all areas affected by the fighting, and to this end, as immediate steps, to accept and implement a daily two-hour humanitarian pause and to coordinate exact time and modalities of the daily pause through an efficient mechanism, including at local level;

(4) intensify the pace and scale of release of arbitrarily detained persons, including especially vulnerable categories of persons, and persons involved in peaceful political activities, provide without delay through appropriate channels a list of all places in which such persons are being detained, immediately begin organizing access to such locations and through appropriate channels respond promptly to all written requests for information, access or release regarding such persons;

(5) ensure freedom of movement throughout the country for journalists and a non-discriminatory visa policy for them;

(6) respect freedom of association and the right to demonstrate peacefully as legally guaranteed. [1]

The entire plan puts the emphasis for solving the conflict on the Assad government, ignoring the fact that there is an armed opposition that also needs to put down its weapons and come to the table. The most the plan mentions about the opposition is that “Similar commitments would be sought by the Envoy from the opposition and all relevant elements to stop the fighting.”

Nowhere does it explicitly state that the opposition itself must stop fighting. Despite this major flaw in the plan, the Al Assad government agreed to implement it; however, they wanted the same commitments from the opposition as well.

This is a major problem for the West and its Middle Eastern puppets as they are arming and financing the Syrian opposition in a bid to overthrow Al Assad. This can be seen by the fact that there were recently 13 French officers captured by the Syrian military.[2] Thus, the West doesn’t require the armed opposition to obey the UN peace plan as it would hinder their goal of overthrowing Al Assad.

After the Al Assad government agreed to the peace plan, there were still clashes against opposition forces, thus leading the Syrian government to demand there be written guarantees from the opposition to stop fighting. However, this was rejected by the Free Syrian Army, with their leader saying that they “[do] not recognize the regime ‘and for that reason we will not give guarantees.’” However, he still argued that “the government should withdraw its forces to bases and remove checkpoints from streets.”[3] This is quite hypocritical as a ceasefire is a two-way street; if one side puts down their arms, than the other side must reciprocate or there can be no ceasefire. Yet, this is where the shaping of the peace plan comes in; the onus is put on the Al Assad government to stop fighting, however, it doesn’t force the opposition to do the same, rather it allows for the opposition to continue with its violent acts. By doing this, it is forcing the Al Assad government to break the peace plan, thus demonizing them and creating a situation that allows for the West and its allies to continue their support for the Syrian opposition.

Yet, in looking at the peace plan, one must also look at who wrote it: Kofi Annan. Annan, currently the UN-Arab League envoy to Syria, is part of the imperial apparatus as he was a part of the Ford Foundation, which has deep connections to the CIA.[4] In his September 20, 1999 speech as the UN Secretary General, using Bosnia and Rwanda as examples, argued that in those cases “the States had failed in their duty to protect their own people. He therefore concluded that the sovereignty of States, guiding principle of the UN Charter, constitutes an obstacle to human rights protection.”[5] (emphasis added) Thus, he started the basis of what would become known as ‘Responsibility to Protect,’ a doctrine which has been used by the West to intervene in countries in order to overthrow regimes that refuse to bow down to them.

More recently, there has been talk of the incident where Syrian soldiers fired at people across the Syrian-Turkish border resulting in the death of a cameraman and five people being wounded. However, what is being ignored is the fact that the Syrian soldiers may have been firing at rebels. NPR states that “The Syrian soldiers were believed to be firing at rebels who tried to escape to the refugee camp after ambushing a military checkpoint, according to the Britain-based Syrian Observatory for Human Rights, citing a network of sources on the ground.”[6] One must also realize the role Turkey has played in the Syrian conflict. They have sent officers into Syria. In February, it was reported that “more than 40 Turkish intelligence officers were captured by the Syrian army.”[7] In addition to this, they have in the past made threats that they were going to intervene in Syria.[8] Thus Turkey itself is supporting the Syrian opposition and cannot be trusted.

The peace plan is nothing but a joke meant to force the Al Assad government to break the plan, thus allowing for the West and its allies, specifically Turkey, to intervene in Syria and create a puppet regime. This will only aid in the efforts to hurt Iran as Syria is Iran’s main regional ally and if Syria collapses, Iran will truly be isolated. This attempt at ‘peace,’ is truly an attempt at war.