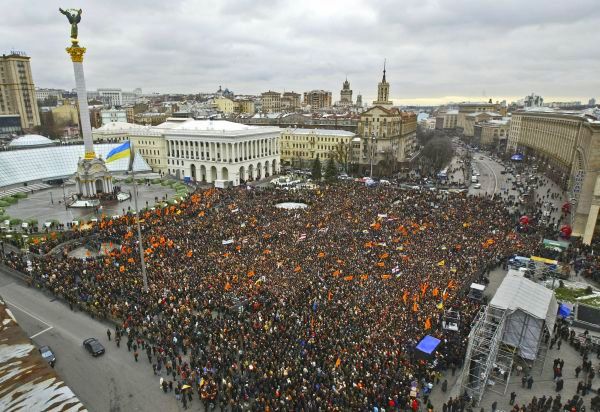 Non-governmental organizations are an increasingly important part of the 21st century international landscape performing a variety of humanitarian tasks pertaining inter alia to issues of poverty, the environment and civil liberties. However, there is a dark side to NGOs. They have been and are currently being used as tools of foreign policy, specifically with the United States. Instead of using purely military force, the US has now moved to using NGOs as tools in its foreign policy implementation, specifically the National Endowment for Democracy, Freedom House, and Amnesty International.

According to its website, the National Endowment for Democracy (NED) is “a private, non-profit foundation dedicated to the growth and strengthening of democratic institutions around the world,”[1] however this is sweet-sounding description is actually quite far from the truth.

The history of the NED begins immediately after the Reagan administration. Due to the massive revelations concerning the CIA in the 1970s, specifically that they were involved in attempted assassinations of heads of state, the destabilization of foreign governments, and were illegally spying on the US citizens, this tarnished the image of the CIA and of the US government as a whole. While there were many committees that were created during this time to investigate the CIA, the Church Committee (led by Frank Church, a Democrat from Idaho) was of critical importance as its findings “demonstrated the need for perpetual surveillance of the intelligence community and resulted in the creation of the permanent Select Committee on Intelligence.”[2] The Select Committee on Intelligence’s purpose was to oversee federal intelligence activities and while oversight and stability came in, it seemed to signal that the CIA’s ‘party’ of assassination plots and coups were over. Yet, this was to continue, but in a new way: under the guise of a harmful NGO whose purpose was to promote democracy around the world—the National Endowment for Democracy.

The NED was meant to be a tool of US foreign policy from its outset. It was the brainchild of Allen Weinstein who, before creating the Endowment, was a professor at Brown and Georgetown Universities, had served on the Washington Post’s editorial staff, and was the Executive Editor of The Washington Quarterly, Georgetown’s Center for Strategic and International Studies, a right-wing neoconservative think tank which would in the future have ties to imperial strategists such as Henry Kissinger and Zbigniew Brzezinski.[3] He stated in a 1991 interview that “A lot of what we do today was done covertly 25 years ago by the CIA.”[4]

The first director of the Endowment, Carl Gershman, outright admitted that the Endowment was a front for the CIA. In 1986 he stated:

We should not have to do this kind of work covertly. It would be terrible for democratic groups around the world to be seen as subsidized by the CIA. We saw that in the ‘60s, and that’s why it has been discontinued. We have not had the capability of doing this, and that’s why the endowment was created.[5] (emphasis added)

It can be further observed that the Endowment is a tool of the US government, as ever since its founding in 1983, it “has received an annual appropriation approved by the United States Congress as part of the United States Information Agency budget.”[6]

No sooner than the Endowment was founded did it begin funding groups that would support US interests. From 1983 to 1984, the Endowment was active in France and “supported a ‘trade union-like organization that for professors and students’ to counter ‘left-wing organizations of professors,’”[7] through the funding of seminars, posters, books, and pamphlets that encouraged opposition to leftist thought. In the mid and late 1990s, the NED continued its fight against organized labor by giving in excess of $2.5 million to the American Institute of Free Labor Development which was a CIA front used to undermine progressive labor unions.

Later on, the Endowment became involved in interfering with elections in Venezuela and Haiti in order to undermine leftwing movements there. The NED is and continues to be a source of instability in nations across the globe that don’t kneel before US imperial might. Yet the Endowment funds another pseudo-NGO: Freedom House.

Freedom House was originally founded in 1941 as a pro-democracy and pro-human rights organization. While this may have been true in the past, in the present day, Freedom House is quite involved in pushing US interests in global politics and its leaders have connections to rather unsavory organizations, such as current Executive Director David Kramer being a Senior Fellow to the Project for the New American Century, many of whose members are responsible for the current warmongering status of the US.[8]

During the Bush administration, the President used Freedom House to support the so-called War on Terror. In a March 29, 2006 speech, President Bush stated that Freedom House “declared the year 2005 was one of the most successful years for freedom since the Freedom House began measuring world freedom more than 30 years ago” and that the US should not rest “until the promise of liberty reaches every people and every nation” because “In this new century, the advance of freedom is a vital element of our strategy to protect the American people, and to secure the peace for generations to come.”[9]

Later, it was revealed that Freedom House became more and more supportive of the Bush administration’s policies because of the funding it was getting from the US government. According to its own internal report in 2007, the US government was providing some 66% of funding for the organization.[10] This funding mainly came from the US Agency for International Development (USAID), the US State Department, and the National Endowment for Democracy. Thus, we see not only the political connection of Freedom House to US government, but major financial connections as well.

It should be noted, however, that Freedom House was not alone in supporting the government. Under the Bush administration, the US government forced NGOs to become more compliant to their demands. In 2003, USAID Administrator Andrew Natsios stated in a speech given at a conference of NGOs that in Afghanistan the relationship between NGOs and USAID does affect the survival of the Karzai regime and that Afghans “believe [their life] is improving through mechanisms that have nothing to do with the U.S. government and nothing to do with the central government. That is a very serious problem.”[11] On the situation in Iraq, Natsios stated that when it comes to NGO work in the country “proving results counts, but showing a connection between those results and U.S. policy counts as well.”[12] (emphasis added) NGOs were essentially told that they were tools of the US government and were being made part of the imperial apparatus.

Most recently, Freedom House was active in the Arab Spring, where they aided in the training and financing of civil society groups and individuals “including the April 6 Youth Movement in Egypt, the Bahrain Center for Human Rights and grass-roots activists like Entsar Qadhi, a youth leader in Yemen.”[13]

While the Endowment and Freedom House are being used as tools of US foreign policy that does not mean that the US government isn’t looking for new tools, namely Amnesty International.

The human rights organization Amnesty International is the newest tool in the imperial toolbox of the American Empire. In January 2012, Suzanne Nossel was appointed the new Executive Director of Amnesty International by the group itself. Before coming to Amnesty, Nossel already had deep connections to the US government as she had “served as Deputy Assistant Secretary for International Organizations at the U.S. Department of State.”[14]

Nossel is known for coining the term ‘smart power’ which she defined as knowing that “US interests are furthered by enlisting others on behalf of U.S. goals, through alliances, international institutions, careful diplomacy, and the power of ideals.” While this definition may seem harmless, ‘smart power’ seems to be an enhanced version of Joseph Nye’s ‘soft power,’ which itself is defined as “the ability to obtain the outcomes one wants through attraction rather than using the carrots and sticks of payment or coercion.”[15] A possible example of this ‘smart power’ is the war in Libya, where the US used the UN as a means to get permission to engage in ‘humanitarian intervention.’

Yet, even before Nossel was appointed to Amnesty, the group was unwittingly aiding in the media war against Syria. In a September 1, 2011 Democracy Now interview, Neil Sammonds, the researcher and one of the author’s for Amnesty’s report Deadly Detention: Deaths in Custody Amid Popular Protest in Syria, spoke about the manner in which the research was done for the report. He stated:

I’ve not been into Syria. Amnesty International has not been allowed into the country during these events, although we have requested it. So the research for this report was done mostly from London, but also from some work in neighboring countries and through communications with a large network of contacts and relatives of the families, and, you know, other sources.[16] (emphasis added)

How can one write a report with any amount of authority if their only sources are through second-hand sources that may or may not have a bias or an agenda to push? How can you write a report using sources whose information has no way of being verified? It is reminiscent of the media war against Gaddafi, where it was reported in the mainstream media that he was bombing his own people and had given Viagra to his soldiers as so they could rape women, but absolutely none of this was verified.

While NGOs can have a positive influence on society at large, one must be aware of their backgrounds, who is in charge of them, and from whom they are getting funding from because the nature of the NGO is changing, it is being more and more integrated into the imperial apparatus of domination and exploitation. NGOs are fast becoming the missionaries of empire.