Why Can’t americans Have Democracy? 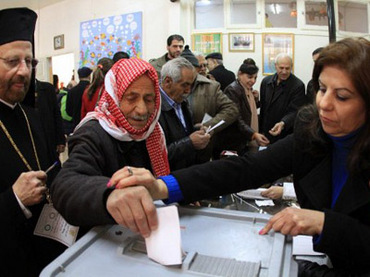 Syrians voted for a new constitution in a referendum on February 26, 2012 (AFP) 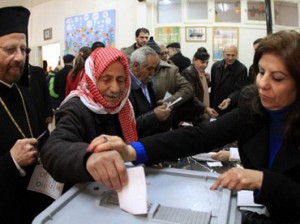 Syrians voted for a new constitution in a referendum on February 26, 2012 (AFP)

When the american invasion—a war crime under the Nuremberg standard set by the US after WW II—overthrew the Saddam Hussein secular government, the Iraqi Sunnis and Shi’ites went to war against one another. The civil war between Iraqis saved the american invasion. Nevertheless, enough Sunnis found time to fight the american occupiers of Iraq that the US was never able to occupy Baghdad, much less Iraq, no matter how violent and indiscriminate the US was in the application of force.

The consequence of the US invasion was not democracy and women’s rights in Iraq, much less the destruction of weapons of mass destruction (WMD), which did not exist, as the weapons inspectors had made perfectly clear beforehand.  The consequence was to transfer political power from Sunnis to Shi’ites. The Shi’ite version of Islam is the Iranian version. Thus, Washington’s invasion transferred power in Iraq from a secular government to Shi’ites allied with Iran.

Now Washington intends to repeat its folly in Syria. According to the american secretary of state, Hillary Clinton, Washington is even prepared to ally with al Qaeda in order to overthrow Assad’s government. Now that Washington itself has al Qaeda connections, will the government in Washington be arrested under the anti-terrorism laws?

Washington’s hostility toward Assad is hypocritical. On February 26, the Syrian government held a referendum on a new constitution for Syria that set term limits on future presidents and removed the political monopoly that the Ba’ath Party has enjoyed.

The Syrian voter turnout was 57.4%, matching the voter turnout for Obama in 2008. It was a higher voter turnout (despite the armed, western-supported rebellion in Syria) than in the nine US presidential elections from 1972 through 2004. The new Syrian constitution was approved by a vote of 89.4%.

But Washington denounced the democratic referendum and claims that the Syrian government must be overthrown in order to bring democracy to Syria.

Washington’s allies in the region, unelected oil monarchies such as Saudi Arabia and Qatar, have issued statements that they are willing to supply weapons to the Islamist rebels in order to bring democracy—something they do not tolerate at home—to Syria.

For Washington “democracy” is a weapon of mass destruction. When Washington brings “democracy” to a country, it means the country’s destruction, as in Libya and Iraq. It doesn’t mean democracy. Libya is in chaos, a human rights nightmare without an effective government.

Washington installed Nouri al-Maliki as president of Iraq. He lost an election, but remained in power. He has declared his vice president to be a terrorist and ordered his arrest and is using the state police to arrest Sunni politicians. Syria’s Assad is more democratic than Iraq’s Maliki.

Obama has even asserted the right, for which there is no law on the books, to murder any american, anywhere, if the executive branch decides, without presenting any evidence, that the person is a threat to the US government. Any american anywhere can be murdered on the basis of subjective opinion in the executive branch, which increasingly is the only branch of the US government. The other two “co-equal” branches have shriveled away under the “war on terror.”

Why is Washington so determined to bring democracy to the Middle East (with the exception of Saudi Arabia, Bahrain, Qatar, and the Emirates), Africa, Iran, Afghanistan, Russia, and China, but is hostile to constitutional rights in america?

The rights that americans gained from successful revolution against King George III in the 18th century have all been taken away by Bush/Obama in the 21st century.  One might think that this would be a news story, but it isn’t.

Don’t expect the Ministry of Truth to say anything about it.