Book Burning: The Americans still don’t get it 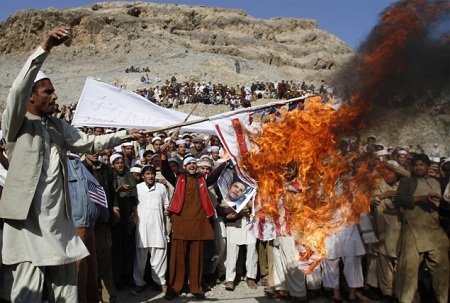 Are the Americans really that dumb? I mean, after spending 11 years in the world’s most dangerous battlefield and dealing with the fiercely proud and famously hot-blooded Afghans,  you have to be stark, raving mad to be doing what the Americans were found doing last week.  Why is it so hard for the West to see that faith plays a pivotal role in Muslim societies and lives of the believers? The renunciation of faith may be the first step towards liberation for the West with its best and brightest minds, from Christopher Hitchens to Richard Dawkins, competing with each other to run down their Maker.

But what the West finds to be ‘delusional’ is held in highest esteem by the Muslims.  This reverence extends to the Book that they believe to be the last word of God and the Last Prophet who brought it.  Interestingly, a belief in other Abrahamic faiths and their icons and scriptures is also part of this this belief system.  The faithful cannot imagine or tolerate the slightest of slurs or affront against these icons.   Anyone who has seen the Muslims handle the Book would know it.   They hold it with utmost reverence and do not even touch it unless they are in a state of purity. And when it comes to love and reverence for their faith and its icons, perhaps no one can outshine the Afghans.

When those spiteful caricatures surfaced in the scenic Scandinavia, they provoked spontaneous protests all around the world but the strongest of them were witnessed in Afghanistan. Many died in the angry demonstrations that went on for weeks.  History repeated itself when two years ago an attention-hungry pastor in the distant Florida vowed to make a bonfire of the Islamic scripture.

The Afghans are seldom known to allow a provocation go unchallenged.  Killing and getting killed for honor and what is close to heart is all in a day’s work— or Pakhtoonwali (the Afghan way) for the ordinary Afghans. Not for nothing this land enjoys the reputation of being the ‘graveyard of empires.’

After spending more than a decade and $500 billion dollars in Afghanistan, not to mention the thousands of lives lost on both sides, it is hard to believe the Yanks didn’t know this already.  So you have to be either totally stupid or utterly callous, or both, to incinerate the copies of the Book at the Bagram air base.

After days of protests and the unprecedented killing of many US troops including two senior US military personnel right inside the Interior Ministry by their Afghan allies, President Obama coughed up a terse apology: “I wish to express my deep regret for the reported incident. I extend to you and the Afghan people my sincere apologies.”

His commander in Afghanistan General John R. Allen, who has issued an equally sincere apology, has directed that all US forces undergo 10 days of “sensitivity training in the proper handling of religious materials.”

Eleven years into this war—isn’t it a bit late for that, General? Besides, it’s not as though the Americans and their comrades in Afghanistan are exactly ignorant of Afghan and Muslim sensitivities.  We have been here before, repeatedly, with similarly sensitive American shenanigans being followed by equally perfunctory apologies.

In 2005, Afghanistan was rocked by violent protests when there were reports of the Guantanamo Bay interrogators defiling the Koran as part of their methods of persuasion. Last year the Afghans were outraged by the revelations about the US ‘kill teams’ that hunted civilians for fun, duly capturing their Kodak moment for posterity standing over their ‘trophies’.

Why only recently when the Americans and Taliban representatives were sitting down for talks in Doha, there were these startling images of the four wisecracking US Marines urinating over dead Afghans.  Other members of the ‘coalition of the willing’ haven’t been far behind. The cousins across the Atlantic, for instance, were found filming themselves abusing Afghan children.

This war for Afghan hearts and minds has gone alongside the bombing of Afghan homes and villages and even wedding and funeral processions.  Thousands of innocent civilians, according to UN agencies and independent rights groups, have perished in these attacks.  The recent killing of eight shepherd boys, aged between eight and six, in a NATO air strike in Kapisa province is but just one example.

Do we see a pattern here—a deliberate method in the madness? Does the upsurge in such ‘incidents’ have anything to do with the timing of the US-Taliban engagement following the efforts of some Arab and Muslim countries? Anything is possible. There are many out there, including those in the US military establishment, with strong motives to derail all efforts to end this disastrous war.

Given the high stakes involved in the so-called Great Game and Washington’s keenness to maintain its presence in this strategically critical region, not to mention the yet-to-be-tapped rich mineral resources that Afghanistan has hidden in its belly, possibilities are endless.

This week, conservative pundit Patrick Buchanan was livid over Obama’s Koran apology. In an angry opinion piece, he points to the fact that the US has squandered hundreds of billions of dollars and thousands of American lives in Afghanistan, raising the inevitable question: For What, These Wars? For what, indeed? Well, here’s why.

Afghanistan provides Uncle Sam with a rare vantage point to keep a resurgent Russia and a clever China on the one hand and an irrepressible Iran and pesky Pakistan, on the other, in check.  The US already has an overwhelming presence in the Gulf, the energy bowl of the world. 9/11 was merely an excuse and a rather convenient opportunity.

But then the Americans are not the first to enter Afghanistan with such ambitions and, some would say, delusions of grandeur.  The British and more recently the Russians have been there before them, not to mention numerous others, from the Greeks to the Mongols.  While the crafty British had to give up after several disastrous and humiliating attempts, the Afghan occupation cost the Russians the Soviet empire.

Do the Americans, after a disastrous decade in Afghanistan, really think they can succeed where all others failed? It had always been a doubtless enterprise. But with the sweetness and light that the coalition of the willing has been forever spreading around, it is doomed.  That Uncle Sam will have to leave sooner or later is not a matter of debate.  It’s a certainty. What remains to be seen is how the Americans go—the way the British left with egg in their face, or in the manner the Russians departed, bruised and battered with their empire crumbling around them.