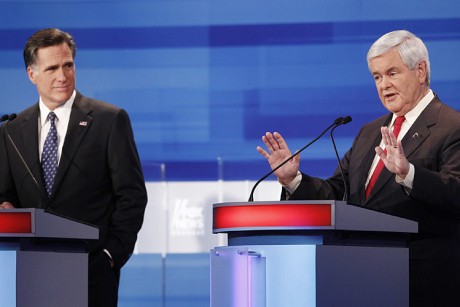 Shatila Camp, BEIRUT — We all know it is not just American and Lebanese politicians who use Palestinian refugees as political footballs during electoral campaigns; but they are currently the two most egregious apart from most Zionist politicians in temporarily occupied Palestine.

In the US, it would not be a difficult task to find even more revolting and groveling intellectual “half-men”, to borrow a phrase from Syria’s beleaguered President Bashar Assad, than Mitt Romney and Newt Gingrich during their recent “debate” in Jacksonville Florida. 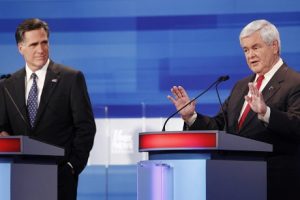 While a high percentage of Republican Jewish voters will go to the polls in this winner take all primary, Mitt and Newt are also pondering their national fundraising networks as they gratuitously misrepresented history and betrayed their claimed religious and moral beliefs.

Romney repeated his screed that President Obama “threw Israel under the bus” by following international law, seven UN Security Council Resolutions and world opinion by designating the pre-1967 borders as the starting point for peace talks. He also complained that America’s President “disrespected” Israel’s Prime Minister Netanyahu when Obama spoke recently at the UN and mentioned in passing illegal Israeli settlement building but did not discuss retaliatory rockets being fired from Gaza into occupied Palestinian territory.

Genuflecting just as obsequiously to the Zionist lobby, Gingrich insisted to Florida voters once again that “Palestinians are an invented people who historically were considered Jordanians and Syrians.”  No one in the audience was so impolite as to remind the claimed student of history that Jordan did not even exist until created by the pro-Zionist British occupiers of Palestine, well into the 20th Century, while Palestinians have lived in Palestine for more than 3,000 years. While more than 95% of Zionist colonists have zero historical links to Palestine and their genealogical roots are in Europe, Russia, and elsewhere, despite the fact that millions have invaded Palestine seeking free land and US government funded cash and housing handouts.  Morally and legally, these colonists have no right to even one grain of sand in Palestine.

Newt again promised his audience that on his first day as President, he will for sure issue an Executive Order moving the US embassy from Tel Aviv to Jerusalem, another violation of International law.

Florida’s nearly 640,000 Jews are just 3.4 percent of Florida’s population. But because they vote in extraordinarily high numbers, they are 6 to 8 percent of Florida’s general election turnout; but not, of course, when it comes to Republican primaries.  Yet one recent poll estimates that 52% of the state’s registered Jewish voters would support a Republican presidential ticket, such is their mistrust of Obama and what he might do in a second term with respect to occupied Palestine.

As with his rival Mitt, President Newt’s first foreign trip will be to Israel.  With these latter two pledges Newt joins 19 Presidential primary aspirants who since 1967 have made similar promises. Fortunately, for what is left of American Humanitarian values, not one has been elected President.

Lebanese style anti-Palestinian political speech is more sophisticated and subtle, like the Lebanese people themselves,  and nearly always devolves to the gut wrenching warning, delivered with a straight face,  that if we allow Palestinian refugees the right to work or to own a home (as required by International Law and currently enjoyed by refugees in 192 other countries) it might encourage them to get lazy and become too comfortable in Lebanon and they might, God save us all, seek naturalization.  And this could interfere with the Palestinian refugees internationally guaranteed Right to Return to their homes in occupied Palestine which Lebanese strongly support for their brotherly and sisterly guests.

Lebanese politicians, including every party and religious grouping bar none, except the Druze and the National Syrian Socialist Party, use voter’s fear of naturalization (in America think immigration) to undercut growing human rights pressure for Lebanon to give Palestinians elementary human rights.

A rare exception for a Lebanese politician shocked many here when earlier this month, to his eternal credit and honor, Social Affairs Minister Wael Abu Faour became the first Lebanese Cabinet member to make an official visit to a Palestinian refugee camp in six years when he toured south Beirut’s Burj al-Barajneh camp before signing a memorandum of understanding with the United Nations Relief and Works Agency (UNWRA). The agreement will enable UNRWA for the first time to work in coordination with the Social Affairs Ministry to provide some services to some of the most vulnerable people in the camps.

The lack of employment opportunities for Palestine refugees prolongs and intensifies their hardship and poverty.  In the five Southern Lebanon camps, according to a recent Swiss Agency for Development and Cooperation (SDC) and UN International Labor Organization study, more than 81 per cent of all refugees are living in abject poverty. Young people are particularly affected, with unemployment for Palestinians between 15 and 24 reaching 60%. The employments figures are not much better in the northern camps.

Speaking at the event, Minister Faour, a Druze and member of Walid Jumblatt’s  Progressive Socialist Party,  called on his fellow politicians to follow his lead and experience firsthand conditions in Lebanon’s 12 Refugee camps.  “Whoever wants to rediscover his humanity has to see the living conditions in Palestinian camps in Lebanon” Minister Faour told Lebanon’s Parliament.  “We are used to bringing Palestinians to discussions in fancy hotels and then sending them back to the misery in the camps. We decided to invert these traditions by coming to the camps.”

Unfortunately Minister Abu Faour undercut some of the positive contribution of his visit by emphasizing to the media “the difficult relationship between Lebanon and the Palestinian population. The Lebanese government has consistently declined to grant rights to Palestinian refugees for fear that it would pave the way to naturalization, which it argues would diminish their right to return to Palestine.”

It would be difficult to find one Palestinian in Lebanon, or any advocate of human rights here, who truly believes the Lebanese politicians claimed notion of concern for the sanctity of the Palestinians Right of Return justifies keeping a quarter million human being in the most degrading squalor while outlawing even the right to work or to own a home out of an altruistic concern to keep hallow some of the refugees other international rights.  Palestinian refugees in Lebanon reject more than any of the politicians here any form of settlement, naturalization, implantation or tawtin.  They have a county just across the southern Lebanese border and their goal, now in its 64th year, is to return without more delay.

Many Palestinians in Lebanon’s camp mention a new energy among their fellow refugees as a result of the continuing, broadening and deepening Arab and Islamic Awakening which erupted one year ago in Tunisia and whose spread continues.

The swelling bud of intifada is also being observed by foreigners here and as Palestinian camp residents invite Pope Benedict to visit their camps in the Spring during his reported visit to Lebanon; one idea from kids at Ramallah school in Shatila Camp is for the Vicar of Christ to hold a Mass for tens of thousands in the new Cite Sportiff, on the edge this Camp.  For it was at this sports center 30 years ago  that part two of the Massacre at Sabra-Shatilla was organized by Israeli and Phalange troops on September 18th and  for which, like the other 43 hours of uninterrupted  slaughter, no one person has ever been held accountable.

It would be an enormously powerful historic event should Pope Benedict fill Cite Sportiff with people of good will, and there are many such people here, like Minister Faour, from all the confessions and political parties, joined by all religious and civil society leaders in Lebanon, and with the Pope’s blessing and admonition for all of us to follow in the path of Mohammad and Jesus and their deciples, that Palestinian refugees in Lebanon might be granted even the most elementary human rights.