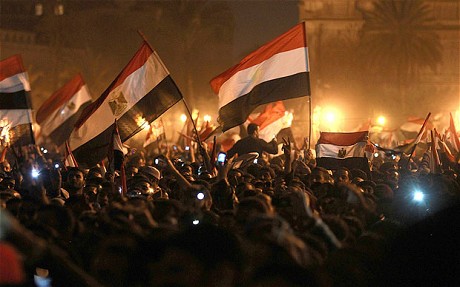 Almost three years ago, Richard Perle, also known as “Prince of Darkness,” brazenly attempted to deny his own existence as a leading pro-Israel architect of the Iraq war, when he stated, “There is no such thing as a neoconservative foreign policy.” Now, the “nonviolent” manifestation of that regime change agenda appears to be following suit.

On January 4, Bloomberg Markets magazine noted Peter Ackerman’s efforts to apply his longstanding “passion for grass-roots democracy” around the world to the American political scene in a surprisingly critical report entitled “Internet Picks Presidential Candidate If Ackerman Gets His Way.” In the article, Kambiz Foroohar explains:

Ackerman, 65, who made more than $300 million working alongside Michael Milken at Drexel Burnham Lambert Inc.’s Beverly Hills, California, offices in the 1980s, is Americans Elect’s chairman and top donor. He wants to circumvent U.S. politics-as-usual by letting voters choose a presidential candidate via the Internet who, with a running mate from a different political party, will appear on every state ballot for the 2012 election….

Foroohar goes on to highlight what appears to be the multi-millionaire businessman’s primary enterprise:

Clearly displeased with the negative publicity, Ackerman’s external “democracy promotion” vehicle issued a number of “Corrections” to the Bloomberg report in its “Setting the Record Straight” section:

This article creates the false impression that the International Center on Nonviolent Conflict (ICNC) may be “training dissidents to overthrow dictatorships,” in the words of a businessman it quotes who has had no contact with the Center. In fact, ICNC does not now “train dissidents” and has not supported workshops abroad for nonviolent activists since 2009.

The article also claims that ICNC’s founding chair, Peter Ackerman, “has funded workshops for dissidents from Central Asia, Iran, Iraq and North Korea,” and leaves the impression that ICNC may have supported “civil resistance training” for “members of Egypt’s April 6 movement” through the Center for Applied Nonviolent Action and Strategies (CANVAS) in Belgrade. None of this is accurate.

When Egypt’s April 6 Youth Movement was struggling to recover from a failed effort in 2005, its leaders tossed around “crazy ideas” about bringing down the government, said Ahmed Maher, a leading strategist. They stumbled on Mr. Sharp while examining the Serbian movement Otpor, which he had influenced.

When the nonpartisan International Center on Nonviolent Conflict, which trains democracy activists, slipped into Cairo several years ago to conduct a workshop, among the papers it distributed was Mr. Sharp’s “198 Methods of Nonviolent Action,” a list of tactics that range from hunger strikes to “protest disrobing” to “disclosing identities of secret agents.”

Dalia Ziada, an Egyptian blogger and activist who attended the workshop and later organized similar sessions on her own, said trainees were active in both the Tunisia and Egypt revolts. She said that some activists translated excerpts of Mr. Sharp’s work into Arabic, and that his message of “attacking weaknesses of dictators” stuck with them.

Peter Ackerman, a onetime student of Mr. Sharp who founded the nonviolence center and ran the Cairo workshop, cites his former mentor as proof that “ideas have power.”

Continuing its attempt to set the record straight, the ICNC explains what it does:

We furnish a wide range of educational materials and information to educators, journalists, international institutions, civil society groups, and people involved in campaigns or movements for rights and justice, who request that information. It does this work primarily through seminars at universities, presentations and briefings, graduate and undergraduate curricula, online learning platforms, and webinars, as well as direct and indirect dissemination of books, reports, articles, audio files, films, videos and a video game, “People Power: The Game of Civil Resistance.”

Presumably, disseminating “People Power: The Game of Civil Resistance” has absolutely nothing to do with “training dissidents to overthrow dictatorships.”

Yet in an April 2005 profile of Peter Ackerman in The New Republic, aptly entitled “Regime Change, Inc.,” a leader of Georgia’s “Rose Revolution” testifies to the efficacy of “Bringing Down a Dictator,” a documentary film (also available in Arabic) that “originated” with Ackerman:

“Most important was the film. All the demonstrators knew the tactics of the revolution in Belgrade by heart because they showed [the film]…. Everyone knew what to do.”

That Ackerman is a part of the U.S. foreign policy elite and integral to the new modalities of intervention under the rubric of “democracy promotion,” etc., is beyond question. There is nothing controversial about that and anyone who believes otherwise is clearly seriously misinformed or just ignorant.

We eagerly await the International Center on Nonviolent Conflict’s “correction” of this piece. It wouldn’t be the first time that Ackerman’s “independent, non-profit educational foundation” took issue with something this writer has written about the ICNC’s “educational” work. Hopefully, they won’t again resort to smearing my work (based on a calculated misrepresentation of one tangentially related article) in a transparent attempt to deflect attention from a critique of their own.