Will a pro-Gadhafi ‘Green Revolution’ topple the NTC? 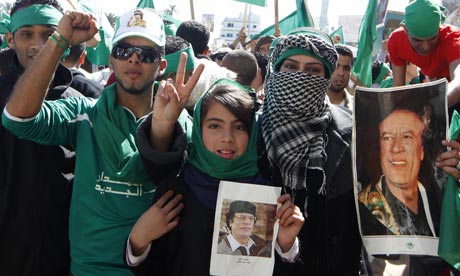 TRIPOLI — This observer was stunned late last week when during a meeting in a Maghreb country with three high ranking former Libyan officials, among hundreds currently in hiding, and some organizing, in countries bordering Libya, one of them, in all earnest,  asked me, “Do you believe there will be a counter revolution  soon in the Jamarariya (state of the masses)?”

The reason I was so surprised is that I was about to ask my hosts that very question.  I was thinking that with all their security and serious-faced male visitors, some western, coming and going and whispering that the reported Libyan Liberation Front groups along the Seral might be making some progress, after not hearing much about them recently.

Of course this observer has little idea if the much talked ‘Green Revolution’ is strong or could topple the current NATO created and imposed government.

Certainly there are heard today many complaints in Libya about the do-nothing “non-government” that increasingly people in all walks of life are boldly complaining about.  What I have observed personally is that nearly all the reports on events in Libya on certain Internet sites are false.   Frankly this was also the case during the summer months here in Libya when patently false claims about NATO using MAP 108 Spanish manufactured cluster bombs against civilian or loyalist military targets,  NATO using depleted uranium, or that 150,000 Libyan civilians were killed were posted as truth “from reliable sources inside Libya.”  Or additional wild claims, for example, that Misrata and other areas were always in loyalist control and that the rebels were surrendering en masse and that NATO was admitting defeat the next day.

A couple of recent false claims include:

All of us know that misinformation and disinformation are common during armed conflicts, often politically motivated. But such grossly exaggerated and unsubstantiated claims and conspiracy theories only aid the aggressors—in this case, NATO.

There is clear and growing pro-Gadhafi political and military activity here, and this is why NTC leader Mustapha Abdul Jalil the other day warned against the Gadhafi children raising an insurrection.  Aisha Gadhafi, given Saif’s current incarceration, is perhaps the likely leader, given her intelligence, energy, and strong commitment to replace “NATO’s rebels”, vindicate her father, preserve his  correct legacy, and organize a reform movement along the lines that she and some family members and loyalists were working—with the approval, she claims, of her father before his death.

Every night more pro-Gadhafi graffiti appears on street walls, buildings and around Green (Martyrs) Square.  Activists, and there appear to be more every day, assert that so far the NTC has not attacked them and they feel fairly free to speak  out and even organize.  It is anyone’s guess how long this situation will exist before a violent crackdown and open fighting.

It is difficult to gage the anti-NTC/ pro-Gadhafi mix and the extent to which each is propelling increasingly unpredictable events in Libya.

Yet, with the elimination of Muammar Gadhafi, which was NATO’s clear intention from March 19 when it took over the U.N. Security Council Resolution 1973 campaign against Libya, NATO correctly concluded that without Gadhafi’s charismatic leadership in Libya and in the region, any “Green counter-revolution” would be very difficult. That is what we are seeing today.

While the restive Libyan population appears to be rebelling against the NTC for a variety of reasons, today, the urinating by NATO forces on the bodies of Afghanis is dominating the news and discussions in this pious Muslim country.  NATO has already lost much of its claimed public relations boost following its Halloween night ending of the bombing.  One suspects that this is because of an accumulation of many more recently discovered cases of NATO bombing of civilians in Libya and, additionally, the reports of innocent non-threatening soldiers as in Pakistan, Iraq, and Afghanistan. The population today in Libya is increasingly furious because more and more cases are coming to light concerning the high numbers of children who have been killed by NATO.

In addition to the fury caused by the urinating NATO forces, NATO officials are being ridiculed for all their denials that their bombing missions here in Libya, numbering more than 11,000, caused civilian deaths and their claims that NATO forces conducted themselves according to the higher moral and military standards, and sometimes put themselves at risk to avoid civilian casualties. The claims remind some of a generation of similar ludicrous public relations campaigns undertaken regularly by the Israeli government.

The signs from Libya are that this country remains volatile and that, contrary to NATO claims that it put into place a “new democratic Libya”, the predictable next chapter is starting to unfold, which may bring the end of the NTC before the coming June elections, when it is scheduled to be replaced.