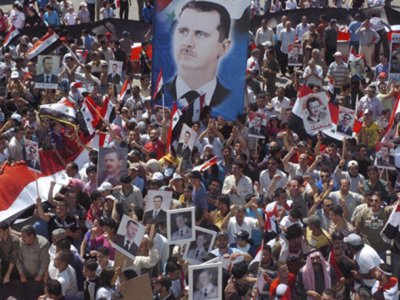 Change We Can Believe In?

While there had been a few exceptions to Antiwar’s biased coverage of Syria throughout 2011, most notably from Justin Raimondo, Philip Giraldi, Eric Margolis, and Pepe Escobar, the prevailing impression one got from reading it was a simplistic narrative of peaceful protestors being killed by a tyrannical regime. However, in his January 2, 2012 column, Justin Raimondo wrote:

The last bastion of Ba’athist secular rule in the region has been rocked by anti-government riots, with groups of well-armed men taking on the Syrian military and hundreds killed and wounded in violent street demonstrations. What’s interesting is that we hear much about the latter in the Western media, while the former is downplayed or not reported at all.

As the intensity of the anti-Syrian propaganda war picks up in the “mainstream” media – which focuses on alleged atrocities committed by government forces while maintaining a soft focus on the violence of armed rebel groups – the news that the Obama administration is making plans to intervene comes as no surprise. Indeed, the Americans are already intervening behind the scenes: the question is, will they come out in the open and call for “regime change”?

Considering that Jason Ditz’s reporting on Syria has been marked by the exact same bias, Raimondo’s criticism of the mainstream media seems disingenuous to say the least. Ironically, Raimondo’s link to “alleged atrocities” takes the reader to VOA News, one of his colleague’s most trusted sources, regularly cited as evidence of Assad’s alleged violent crackdown on peaceful demonstrators.

In a recent op-ed piece not published on Antiwar.com, Professor James Petras warns against the “anti-imperialism of the fools”:

The long history of imperialist manipulation of “anti-imperialist” narratives has found virulent expression in the present day. The New Cold War launched by Obama against China and Russia, the hot war brewing in the Gulf over Iran’s alleged military threat, the interventionist threat against Venezuela’s “drug-networks”, and Syria’s “bloodbath” are part and parcel of the use and abuse of “anti-imperialism” to prop up a declining empire. Hopefully, the progressive and leftist writers and scribes will learn from the ideological pitfalls of the past and resist the temptation to access the mass media by providing a ‘progressive cover’ to imperial dubbed “rebels”. It is time to distinguish between genuine anti-imperialism and pro-democracy movements and those promoted by Washington, NATO and the mass media. (emphasis added)

If Antiwar.com wants its claim to be “the central locus of opposition to a new imperialism that masks its ambitions in the rhetoric of ‘human rights,’ ‘humanitarianism,’ ‘freedom from terror,’ and ‘global democracy’” to be taken seriously, they will need to heed that warning.

However, if it is to regain the trust of its readers, Antiwar.com will also need to address the serious concerns raised in this report. An important first step would be to undertake an internal review of its reporting of last year’s tumultuous events in the Middle East and North Africa. For it to be worthwhile, it should provide its many disillusioned readers with satisfactory answers to the following questions: