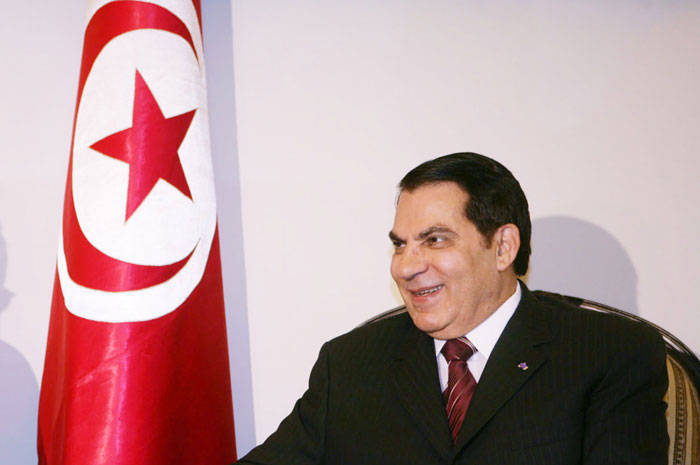 “Spontaneous” demonstrations of thousands of youths pouring out into the streets with such force as to compel the flight of a long-time president… To which country are we alluding: Georgia, Serbia, Myanmar,[1] Ukraine, Poland, Czechoslovakia, Iran, Hungary…? This time it is Tunisia. All of these “revolts” followed the same pattern. Already the Tunisian revolt is being called a “color revolution” by media and political pundits, and it has also been provided with a name; the “Jasmine Revolution,”[2] like the abortive “Green” and “Saffron” Revolutions, and the successful Velvet, Rose, Orange, and Tulip Revolutions, etc.

These “color revolutions” all have a common pattern because they are all planned by the same strategists; namely the Open Society network of money speculator George Soros, who serves as a kind of modern-day Jacob Schiff in funding revolutions;[3] and the National Endowment for Democracy, the latter a post-Trotskyite founded, Congressionally-funded kind of “Comintern” promoting the “world democratic revolution” in the service of plutocracy and under the façade of liberty.

Here is a typical scenario of “color revolutions.” Check it off against the features of the “Jasmine Revolution,” and of the funding by the National Endowment for Democracy to “Tunisian activists,” as described further on:

[Soros’ Open Society Institute]… sent a 31-year-old Tbilisi activist named Giga Bokeria to Serbia to meet with members of the Otpor (Resistance) movement and learn how they used street demonstrations to topple dictator Slobodan Milosevic. Then, in the summer, Mr. Soros’s foundation paid for a return trip to Georgia by Otpor activists, who ran three-day courses teaching more than 1,000 students how to stage a peaceful revolution.[4]

Commenting on the “Velvet Revolution” that had just passed over Georgia, MacKinnon described the operations that went into play, following the same patterns as they had in other Soros targeted states[5]:

The Liberty Institute that Mr. Bokeria helped found was instrumental in organizing the street protests that eventually forced Mr. Shevardnadze to sign his resignation papers. Mr. Bokeria says it was in Belgrade that he learned the value of seizing and holding the moral high ground, and how to make use of public pressure — tactics that proved so persuasive on the streets of Tbilisi after this month’s tainted parliamentary election.

In Tbilisi, the Otpor link is seen as just one of several instances in which Mr. Soros gave the anti-Shevardnadze movement a considerable nudge: He also funded a popular opposition television station that was crucial in mobilizing support for this week’s “velvet revolution,” and he reportedly gave financial support to a youth group that led the street protests.[6]

NED and Soros work in tandem, targeting the same regimes and using the same methods. NED President Carl Gershman, in writing of the hundreds of Non-Governmental Organizations working for “regime change” throughout the world, pays particular tribute to the Ford Foundation and “the foundations established by the philanthropist George Soros.”[7]

As the common adage goes, if you want to know who’s running things, follow the money trail. Looking at the recipients for NED grants we find the following, for 2009 (the latest available):

The purpose of this is clear enough; to create a cadre of youth activists, including ‘leadership training workshops.” Again, it is exactly the same course as the strategy used by NED and Soros in other states afflicted with “color revolutions”. Exactly the same.

Association for the Promotion of Education (APES) $27,000

To strengthen the capacity of Tunisian high school teachers to promote democratic and civic values in their classrooms. APES will conduct a training-of-trainers workshop for 10 university professors and school inspectors, and hold three two-day capacity building seminars for 120 high school teachers on pedagogical approaches rooted in democratic and civic values. Through this project, APES seeks to incorporate the values of tolerance, relativism and pluralism in Tunisia’s secondary educational system.[9]

The program seems to be for the purposes of spreading a doctrinal base for revolution; the “democratic and civic values” must be presumed to be of the post-New Left variety fostered by NED and Soros, based on values that generally run counter to the traditions of the societies where Sorsos and NED operate.

The terminology here is not even hidden with euphemisms: “To train a core group of Tunisian youth activists…” Might one not be justified in suspecting that the intention is to create a revolutionary youth cadre for the purposes of “regime change”, following exactly the same blueprint that has orchestrated “color revolutions” in the former Soviet bloc and elsewhere?

Given the keen interest NED has shown in Tunisia, it would seem naïve to think that the “Jasmine Revolution” is simply a “spontaneous manifestation of popular anger” and that it has not been planned well in advance, awaiting the right moment for a catalyst.