The U.S. and Iraq After the War 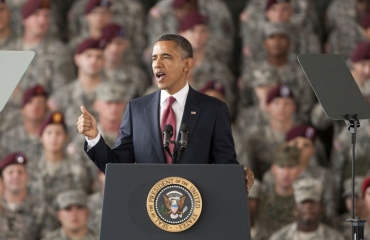 Obama’s interpretation of the war

President Obama bid farewell to the Iraq war after nearly nine years of conflict in a Nov. 14 speech to troops of the 82nd Airborne at Ft. Bragg, N.C. He virtually damned the war with the faintest of praise. 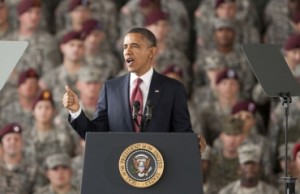 The problem was that he couldn’t claim victory and had to conceal an historic defeat — but at least it wasn’t his war, as Afghanistan has become.

Meanwhile in Iraq, a perhaps inevitable major political crisis is brewing between the Shi’ite-led government and Sunni ministers in the regime.

The war was a fiasco for the Pentagon and a roadside bomb for America’s international reputation. Obama thus resorted to conveying a deceptively selective history of former President George W. Bush’s Iraq misadventure. Deploying the language of omission, ultra-patriotism, and gushing praise for the troops, Obama managed to smother the truth about the war’s origins, conduct and ending.

Most Americans have long tired of the Iraq occupation, not least because the war hadn’t touched most people. It was a credit card war that will burden future generations with debt, not them, and the troops were volunteers, not conscripts. People often waved the flag with gusto and participated in pro-forma displays of support for the troops and concern for their families, but not much more. Reporting about the official war-ending, flag-lowering ceremony in Washington Dec. 15, Jim Lobe of Inter Press Service noted that “hardly anyone here seemed to notice, let alone mark the occasion in a special manner.”

A majority of Americans opposed the bipartisan war — almost 70% today — and they have done so for years, although a much smaller number took to the streets where it counts. Many millions protested the war even before it began. Some 500,000 went to Washington in the cold of January 2003 to demonstrate against going to war two months before Washington’s “shock and awe” bombardment of Baghdad. The mass antiwar movement remained large and viable for several years, but dissipated, except for the dedicated left and pacifists, when Democrat Obama won the 2008 election. The movement had a much larger impact on public opinion and government policy than has been recognized.

In his speech Obama made no mention of such highlights as the nonexistent weapons of mass destruction, the shame of Abu Ghraib, or the astonishing cost of the war. He couldn’t even point to any concrete military accomplishments. The vaunted 2007-8 “surge” concocted by Gen. David Petraeus was not evoked, perhaps because its main element consisted of paying the insurgents $30 million a month to stop fighting, which doesn’t say much about the Pentagon’s prowess. At that time some 170,000 U.S. troops maintained over 500 bases in Iraq against up to 20,000 decentralized irregular guerrillas without any of the accoutrements of modern warfare.

Instead of facts the president resorted to embellishing trifles and vacuous tributes to the troops: “The most important lesson that we can take from you is not about military strategy — it’s a lesson about our national character.” “As your commander-in-chief I can tell you that [the war] will indeed be a part of history.” “Now, we knew this day would come. We’ve known it for some time. But still, there is something profound about the end of a war that has lasted so long.”

Obama characterized the withdrawal as a “moment of success.” To the uninformed, this may imply some kind of victory, but it simply means the troops were withdrawn without incident.

At the beginning, the Bush Administrated estimated the war would end in victory in three months. Bush claimed victory on May 1, 2003, with his infamous “Mission Accomplished” speech from an aircraft carrier. It groaned to an ambiguous finale in 105 months. The combined length of America’s participation in World Wars I and II was 64 months.

The best Obama could say about one of Washington’s longest wars was that “American troops… will cross the border out of Iraq with their heads held high.” He couldn’t call it a victory, but “heads held high” is supposed to rule out the perception of defeat.

But defeat is the only suitable word. Any war between a rich, overwhelmingly powerful state deploying a military juggernaut and a small poor state with a broken army that ends in a stalemate after nearly nine years is a humiliating defeat. It is being covered up, but in time we assume historians will unite around this verdict.

The White House and Pentagon fear that public awareness of a defeat in either Iraq or Afghanistan may generate another “Vietnam Syndrome.” After that ultimately unpopular and vigorously protested war ended in triumph for the National Liberation Front of South Vietnam and D.R. Vietnam in 1975 — the American people were obviously disinclined to countenance another major war of choice in a foreign venue, especially against a developing country in Asia that doesn’t directly threaten the U.S.

This didn’t prevent the right-wing Reagan Administration from invading and walking over two tiny, weak countries (Grenada and Panama) and from supporting counter-insurgency campaigns in Nicaragua, El Salvador, Guatemala, South Yemen, and elsewhere, but it took 16 post-Vietnam years (1976-1991) before the Pentagon was politically able to openly engage in a major war involving hundreds of thousands of troops (Iraq War I, otherwise known as the Gulf War).

Washington has been engaged in hot, cold or surreptitious wars for 70 years, presently spending $1.4 trillion a year on its military and national security budgets, and has provided no evidence it will stop. As such it is essential to maintain the public belief that the U.S. military is the best in the world (a frequent Obama mantra), and that Vietnam was an inexplicable fluke or largely the fault of civilian leadership.

Obama sought to compensate for being unable to claim victory by referring to the “extraordinary achievement” of the American troops, saying, “today we remember everything that you did to make it possible.” The “it” was not defined. Indeed, “Because of you, because you sacrificed so much for a people that you had never met, Iraqis have a chance to forge their own destiny.” He went on to call the U.S. military “the most respected institution in our land.”

Presidential praise of the Ft. Bragg troops for “serving with honor [and] patriotism” deserves some comment.

There are those who maintain that it is as impossible to serve “with honor” in a dishonorable preemptive war — an unjust, illegal, and immoral war of choice for geopolitical advantage and access to oil — as in any grossly dishonorable enterprise, civilian or military.

They ask: Can one participate with honor — even with bravery or at least showing up and following the leader — in a civilian gang attack on innocent people, or for burning down a block of urban housing, or for acts of vandalism in a rural village? Is doing so any different in a criminal war while waving the national colors to advance the interests of what is today termed “the 1%”?

How do conventional criminal deeds differ from the massive criminality of U.S. imperialism in invading a country half-way around the world that was no danger to America or any other country, destroying its civil infrastructure, killing between 600,000 and a million Iraqis and causing three to four million people to become refugees? (Some estimates of Iraqi dead are 100,000 “or more.” The higher figures, maintained over the years not just from newspaper accounts, derive from the British medical journal The Lancet and other independent sources.)

And what is “patriotic” about taking part in crushing a much smaller and virtually defenseless country already suffering from an earlier war and a dozen years of killer sanctions that were responsible for the deaths of yet another million Iraqis, half of them children, according to the UN?

Government hyper-patriotic propaganda probably did convince many of the military volunteers that Iraq possessed weapons of mass destruction that threatened America and that the Iraqi government played a role in 9/11, but these lies were exposed at least seven years ago. The soldiers, including the large number of men and women who joined primarily to obtain employment, or earn money for college, or escape poverty, or to avoid a dead-end future are daily subject to the Pentagon’s rah-rah version of its rationale for the war.

The U.S. military did have its members who served with honor and patriotism. Alleged WikiLeaks whistleblower PFC Bradley Manning is an outstanding example. He is essentially on trial for exposing war crimes. Others include those who joined Iraq Veterans Against the War (IVAW) or March Forward, another veteran group, who turned against and condemned the conflict and devoted themselves to working for peace. Also, we assume there were many soldiers who consciously avoided harming civilians and performed acts of kindness as well.

But an undetermined number of U.S. soldiers were involved in reprehensible treatment of civilians in Iraq, or openly displayed contempt for Iraqi customs and beliefs — often with the approval of their officers. The public testimony of IVAW members a couple of years ago was chilling, as well as the many revelations of murder and abuse that have managed to become known to the media, such as the Haditha massacre of dozens of Iraqis in 2005. As U.S. troops were leaving Iraq this month, secret military testimony about the Haditha tragedy was discovered among papers in a junkyard where they were supposed to have been burned.