Non-Violence Does Not Have to Be Passive 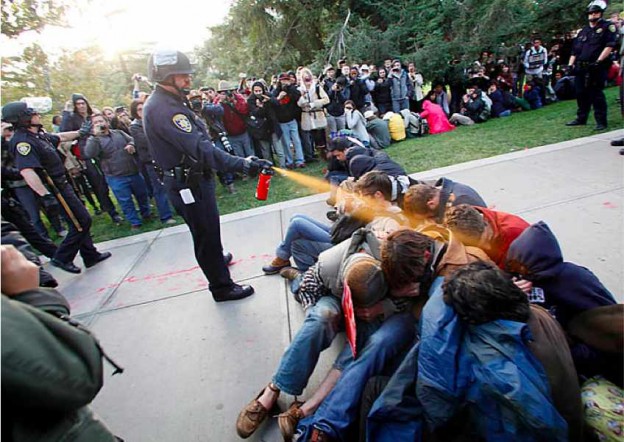 I have just watched the video of the University of California students at Davis against the heavily armed police that is becoming prominent on many internet sites, and I am reminded, among other things, of the non-violent responses of the Palestinians to their occupiers (see Refusing to be Enemies: Palestinian and Israeli Nonviolent Resistance to the Israeli Occupation, Ithaca Press, 2011). The video shows clearly the actions of the police pepper spraying passive students sitting on the ground, heads down. Following that, without any real organization of leadership, the students start slowly almost imperceptibly at first, moving forward toward the police. The resolution is that the police finally turn and leave the site. An earlier video, showing U.S. Marine Corps Sgt. Shamar Thomas shaming a squad of New York City police, serves as another excellent example of non-violence actively confronting threatened or implied violence.

The highlight of this is that non-violence need not be passive.

Non-violence can be passive, and does at times necessitate full passivity in the face of impending violence. But in other circumstances, especially where the overwhelming balance of force is on one side, a pro-active non-violence can be very effective. The police/military are then forced into a decision: to either use violence against the protesters; or to stand down from the protesters.

Included in this is the nature of social media and the ubiquitous presence of cameras, videos, cell phones, and their immediate input into the airwaves of the world. If the police are to choose violence, it will be seen globally, even if the mainstream corporate media do not pick up on it. If the police choose to stand down, that also will not be seen in corporate media. But everyone else will see it nevertheless.

Historically, pacifism did not bring about significant changes to the social structures and politics of the world. The Magna Carta (1215) in England was not donated willingly by the King but forced upon him by his rebellious barons. Interestingly enough, this was not a rebellion to replace one monarch with another, but to limit the powers of the absolute monarchy. The unions that workers attempted to form were not aided and abetted by the corporations that were involved. Union development in the western world is the story of workers’ rights and better working conditions up against the forces used by the corporate elites, the militaries and hired police. Many workers’ strikes were settled by violence before unions began to have some recognition under law. Unfortunately, many of them were later co-opted by the union bosses to support one political position or another of the elites.

The women’s suffragette movement was not a peaceful one, and involved violence against the women, with the women resorting to hunger strikes and chaining themselves to barricades in order to pronounce their determination. World War I had a significant role in giving women the right to vote as they ‘demonstrated’ their abilities to replace men in the homeland manufacturing centers. The freeing of the black slaves in the U.S. and then the long struggle to have equality in society was not given to the black people voluntarily. It involved a long history of violence against blacks and their supporters. This violence continues today with the inequalities of race and crime based on this historical pattern.

Gandhi spoke of non-violence, but was not passive in his opposition to the British empire in India. Martin Luther King spoke of non-violence but was not passive in his actions against racial discrimination in the U.S. The Egyptians demonstrated non-violence in Tahrir Square and are still under fire from the military regime now controlling Egypt (and why not, for all the billions of dollars they receive from the U.S.?) The Palestinians practice non-violence on a daily basis, protesting against the illegal wall that is expropriating their territory, and in a large part by simply existing and being, proceeding with life trying to give it some sort of semblance of civility under occupation. Protesters in Bahrain and Yemen who have been non-violent have had overwhelming force used against them—as did the Indians, the blacks, the Egyptians, and all others who have protested non-violently.

So there is an obvious downside to protests and struggles for human rights, but that is part of what non-violence is about—a clear demonstration that the powers that be are not democratic and are in reality against the masses of the people (except as consumers and cannon fodder of course). The elites are not aligned with the people, are not accepting their own rhetorical standards of free speech and democracy, and with other elites will do their best to control the voice of the people. It is an alignment of the contradictions of society where those in power clearly do not lead the people, where the elites are clearly in opposition to the people, and in some cases will go to great lengths, including torture and murder, to keep their positions.

Occupy Wall Street for the moment remains a relatively calm demonstration, with non-violence being one of its hallmarks (the other main one being that it is essentially leaderless). The elites will look for weaknesses and try to exploit them. The elites’ main weapon for now is the overall tenor of fear that they present to society: fear of communism, fear of terrorism, fear of crime; all embellished by the corporate media to both entertain and contain the thoughts of the hopefully ignorant masses.

The lessons learned from the efforts of the Palestinians can be incorporated into the occupy movement. What the state (of Israel, the U.S., etc.) fears most of all is the hope that people can live together based on justice and equality for all. Non-violence becomes a pro-active dynamic, with actions taken that are similar in nature to civil disobedience (in cultures where there is civil law, rather than military rule). Another aspect is that of normalization—the elites want a leader, they want to negotiate, they want to buy off the leaders (or imprison and decapitate them to instill fear). Non-violence disallows normal relations; the goal is to replace the subservient position with one of equality in all areas. In other words, through non-violent resistance, the people (Palestinians, Occupy movement, etc.) are not accepting the status quo, are not accepting that the media will be able to present a picture that life continues as normal within the elites’ mode of controlling society.

Non-violent protest can lead to very violent counter-actions. If that happens to the Occupy movement, it will be seen around the world, and the world, once again, will see that what the U.S. claims about freedom and human rights is simply rhetorical fodder to cover up their real interests in power and control of people and resources. If nothing else, the Occupy idea is out—corporate wealth is creating great inequalities within the U.S. (and Canada, and Mexico, and Europe, and any other nation that supports the globalization of capital and the governance of corporations over sovereign nations).

Ideas cannot be removed once put out. Non-violence is the best way to maintain the message and keep the pressure on in an otherwise violent—threatened or applied—system.