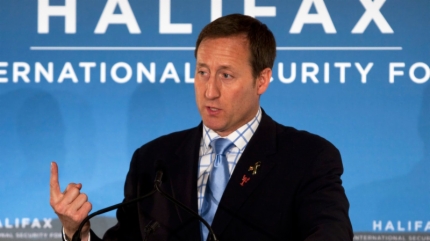 I did not catch as much of this forum as I would have liked, but if what I saw was indicative of the whole affair, then it was mainly a self-promoting affair concentrating on aligning thoughts on Syria, Libya, and Iran. While attempting to do this, what was really displayed is that it was a forum to: equate democracy and free markets, separate Islam from governance vis a vis secular governance, reinforce the right to intervene in sovereign nations, and support Israel by omission.

For a security conference in context within the western political scene, it is only natural that Iran, Libya, and Syria were the focus of many comments. What permeates the discussion is the usual within western diplomatic circles, the contradictions of double standards and the lack of context.

The Turkish representative, Suat Kimklioglu, spoke wisely about the situations in Libya and Syria. He recognized the validity of the “greed” argument for western interests in Libyan oil as being “valid.” He suggested that what was needed was an increase in the diplomatic toolbox other than bombing other countries, and said we do harm if we talk about different zones of military intervention, an idea in which Canada had the lead in developing. At the present time, he said there was “no support…for military intervention” by Syrians. He finished saying that revolution becomes armed insurrection when military units fight each other, and it is then beyond the pale of the international community to interfere.

The response from Canada’s Defense Minister Peter Mackay was his usual moral philosophizing that permits bombing other countries. He started by saying that “our own democratic institutions need to support” such intervention—which in most countries, they do, but one must keep in mind that the interests of the “institutions” frequently do not reflect the will of the majority (most elections are won on personality or domestic issues, not foreign affairs issues). As the Conservative majority in Canada reflects a vote of only eighteen per cent of all Canadians, the “institution” may support the intervention, the people widely do not.

Mackay continued saying that the right to protect must operate on “principle” in which there is a “tipping point” that leads to intervention when all options exhausted. He asked rhetorically, “When is it justified to intervene in a sovereign country?” and answered himself with the example of Libya, as it “required international intervention.”

So much for principles.

The desire for oil and water, the desire to eliminate an African central bank and currency, the desire to create a NATO lake of the Mediterranean all played parts in the intervention by NATO. The idea of genocide by the Libyan government cannot be verified. Certainly there was killing, but the evidence for genocide is non-existent, other than the propaganda put out by the rebel leaders in the eastern provinces.

Next on Mackay’s arguments was a very brief statement on Israel-Palestine when he indicated that the “right to protect” would not kick in yet as the situation was not appropriate (more on this below). Mackay quickly turned to Iran, indicating that the “Persian people want to be masters of their own destiny,” they are a “modern educated clear thinking people under the thumb of a brutal regime.” Whoa! Well, yes, but what about Bahrain? Yemen? Saudi Arabia? And Palestine, clearly modern and educated and under the thumb of a brutal regime? Nary a word.

Mexico entered the argument briefly, as a question was put forward about interventions in Latin America, in particular Mexico and Central America. Mackay prevaricated, talking about the “sanctity of a sovereign state” and “democracy,” the usual platitudes used for friendly regimes. With 40,000 deaths in the last five years in the drug wars, most of the deaths in the northern border zone with the U.S., there is certainly evidence for a need to protect. The main issue here of course is not the deaths, nor the brutality of the Calderon government, but the knowledge that most of the drugs go to the U.S., and most of the armaments (seventy per cent) come from the U.S. Intervention already exists within Mexico, it is the ignored obviousness of the depredations of the NAFTA agreement, and the declaration of the war on drugs, that cannot be won if the U.S. does not clean up its own act.

Notable by their absence are Russia and China. If there is to be security in the world, one would think that they too would be involved in the discussion. Instead they came in for some negative comments. First was their “isolation” at the UN as noted by French nuclear ideologue Camille Grand, in relation to Syria. MacKay mentioned this as well that the “options available short of military interventions” should have “another level against enablers…without naming names,” but this gossip column level dialogue clearly meant Russia and China. Further statements about the Security Council indirectly reinforced these asides against Russia and China, referencing the blocking of actions by the Security Council on Syria by these two states.

These side attacks highlight the nature of the forum’s double standards.

How many times have the U.S. and Israel stood apart from the rest of the world while Israeli actions were condemned by the General Assembly, and then Security Council actions were blocked by the U.S.? After a war of ethnic cleansing and murder of civilians followed by a brutal forty year occupation and expropriation of indigenous land rights, have not the Palestinian people reached the “tipping point” in which the right to protect should have become obvious long ago? Does not the “moral clarity” that should not leave any doubt as to where we stand on Syria/Iran, as expressed by David Kramer of Freedom House, also apply to Israel? How many countries has Israel attacked? How many countries has Iran attacked? In how many countries has the U.S. had covert or overt operatives help overthrow a democratically elected government?

The participants put an aside to Kimklioglu about the nature of his Islamic government, insinuating that it was not a democracy. Why cannot a democracy include the religion of the country? It certainly does in Israel, according to Canada and the U.S, but it has created a society that is an ethnocracy and not a democracy. What about the U.S., with its never-ending election process that can act only on the surveillance of AIPAC and the Christian right? Canada is following suit, with its libertarian dominionist Christian emphasis under the Conservatives, widely disguised as “Canadian values” (remember that eighteen percent figure from above). It’s confusing. Israel is declared a democracy, the only true one in the Middle East, yet promotes racist and theocratic ideas in a government without a constitutional background. According to the Conservatives in Canada, “Islamicism” is one of the main threats to the world, yet the clear majority of conflicts in the world are caused covertly or overtly by interventions from the self-pious interveners of nominal western democracies.

I did not see any Israeli names mentioned on the forum website, although I would have no doubts that they were there as observers if not actual participants. The forum supported the double standards of the western elites that promote their own interests in spheres of influence within the Middle East, ignoring the depredations of the military occupation of Palestine and ignoring the reality that their own economic and imperial interests are being served by their interventions in all the countries of the Middle East.

The “Arab spring” has not born real fruit yet, except in Tunisia, where a secular Islamic government has been elected. Egypt is still under the control of the military, not surprising with the billions of dollars the U.S. funnels into them annually. Saudi Arabia is an oligarchic tribal fiefdom, untouched by democracy, freedoms, and human rights, and will remain so as long as the U.S. needs their oil and strategic positioning vis a vis Iran, Israel, Iraq and others. Bahrain is under the security of both Saudi Arabia and the U.S. fifth fleet, savagely denying the rights of the majority of its population. Yemen remains under internal insurrection that has received no approbation from the U.S. or NATO. Iraq is a nation destroyed, and moved closer to Iranian influence, a clear loss for the U.S. belief in its universal values and indispensability.

At the center of it all is that small cancer, almost unnoticed in its daily functioning save when issues relating to Iran surface—Israel. Israel essentially owns U.S. foreign policy in the region, it has “no sense of accountability” and “immunity from the law”—accusations made by Radwan Ziadeh of Syria, ironically, against Syrian immunity from the Security Council; double standards for sure. Israel is the most aggressive nation in the region, having started a series of wars that have killed tens of thousands of people. They occupy Palestinian land as an outpost of western imperialism, a colonial settler state in the wild, wild east. Strangely enough, while Syria tears itself apart, nothing is mentioned of Israeli occupation of the Golan Heights, and its interests in destroying the stability and military power of its neighbors.

Israel has at best estimates up to a few hundred nuclear missiles and would certainly use them to destroy whomever should push come to shove. Militarily, they are the strongest nation in the region and the most belligerent. Their denouncements of the Iranian nuclear program are ridiculous, as they continue to pretend that they do not have nuclear weapons, and have made them outside of the Nuclear non-Proliferation Treaty. They have done so with the feigned ignorance of other countries and the secret support of others.

Israel is at the center of instability in the Middle East. Most of the time it lies low, letting the U.S. do a lot of the dirty work, a lot of the political work, while it quietly—for the mainstream news media—goes about expropriating Palestinian territory, defying international law in all aspects to maintain its ongoing ethnic cleansing of Palestine.

If security is truly desired in the world today, the Middle East is certainly the focus. But it is not terrorism that is the threat. It is the militaristic interests of the U.S. and Israel that maintain the instability and rotten elites within the region, creating the terror that they exploit through the fear factor generated by a compliant media. Until they become the focus of security debates, nothing will be accomplished in the region or globally.

Canada has been an ardent pro-Israeli country for some time. The Halifax International Security Forum serves only as a self-congratulatory event to restate its support of the U.S., NATO, and Israeli actions that try to maintain power and control of the resources and people of the Middle East.