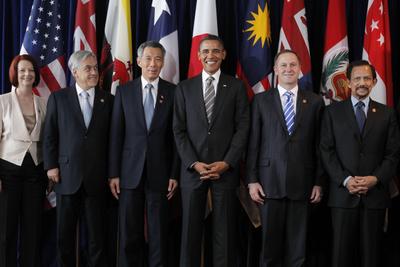 This process of “interdependence” growing into “globalization” and a “dramatic transformation of the international system” has been deliberately pushed by the Trilateral Commission, and similar bodies such as the Bilderberg Group and the Council on Foreign Relations, all of which have significant interlocking memberships. It is not part of some organic historical process; it is a contrivance. The Trilateralist statement above alludes to the broadening of the Trilateralist countries to “others”; again in this instance not just Japan, but the entirety of Asia and the Pacific. Although Trilateralists have dominated the Japanese business and political Establishments, they were hitherto restrained from entering into globalist agreements by the strength of the farming sector that feared American agricultural imports. The globalists have already stated that TPP means little until Japan is incorporated into it:

But if the TPP were to remain as it is presently constituted — without Japan’s inclusion — the agreement would not be the economic boon many hoped it would…. U.S. Deputy Secretary of State William Burns said in Tokyo in October that the United States would “welcome Japan’s interest in the TPP, recognizing of course that Japan’s decision to pursue joining will be made based on its own careful considerations of its priorities and interests.” For its part, Tokyo seems ready to join the talks. Japanese entry has been on the table since October 2010, when then Prime Minister Naoto Kan and his foreign minister, Seiji Maehara, both endorsed it.[16]

However, as with other such regionalist groupings, such as the European Union, the catalyst is recognition of an outer threat; in this case, China, which has recently acted in typically belligerent and overbearing manner towards Japan over disputed territorial claims.[17] It was a similar threat supposedly posed by the USSR that drove Europe into a “union” under American auspices and on US terms. Just what type of protection from Chinese intransigence would be accorded TPP under US Big Brother is indicated by the close relationship that has long existed between China and the same globalists who have been promoting the Pacific union concept. China is represented on the boards of bodies such as TC and the Pacific Basin Economic Council, another long-running lobby that aims for “economic integration.” New Zealand’s FTA with China is pivotal to the village idiot vision of New Zealand’s economy, and any involvement with TPP is going to have to recognize China as a regional power in partnership with the USA, as not as a rival power in the region. The specter of China merely serves as a temporary scare tactic for the imposition of TPP.

What has transpired this month places the statements made by the then Australian Prime Minister Kevin Rudd (presently Foreign Minister) in context, especially in regard to his having delivered the speech before the Asia Society, a long-running Rockefeller think tank that predates the Trilateral Commission. Media reports at the time stated:

Prime Minister Kevin Rudd has called on Asian and Pacific nations to form a regional alliance similar to the European Union. Mr. Rudd says a strong multilateral body is needed to help the region maintain security, foster trade and respond to natural disasters and terrorism. He said Asia needs to react quickly to cope with changes brought about by rapid economic growth in the region.

“The European Union does not represent an identikit model of what we would seek to develop in the Asia-Pacific, but what we can learn from Europe is this – it is necessary to take the first step,” he said.  But he concedes getting Asian nations together will be much tougher than the task faced by the architects of the European Union last century.

“Our special challenge is that we face a region with a greater diversity in political systems and economic structures, levels of development, religious beliefs, languages and cultures than our counterparts in Europe,” he said. “But that should not stop us from thinking big.” The Government will appoint experienced diplomat Richard Woolcott as an envoy to discuss Mr. Rudd’s idea with other countries.

Mr. Rudd says the institution should span the entire Asian-Pacific region including the United States, Japan, China, India and Indonesia.” The danger in not acting is that we run the risk of succumbing to the perception that future conflict in our region may somehow be inevitable,” he said. Mr. Rudd will use his visit to Japan and Indonesia next week to lobby Asian nations on the proposal.[18]

Rudd’s speech was delivered to the Asia Society’s Australian branch, called Austral Asia Center, in Melbourne. Note that Australia is referred to as “Austral Asia” by the Society; a play on words of the term that is normally used to describe Australia and New Zealand. This reflects how the global plutocrats see the nations of Australia and New Zealand, and politicians such as New Zealand’s former Prime Minister Jim Bolger, have long been referring to New Zealand as “an Asian country.”  The “Austral Asian” branch was founded by veteran diplomat Richard Woolcott who was chosen by Rudd to initiate the “Asia Pacific community” with high-level meetings throughout Asia, as noted in the news media reports. Hence, the groundwork was further laid for TPP in 2008.

The head office of the Asia Center in New York states that the Society was founded in 1956 by John D. Rockefeller III.[19] Trustees include: Charles P. Rockefeller and John D. Rockefeller IV. The 50th anniversary of the Asia Society in 2006 was a tribute to the “whole Rockefeller family” and its vision for Asia. The “keynote addresses” were given by Henry Kissinger, the omnipotent perennial government adviser; David Rockefeller,[20] head of the globalist dynasty; John D Rockefeller IV, Charles Percy Rockefeller; and Arthur Ross, a scholar and diplomat of varied experience, who sat on the Rockefeller University Council. The by-line on the Asia Society’s website is: “Preparing Asians and Americans for a shared future.” The “shared future” is that of unrestrained plutocracy, sold with sweeteners, maintained with debt, and enforced with bombs.

[1] For example former New Zealand Labour Minister Mike Moore is a long time enthusiast for a “Pacific community” and was rewarded for his conversion from “socialism” to free trade by being made head of the World Trade Organization. He is currently New Zealand Ambassador to the USA. His globalist credentials include membership of the Trilateral Commission.

[2] “Trans-Pacific Partnership,” Office of the US Trade Representative, http://www.ustr.gov/tpp

[3] “Outlines of the Trans-Pacific Partnership,” ibid.

[4] “The United States in the Trans-Pacific Partnership,” http://www.ustr.gov/about-us/press-office/fact-sheets/2011/november/united-states-trans-pacific-partnership

[7] “The United States in the Trans-Pacific Partnership,” op. cit.

[13] The Trilateral Commission, “About the Organization,” http://www.trilateral.org/about.htm

[16] B K Gordon, “The Trans-Pacific Partnership and the Rise of China: What Japan Joining the TPP Means for the Region,” Council on Foreign Relations, Foreign Affairs, November 7, 2011, http://www.foreignaffairs.com/articles/136647/bernard-k-gordon/the-trans-pacific-partnership-and-the-rise-of-china

[20] In the course of his address David Rockefeller referred to Kissinger as his “dear friend” and Asia Society Chairman Richard Holbrooke as his “old friend”.