Understanding Calls to a Caliphate 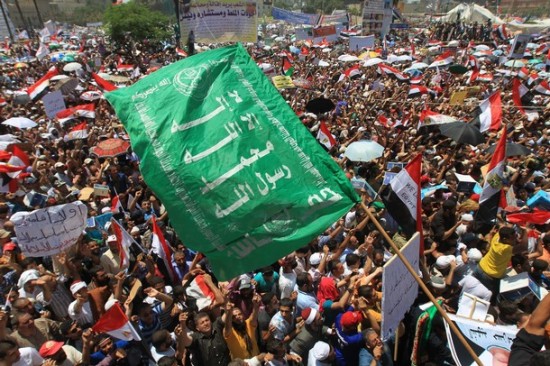 A recent piece in the Economist entitled “Dreaming of a Caliphate” investigates how some thinkers are struggling with the concept of Islamic rule in the “modern” age where it appears the only acceptable polity is that of a Western imposed self-styled “liberal Democracy”. The constant refrain of accusing ‘Islamists’ of wanting to impose an “Islamic dictatorship” or “theocracy” against the will of the people and the West, which then evokes a defensive response from spokesmen of aforementioned groups who claim that they only want the opportunity to participate in any democratic system formulated by the elite (normally the military and former establishment elite), has effectively sidelined any serious discussion about Islamic government as an alternative to the status quo in the political domain. This is problematic, given that there is public sentiment in support of the role of Islam in society, and the debates have clearly been carrying on between people away from the glare of the media only to explode onto the scene of public consciousness as occurred at the Tahrir square demonstrations in Cairo at the end of July which witnessed the consistent explicit pronouncement of Islamic political slogans repeated in unison by hundreds of thousands if not millions of demonstrators. 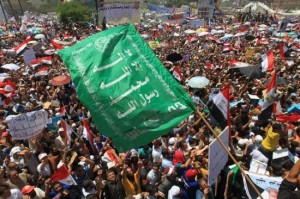 With Western “liberal democracy” perceived as failing to provide true representation for the people, given the lack of political choices, and of real accountability for politicians who are more enthralled to commercial interests than the interests of the electorate. The recent riots in England have highlighted failure at the heart of the purpose of government to provide security for its people. Arguably social justice is hard to find in an economically declining America and Europe, with vast material inequality between the elites and the masses, so the image of an advanced, modern civilization that must be emulated to achieve success has been further tarnished, perhaps fatally. Those looking for change elsewhere are unlikely to feel compelled to follow Western models of politics after suffering under Western models of neo-liberal economics, as was the case in Tunisia and Egypt. Given these circumstances, seeking alternative ways of organizing society could be seen as imperative.

The hegemony of a Western liberal democratic discourse is reflected in a lot of thinking in the Middle East by Islamic scholars and intellectuals, termed “New Islamists” by Raymond Baker, with their belief that “democracy in modern times affords the best means to justice”. Not only in the Middle East, Muslim intellectuals in the Western tradition have also formulated their own ideas about how polity in the Islamic world should be organized. There are those who talk about a separation between religion and the state, though not politics, with Islamic values informing the views of the Muslim part of the population, such as Muqtedar Khan, who firmly states that “Muslims must widely and unambiguously accept that Islam and democracy are compatible”; those who do so are approvingly referred to as “Muslim democrats” whereas others are scolded as “Muslim isolationists”. The economist article mentioned earlier also seems replete with thinkers searching for ways to make Islam “compatible” or “acceptable” to Western philosophy such as the how far could an Islamic polity be compatible with a John Rawls-like democracy. Other Muslim academics such as Khaled Abou el Fadl make the case for liberal democracy as the most effective form of government to protect and promote Islamic values.

But as mentioned by Saba Mahmood in a response to Abou el Fadl, rather than ask how Muslims could become better liberals, can we not ask whether the World could be lived differently, with alternative visions being explored rather than succumbing to the hegemony of Western political ideals?

This hegemony of the superiority and universality of democracy has underlain much of the approach to analyzing the politics of Islamic individuals and groups across the Middle East and general Muslim world. Briefly, analysts normally fall into two broad camps – the first approach holds the incompatibility of Islam and ‘modernity’ as the trigger for regional discontent and the support for various Islamic movements, whereas the second contends that factors such as the failure of secular nationalist movements to resolve the societal problems of poverty and denial of political representation are the main causes of the backlash. However, for all their differences and arguments, since the end of the Cold War, both sides implicitly make liberal democracy as the ultimate reference in their approach to analysis, such that Michael Salla has previously noted that “the relationship between liberal democracy and political Islam is unidirectional: Political Islam either responds to liberal democratic norms by demonstrating their consistency with the Islamic heritage; or reacts to them as contrary to the Islamic heritage”.

Submitting to or enforcing a hegemonic discourse that assumes the universality of a “democracy”, which is in any event contested, with anything else labeled as “authoritarian” will hardly help in understanding what each side is positing. The reaction by some prominent Islamic groups to the events of July 2011 in Tahrir square was to position themselves as the “moderate” face of Islamic politics, ready to play by the “rules of the game” as defined from outside – by Western democratic on-lookers – and a small number of secularists within the region. This kind of politicking, though perhaps understandable (and to some extent expected from the more pragmatic elements), actually hinders and clouds any possible discussions regarding the role of Islam in the polity of the region.

There is clearly a rising religiosity in the Middle East and wider Islamic world, and so the perceived authenticity and genealogy of the various claims about whether “Islamic government” exists and what it looks like will likely play a greater role in garnering support, though the continued imposition and participation in “democratic discourse” may simply dilute and undermine the authenticity of the ideas of all sides of the debate. While there are continuing discussions about the right of different cultures to develop their own “indigenous” form of democracy, or widening definitions of hybrid-regimes, the possibility that a vision of an elected, accountable government can be articulated outside of the paradigm and vocabulary of universally claimed democratic ideals remains either overlooked or dismissed, arguably narrowing the potential for meaningful dialogue and understanding. It can be proposed that the orthodox Islamic theories of the Caliphate system represent an elected, accountable government and the rule of law – all of which address the core grievances felt by the protesters from Tunisia through Egypt, Libya, Yemen, Syria, Jordan to Bahrain – is such a vision and deserves to be taken seriously in its own right.

The most famous exposition of the Islamic theory of State was by the scholar al-Mawardi, who claimed that the establishment of the Caliphate was an Islamic obligation agreed upon by the scholars. His treatise al-Ahkam al-Sultaniyya (the rules of governance) remains one of the major classical references for Islamic political theory. In it, he explains that the ruler is either elected by the peoples’ representatives or through being nominated by the previous Caliph. The Caliph’s responsibilities include implementing the hudood (punishments explicitly proscribed in Islam for acts such as theft, rebellion, public acts of extra-marital intercourse), collecting and distributing the taxes according to the Sharia prescriptions, and to protect and expand the borders of the Islamic State. There is a contract, known as bay’a, between the Caliph and those who elected him, that basically pledges allegiance to him as long as he fulfils his responsibilities to rule by the Quran and Sunnah. Though there are differences over the validity of those who usurp the power, the majority consensus is that bay’a is “not contracted without consent and choice”.

These ideas were not articulated by al-Mawardi alone. His claim of a consensus upon the obligation of the Caliphate is mirrored by everyone else who wrote on the subject in the period, and based upon earlier sources which articulated Islamic political thought. Early political treatises written to advise the Islamic government can be found dating back to the 8th Century, when, for example, the Persian scholar Abdullah ibn al-Muqaffa argued that government only merited obedience if it obeyed Quran and Sunnah. Recourse to some of ibn al-Muqaffa’s original text finds him telling the ruler that he has the sole responsibility for applying the hudood and other rules from the Sharia, and that “whoever disobeys the Imam in those issues or abandons him” is blameworthy, which can only mean that he considered establishing a ruler to govern as obligatory since it was the only way for the rules of Islam to be applied. Ibn al-Muqaffa also held the ruler accountable for applying the Sharia and stated that if he “prohibited prayer and fasting and pilgrimage” or “prevented the hudood and permitted what Allah had made forbidden” he was not to be obeyed.

This concept of accountability based upon the ruler’s application of Islamic law is traced back to words attributed to one of the foremost early Muslims called Abu Bakr, who was the first Caliph appointed after the death of the Prophet through the choice of the people – in words attributed to Ali bin Abi Talib, the son-in-law of the Prophet – “the Prophet did not direct us to anyone to take leadership – and so we decided upon Abu Bakr as his successor”. Amongst the first words recorded by Abu Bakr after taking this position was that “if I do good then support me, and if I do wrong then straighten me”. In his first speech addressing the Muslim community in Medina, he made it more explicit, stating “obey me as long as I obeyed Allah and His Messenger, and if I sinned against them then I have no claim to obedience over you”.

Thus the precedents for elected leadership who had the consent of the governed based upon application of and adherence to the rules of Quran and Sunnah, in other words the Sharia, are found in records of the first generation of Muslim rulers.

The contemporary conceptions of the role of the ruler being chosen by the people to rule them in accordance with the dictates and prescriptions of their Islam and to be accountable accordingly can be seen as coming from the same tradition as the original classical Caliphate theory, basing them on what they consider to be an authentic understanding of the original sources of revelation accepted by mainstream Islam. Without going into the detailed arguments and theological justifications for their various positions regarding the structure that government would take, which would require its own independent study, their theories were built upon the foundations that sovereignty was for the Sharia, that the ruler is elected and accountable for applying Islamic law upon the community within the territory under their authority, and that in origin there should be a single ruler for the Muslims as a nation.