Where Have Libya’s Children Gone? 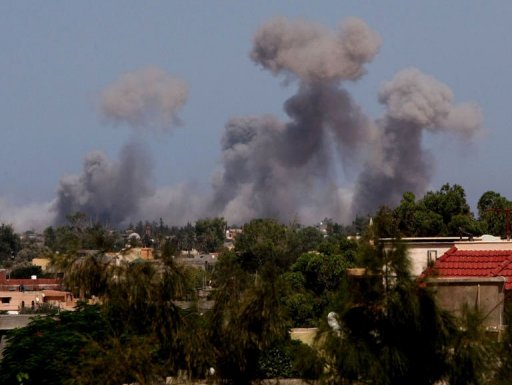 TRIPOLI — The quality of life continues to degrade in certain areas of western Libya while public anxiety noticeably rises over missing Libyan children as the first week of an unusually stressful Ramadan passes.

The shortage of gasoline has become acute, and despite government efforts to curtail price gouging, one taxi driver told this observer yesterday that while the usual price of ‘benzene’ was 3.75 liters (one gallon) for $.40 (forty US cents) he is now having to pay as much as “4 dinars for one liter of petrol!” That is roughly the equivalent of 13 US dollars for a gallon of gasoline, a huge price surge in a country long accustomed to cheap, heavily subsidized fuel. “Informal economy” (black market) fuel arrives in car trunks from the Tunisian border, and it’s increasingly common to see fellows with a make shift funnel trying to get more benzene into their vehicle tanks than they splash and spill on neighborhood streets.

Walking around the “medina” off Omar Muktar Street near my hotel yesterday afternoon, the angst over deteriorating conditions is apparent. Shops, like homes, are now subject to rolling blackouts and quickly become hot and stuffy, discouraging would-be customers from entering. Some food stores have to discard milk and other perishable items given the up to 11-hour power cuts that send temperatures above 100°F. One gentleman on Rashid Street in downtown Tripoli said his family had not had power for five days, and the pump that supplies water to his apartment building stopped working, so they lack two essential utilities.

NATO’s arguable act of piracy earlier this week in commandeering the fuel tanker ship Cartagena off the coast of Malta, which was bringing gasoline to Tripoli and sending it instead to rebel militia based close to Benghazi, is yet again explained from NATO HQ as necessary for “protecting the civilian population of Libya.”

According to Libya’s Deputy Foreign Minister Khaled Kaim, “The age of piracy is coming back to the Mediterranean because of NATO.”

Some frustrated shop keepers just shutter their shops and seek relief at the beach or take a nap waiting for sundown and their Ramadan Iftar (feast) to begin. But lack of electricity even affects its preparation. (Note: 15 minutes before this writing, NATO bombed the public beach near my hotel as three other bombs landed nearby—targets unknown.)

Every time a bomb blast is heard, a chorus of passersby and kids invariably point toward the bomb site and watch the rising white or black smoke (the color depending on the type of bomb or missile) and some shout, “F— NATO! F— Obama!” Etc.

If a foreigner is confronted by angry citizens who may blame Americans for NATO’s bombing, a sure fire way to quickly reduce crowd tension is for the foreigner to make the peace sign and make a fist with his other hand and chant a few times: “Allah! Mohammad! Muammar! Libye! Abass!” (“God! Mohammad! Qadaffi! Libya! That’s all we need!”) The locals appreciate the sentiment, and pre-teens often join the popular chant and dance.

As of the morning of August 7, NATO statistics show that since March 31, NATO forces have launched 18,270 sorties, mainly against Western Libya, including 6,932 bomb/missile strike sorties. On the night of August 6, there were 115 sorties, including 45 bombings, of which 12 were in central Tripoli starting a 10 p.m.

To their great credit, some Congressional staffers on the US Senate Armed Services Committee who liaise with the Pentagon have acted on constituent complaints and have criticized NATO’s incomplete description of its bombing of Libyan civilians.

For example, earlier this week NATO reported its bombing of the village on Zlitan, about 160 miles east of Tripoli in the Western Mountains, as follows: “In the vicinity of Zlitan:1 Ammunition Storage Facility, 1 Military Facility, 2 Multiple Rocket Launchers.”

However, still absent from this particular NATO report on its website is the fact that its bombing attack killed the wife and two children of Mustafa Naji, a local Zlitan physics teacher. Mustafa’s wife, Ibtisam, and their two children, Mohammad, 5, and Muttasim, were pulverized. Once again, NATO said it could not confirm the “accidental killings” but would investigate.

Where are the children?

Also of growing public and government concern in Western Libya is the whereabouts of 53 female and 52 male children aged one to 12 years, and another group ranging from 12 to 18 years, both part of a government-run home for orphans and abused children that until February was operating in Misrata, now under rebel control.

According to several reports over the past three months and testimony presented last Thursday evening to the international media gathered at the Tripoli Rexis Hotel, by the General Union for Civil Society Organizations, the 105 children, part of more than 1000 missing, were “kidnapped” by rebel forces as they entered Misrata and went on a killing spree, some of which has been documented by Human Rights Watch and Amnesty International among other groups. There is no question that the children are no longer in their sheltered facility. But from there what became of them remains a mystery.

The Libyan government claims the youngsters were kidnapped by rebels who went on a rampage in late February. Several reports from eyewitnesses claim that the children were last seen being put onto either a Turkish, Italian, or French boat. More than one witness claimed to have witnessed some of the children being sold in Tunisia. On his Twitter page, the local Russian Telesur reporter said that “several sources have affirmed that the 105 children were taken out of the country in a ship that could be Turkish, French or Italian.”

Libyan Social Affairs Minister Ibrahim Sharif told reporters in Tripoli this week that, “We want the truth and we hold those countries responsible for the well-being of these children who are neither soldiers nor combatants.” Sharif added that a rebel doctor captured by government troops testified that some of the orphans had been taken to France and Italy. Given Misrata’s history as a main North African slave trading port, a fact that today partially explains tensions among the one third of Libya’s population that is black and who are descendants of slaves, many of whom live in western Libya in villages now fighting the Misrata and Benghazi based rebels, concern is acute.

While Libya has had perhaps the most strictly enforced child protection laws in the Middle East and Africa, people here remember clearly that France was at the center of a scandal in 2007 when aid workers from the Zoe’s Ark charity attempted to fly 103 children out of Chad, to the south of Libya, whom they said were orphans from neighboring Sudan. International aid staff later found that the children were in fact Chadian and had at least one living parent. People here fear a similar fate for the Libyan youngsters.

Also on people’s minds in Libya is what happened two years ago in Haiti when “orphans,” according to local authorities, were kidnapped. Given the epidemic of human trafficking in this region, especially of children, fears are well founded.

NATO has not replied to inquiries demanding information about the disappeared children. Nor has UNICEF, Save the Children, or Secretary of State Clinton’s office. Ohio Congressman Dennis Kucinich has agreed to demand that the White House order an immediate investigation, and of course any human rights advocate could raise this issue in the West and demand an urgent inquiry from her/his government.

The Libyan government, as well as both the Roman Catholic Papal representative Bishop Giovanni Martinelli, and Father Daoud of the Anglican Church of Christ the King, in Tripoli have demanded that the UN investigate and find the children.

As for the National Transition Council, its spokesman denied charges that they have sold the children and claim that the Libyan government in Tripoli have all the children and that they are using them as human shields at the now five times bombed Bab al Azizya complex in central Tripoli. No known human rights organization or journalist who has investigated this claim has reported seeing any sign of the children at Bab al Azizya. The General Union, noted above, has photos and names and ages of all the missing children and have widely publicized them.

More than a dozen social welfare organizations, women’s groups and Libya’s Lawyer syndicates have launched an intensive media and public involvement campaign to find the children who have now been missing for nearly six months.