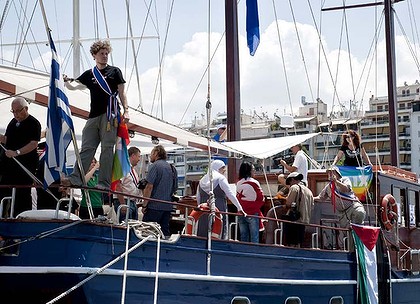 The reports that two of the foreign flagged ships planning to be part of the ten vessel Freedom Flotilla II experienced similar forms of disabling sabotage creates strong circumstantial evidence of Israeli responsibility. It stretches the imagination to suppose that a sophisticated cutting of the propeller shafts of both ships is a coincidence with no involvement by Israel’s Mossad, long infamous for its overseas criminal acts in support of contested Israeli national interests.

Recalling the lethal encounter in international waters with Freedom Flotilla I that took place on 31 May 2010, and the frantic diplomatic campaign by Tel Aviv to prevent this second challenge to the Gaza blockade by peace activists and humanitarian aid workers, such conduct by a state against this latest civil society initiative, if further validated by incriminating evidence, should be formally condemned as a form of ‘state terrorism’ or even as an act of war by a state against global civil society.

The Israeli Government has so far done little to deny its culpability. Its highest officials speak of the allegations in self-righteous language that is typically diversionary, asserting an irrelevant right of self-defense, which supposedly comes mysteriously into play whenever civil society acts nonviolently to break the siege of Gaza that has persisted for more than four years.

From the perspective of the obligations to uphold international law it is the Flotilla participants who are acting legally and morally, certainly well within their rights, and it is Israel and their friends that are resorting to a variety of legally and morally dubious tactics to insulate this cruel and unlawful blockade from what is essentially a symbolic challenge.

The behavior of the Greek Government, surely a reflection of its precarious financial and political situation, also violates the law of the sea: foreign flagged vessels can be detained in port only if they are acting in violation of national law or are proven to be unseaworthy and dangerous to international navigation. Otherwise, interference by detention or by seizing while en route within Greek territorial waters is an unlawful interference with the right of innocent passage. Greece would be very vulnerable to defeat and damages if the Freedom Flotilla victims of these encroachment on rights were to have recourse to the Hamburg International Tribunal for Law of the Sea.

The most relevant precedent for such government-sponsored sabotage is the Rainbow Warrior incident of 1985. There French agents detonated explosives on a Greenpeace (an environmental NGO) fishing trawler docked in the Auckland, New Zealand harbor prior to proactively challenging the French plans to conduct underwater nuclear tests off the shore of the nearby Pacific atoll, Moruroa. Fernando Pereira, Greenpeace photographer for the mission, was killed by the explosions, although the devices were detonated at night when no one from Greenpeace was expected to be on board the vessel. At first, the French government completely denied involvement, later as incriminating evidence mounted, Paris officially claimed that its agents who were identified as being near the scene were only spying on Greenpeace activities and had nothing to do with the explosives, and later still, as the evidence of French culpability became undeniable, officials in France finally admitted government responsibility for this violent undertaking to eliminate activist opposition to their nuclear test, even acknowledging that the operation had been given the bizarre, although self-incriminating, code-name of Operation Satanique.

After some further months of controversy, the French Prime Minister, Laurent Fabius cleared the air by issuing a contrite statement: “The truth is cruel. Agents of the French secret service sank the boat. They were acting on orders.” (The decision to destroy the Rainbow Warrior was later confirmed to have come from France’s supreme leader at the time, the president of the Republic, Francois Mitterand.) The French agents who had by then been arrested by the New Zealand police, charged with arson, willful damage, and murder, but due to pressure from the French government that included a threatened European economic embargo on New Zealand exports, the charges were reduced. The French defendants were allowed to enter a guilty plea to lesser charges of manslaughter that was accepted by the Auckland court, resulting in a ten-year prison sentence, and later supplemented by an inter-governmental deal that virtually eliminated the punishment. The French paid New Zealand $6.5 million and issued an apology, while the convicted agents were transferred to a French military base on Hao atoll, and were later wrongly released only two years after being genteelly confined in comfortable quarters provided by the base.

It is useful to compare the Flotilla II unfolding experience with the Rainbow Warrior incident. At the time, the French nuclear tests in the Pacific were considered legal, although intensely contested, while the blockade of Israel is widely viewed as a prolonged instance of collective punishment in violation of international humanitarian law, specifically Article 33 of the 4th Geneva Convention. Although Israel could argue that it had a right to monitor ships suspected of carrying arms to occupied Gaza, the Freedom Flotilla II ships made themselves available for inspection, and there was no sufficient security justification for the blockade as the investigation by the UN Human Rights Council of the 2010 flotilla incident made clear. The overriding role of the blockade is to inflict punitive damage on the people of Gaza. Even before the blockade was imposed in 2007 all shipments at the Gaza crossing points were painstakingly monitored by Israel for smuggled weapons.

A person was unintentionally killed by the French acts of sabotage, and so far no one has died as a result of these efforts to disable and interfere with Flotilla ships, although the Irish vessel, MV Saoirse (‘freedom’ in Gaelic), was disabled in such a way that if the damage had not been discovered before heading to sea, the ship reportedly would have likely sunk with many passengers put at extreme risk of death. Perhaps the most important distinction of all is the failure to claim any right to act violently against peaceful protesters, even though the French state was officially engaged in an activity directly associated with its national security (weapons development). In contrast, the Israelis are seeking to avoid having their universally unpopular and criminal Gaza policies further delegitimized, and claim the entitlement as a sovereign state to engage in violent action, even if it endangers nonviolent civilians. In effect, it is a declaration of war by Israel against global civil society as over 50 nationalities are represented among the passengers on the Flotilla ships.

Any reasonably informed person knows that the Israeli alleged concern about weapons smuggling to Gaza is a smokescreen without substance. The flotilla organizers have credibly pledged nonviolence, have offered to allow inspectors to examine the cargo, and have invited respected journalists to be on board the vessels. There is zero prospect of weapons being allowed on board any of these ships (even without any inspection), and the Israelis undoubtedly realize this, as does Washington. To insist that this demonstrably peaceful activism mainly by dedicated adherents of nonviolent militancy poses a threat to Israeli security while hardly ever mentioning the hundreds of unmonitored tunnels that are in daily use along the Gaza border with Egypt makes a mockery of the Israeli argument.

Long before the flotilla actually set sail, with typical propagandistic fervor and diplomatic finesse, supported every inch of the way by its many powerful friends in Washington, Israel zealously engaged in a concerted hasbara campaign to discredit the shipment of humanitarian aid to the besieged people of Gaza. By verbal acrobatics reminding us that Orwell’s warnings about the extreme debasement of political language (1984) remains all too relevant as ever, Israel has been trying to portray committed peace activists and cultural icons (e.g. Alice Walker) as harboring ‘terrorists’ and arms dealers, if not being themselves willing accomplices. As might be expected, much of the media, especially in the United States, has taken at face value such scandalous accusations, or at the very least has put them forward as credibly accounting for the bitter complaint by Israel that Flotilla II is being used as a humanitarian front behind which arms are being smuggled into Israel.