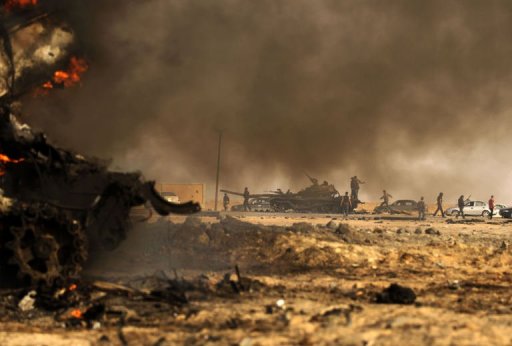 The words they find it very difficult to say — “civil war”.

Libya is engaged in a civil war. The United States and the European Union and NATO — The Holy Triumvirate — are intervening, bloodily, in a civil war. To overthrow Moammar Gaddafi. First The Holy Triumvirate spoke only of imposing a no-fly zone. After getting support from international bodies on that understanding they immediately began to wage war against Libyan military forces, and whoever was nearby, on a daily basis. In the world of commerce this is called “bait and switch”.

Gaddafi’s crime? He was never respectful enough of The Holy Triumvirate, which recognizes no higher power, and maneuvers the United Nations for its own purposes, depending on China and Russia to be as spineless and hypocritical as Barack Obama. The man the Triumvirate allows to replace Gaddafi will be more respectful. 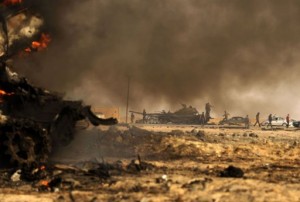 So who are the good guys? The Libyan rebels, we’re told. The ones who go around murdering and raping African blacks on the supposition that they’re all mercenaries for Gaddafi. One or more of the victims may indeed have been members of a Libyan government military battalion; or may not have been. During the 1990s, in the name of pan-African unity, Gaddafi opened the borders to tens of thousands of sub-Saharan Africans to live and work in Libya. That, along with his earlier pan-Arab vision, did not win him points with The Holy Triumvirate. Corporate bosses have the same problem about their employees forming unions. Oh, and did I mention that Gaddafi is strongly anti-Zionist?

Does anyone know what kind of government the rebels would create? The Triumvirate has no idea. To what extent will the new government embody an Islamic influence as opposed to the present secular government? What jihadi forces might they unleash? (And these forces do indeed exist in eastern Libya, where the rebels are concentrated.) Will they do away with much of the welfare state that Gaddafi used his oil money to create? Will the state-dominated economy be privatized? Who will wind up owning Libya’s oil? Will the new regime continue to invest Libyan oil revenues in sub-Saharan African development projects? Will they allow a US military base and NATO exercises? Will we find out before long that the “rebels” were instigated and armed by Holy Triumvirate intelligence services?

In the 1990s, Slobodan Milosevic of Yugoslavia was guilty of “crimes” similar to Gaddafi’s. His country was commonly referred to as “the last communists of Europe”. The Holy Triumvirate bombed him, arrested him, and let him die in prison. The Libyan government, it should be noted, refers to itself as the Great Socialist People’s Libyan Arab Jamahiriya. American foreign policy is never far removed from the Cold War.

We must look closely at the no-fly zone set up for Iraq by the US and the UK (falsely claimed by them as being authorized by the United Nations) beginning in the early 1990s and lasting more than a decade. It was in actuality a license for very frequent bombing and killing of Iraqi citizens; softening up the country for the coming invasion. The no-fly zone-cum invasion force in Libya is killing people every day with no end in sight, softening up the country for regime change. Who in the universe can stand up to The Holy Triumvirate? Has the entire history of the world ever seen such power and such arrogance?

And by the way, for the 10th time, Gaddafi did not carry out the bombing of PanAm Flight 103 in 1988.[1] Please enlighten your favorite progressive writers on this.

Is anyone keeping count?

I am. Libya makes six.

Six countries that Barack H. Obama has waged war against in his 26 months in office. (To anyone who disputes that dropping bombs on a populated land is an act of war, I would ask what they think of the Japanese bombing of Pearl Harbor.)

Is there anyone left who still thinks that Barack Obama is some kind of improvement over George W. Bush?

Probably two types still think so. 1) Those to whom color matters a lot; 2) Those who are very impressed by the ability to put together grammatically correct sentences.

It certainly can’t have much otherwise to do with intellect or intelligence. Obama has said numerous things, which if uttered by Bush would have inspired lots of rolled eyeballs, snickers, and chuckling reports in the columns and broadcasts of mainstream media. Like the one the president has repeated on a number of occasions when pressed to investigate Bush and Cheney for war crimes, along the lines of “I prefer to look forward rather than backwards”. Picture a defendant before a judge asking to be found innocent on such grounds. It simply makes laws, law enforcement, crime, justice, and facts irrelevant.

There’s also the excuse given by Obama to not prosecute those engaged in torture: because they were following orders. Has this “educated” man never heard of the Nuremberg Trials, where this defense was summarily rejected? Forever, it was assumed.

Just 18 days before the Gulf oil spill Obama said: “It turns out, by the way, that oil rigs today generally don’t cause spills. They are technologically very advanced.” (Washington Post, May 27, 2010) Picture George W. having said this, and the later reaction.

A week later, on March 10, State Department spokesman P.J. Crowley told a forum in Cambridge, Mass. that Wikileaks hero Bradley Manning’s treatment by the Defense Department in a Marine prison was “ridiculous, counterproductive and stupid.” The next day our “brainy” president was asked about Crowley’s comment. Replied the Great Black Hope: “I have actually asked the Pentagon whether or not the procedures that have been taken in terms of his confinement are appropriate and are meeting our basic standards. They assure me that they are.”

Right, George. I mean Barack. Bush should have asked Donald Rumsfeld whether anyone in US custody was being tortured anywhere in the world. He could then have held a news conference like Obama did to announce the happy news — “No torture by America!” We would still be chortling at that one.

Obama closed his remark with: “I can’t go into details about some of their concerns, but some of this has to do with Pvt. Manning’s safety as well.”[3]

Ah yes, of course, Manning is being tortured for his own good. Someone please remind me — Did Georgieboy ever stoop to using that particular absurdity to excuse prisoner hell at Guantanamo?

Is it that Barack Obama is not bothered by the insult to Bradley Manning’s human rights, the daily wearing away of this brave young man’s mental stability?

The answer to the question is No. The president is not bothered by these things.

How do I know? Because Barack Obama is not bothered by anything as long as he can exult in being the president of the United States, eat his hamburgers, and play his basketball. Let me repeat once again what I first wrote in May 2009:

The problem, I’m increasingly afraid, is that the man doesn’t really believe strongly in anything, certainly not in controversial areas. He learned a long time ago how to take positions that avoid controversy, how to express opinions without clearly taking sides, how to talk eloquently without actually saying anything, how to leave his listeners’ heads filled with stirring clichés, platitudes, and slogans. And it worked. Oh how it worked! What could happen now, having reached the presidency of the United States, to induce him to change his style?

Remember that in his own book, “The Audacity of Hope”, Obama wrote: “I serve as a blank screen on which people of vastly different political stripes project their own views.”

Obama is a product of marketing. He is the prime example of the product “As seen on TV”.