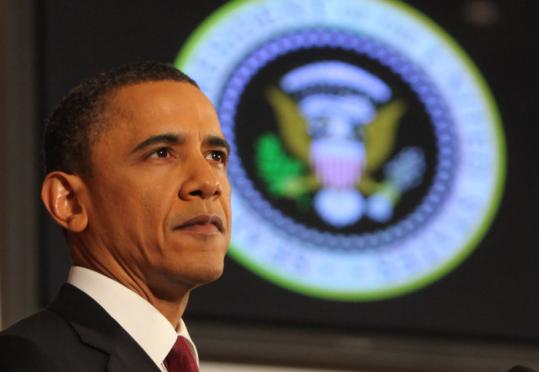 What does the world think?  Obama has been using air strikes and drones against civilians in Afghanistan, Pakistan, Yemen, and probably Somalia.  In his March 28 speech, Obama justified his air strikes against Libya on the grounds that the embattled ruler, Gadhafi, was using air strikes to put down a rebellion.

Gadhafi has been a black hat for as long as I can remember.  If we believe the adage that “where there is smoke there is fire,” Gadhafi is probably not a nice fellow. However, there is no doubt whatsoever that the current US president and the predecessor Bush/Cheney regime have murdered many times more people in Iraq, Afghanistan, Pakistan, Yemen and Somalia than Gadhafi has murdered in Libya.

Moreover, Gadhafi is putting down a rebellion against state authority as presently constituted, but Obama and Bush/Cheney initiated wars of aggression based entirely on lies and deception. 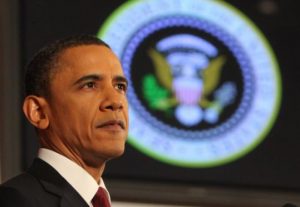 Yet Gadhafi is being demonized, and Bush/Cheney/Obama are sitting on their high horse draped in cloaks of morality. Obama described himself as saving Libyans from violence while Obama himself murders Afghans, Pakistanis, and whomever else.

The Bush/Cheney/Obama wars of naked aggression have bankrupted America.  Joseph Stiglitz, former chairman of the President’s Council of Economic Advisers, concluded that the money wasted on the Iraq war could have been used to fix America’s Social Security problem for half a century.  Instead, the money was used to boost the obscene profits of the armament industry.

The obscene wars of aggression, the obscene profits of the offshoring corporations, and the obscene bailouts of the rich financial gangsters have left the American public with annual budget deficits of approximately $1.5 trillion. These deficits are being covered by printing money.  Sooner or later, the printing presses will cause the US dollar to collapse and domestic inflation to explode. Social Security benefits will be wiped out by inflation rising more rapidly than the cost-of-living adjustments.  If America survives, no one will be left but the mega-rich.  Unless there is a violent revolution.

Alternatively, if the Federal Reserve puts the brake on monetary expansion, interest rates will rise, sending the economy into a deeper depression.

Washington, focused on its newest war, is oblivious to America’s peril. As Stiglitz notes, the costs of the Iraq war alone could have kept every foreclosed family in their home, provided health care for every American child, and wiped out the student loans of graduates who cannot find jobs because they have been outsourced to foreigners.  However, the great democratic elected government of “the world’s only superpower” prefers to murder Muslims in order to enhance the profits of the military/security complex.  More money is spent violating the constitutional rights of American air travelers than is spent in behalf of the needy.

The moral authority of the West is rapidly collapsing.  When Russia, Asia, and South America look at Europe, Australia and Canada, they see American puppet states that contribute troops to the aggressive wars of the Empire. The French president, the British prime minister, the “president” of Georgia, and the rest are merely functionaries of the American Empire.  The puppet rulers routinely sell out the interests and welfare of their peoples in behalf of American hegemony. And they are well rewarded for their service. One year out of office former British Prime Minister Tony Blair had a net worth of $30 million.

In his war against Libya, Obama has taken America one step further into Caesarism. Obama did Bush one step better and did not even bother to get congressional authorization for his attack on Libya.  Obama claimed that his moral authority trumped the US Constitution.  The hypocrisy reeks.  How the public stands it, I do not know:

“To brush aside America’s responsibility as a leader and–more profoundly–our responsibilities to our fellow human beings under such circumstances would have been a betrayal of who we are. Some nations may be able to turn a blind eye to atrocities in other countries. The United States of America is different. And as president, I refused to wait for the images of slaughter and mass graves  before taking action.”

This from the Great Moral Leader who every day murders civilians in Afghanistan and Pakistan and Yemen and Somalia and now Libya and who turns a blind eye when “the great democracy in the Middle East,” Israel, murders more Palestinians.

The American president, whose drones and air force slaughter civilians every day of the year went on to say Libya stands alone in presenting the world with “the prospect of violence on a horrific scale.”  Obviously, Obama thinks that one million dead Iraqis, four million displaced Iraqis, and an unknown number of murdered Afghans is just a small thing.

The rest of Obama’s speech showed a person more capable of DoubleSpeak and DoubleThink than Big Brother and the denizens of George Orwell’s 1984.

How does a person as totally absurd as Obama expect to be taken seriously?