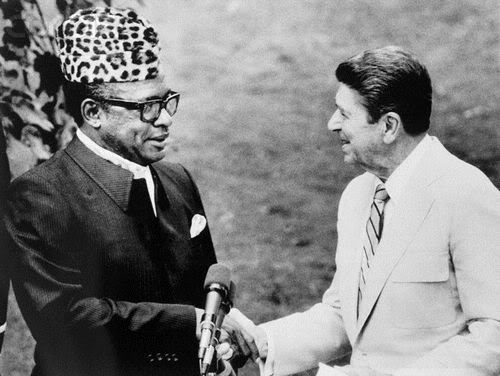 The year is 1974. It is my second Sunday in Brazzaville. I am for the first time invited home to a family in the district of Poto Poto. The house is made of sun-dried clay. The door is painted in green and red. The houses are lying tightly against each other. Red earth. A small child crawls into my lap.

We eat lunch in front of the house. Dried fish, chicken stew, zacka zacka and manioc. Before we have finished lunch, the son calls that the football is about to begin. We move into a dark, cramped room. In the small room the furniture is placed tightly along the walls and a few paintings are hanging high up by the ceiling. A naked light bulb gives light. 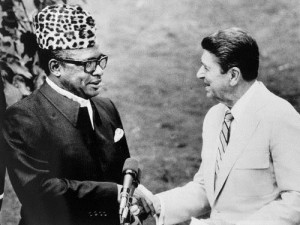 It is a broadcast from Kinshasa. The broadcast begins with Mobutu coming down from the heavens, through the clouds. Each day’s television broadcast ends with Mobutu returning to heaven; disappears off while the national anthem fades out. Mobutism is being established and God has been made visible. He comes every day into peoples’ homes via television.

When the introduction is over, we see how Mobutu lands by helicopter at the big football stadium in Kinshasa. More than 30,000 spectators have gathered. They have been waiting for a long time. Mobutu climbs the small bandstand that has been built in the middle of the stadium. In his leopard hat, Mobutu speaks, and the crowds are clapping their hands and singing. I do not understand very much; my host just says calmly, “Mats, wait, you have to stay and see the rest.”

Four soldiers lead a prisoner towards the bandstand, a ragamuffin, bound by the hands and the feet, and with a noose around his neck. Mobutu humiliates him and asks the people what to do with him. The people cry out, “Kill him, kill him.” The prisoner is led away. The next prisoner appears and the procedure is repeated. A total of seven death sentences were imposed.

A few hours later, I return to the mission station in Plateau and meet missionary Bryngård. I am quite taken and shocked and tell him what I have seen. Bryngård says, “This happens all the time. We’re not the only ones who know about it, all foreign diplomats have seen the same thing. Mats, never forget that Mobutu is being supported by the West. Everything has become permissible in the fight against Communism.” It is as if Bryngård could have said, Mobutu is a son of a bitch, but he is our son of a bitch.

When I experienced this, Mobutu had only been in power for nine years. 23 years later, in 1997, he was forced into exile. During all those years he was supported by us in the West. Mobutu had our support while the people suffered under growing poverty.

The year is 1975. I stand on the border to Cabinda. At my side, I have pastor Zamba. Now an old man, a happy man. Zamba listens to a small black transistor radio. We have sought ourselves up on a small hill where he knew that we would get good reception. Up here, the Congo, in the valley below the enclave of Cabinda. Zamba waiting, waiting. Yes, he says, we have waited for a long time. When the radio voice from Luanda finally proclaims that Angola has become free, the tears flow freely down Zamba’s cheeks. “Another free people in Africa,” says Zamba. Quietly, as if within himself, he continues, “I hope the people of Angola get to experience true freedom as opposed to us in French Congo which is still governed from Paris.”

The year is 1976. I have gotten to know Claude. A young French engineer working for the French company Elf. Out in the sea, off the coastal town of Pointe Noire, he’s looking for oil. Claude is a socialist. Ashamed of his job. Had wanted to work on something completely different, but “you have to take the few jobs that are available.” A few weeks before I leave the Congo, we meet one last time. We meet at the large waves, south of the small coastal town. We drink wine and eat cheese, bread, and fruit. Claude is angry, disappointed and dejected. He tells me that the French company Elf has just signed a deal with the Congolese state. A good deal for France, a bad deal for Congo. In the agreement, one had agreed to share the profits equally 50/50. “But we are in control,” says Claude, “we determine the costs and will ensure that we never achieve any profits. Everything will end up outside this country.”

It has been 36 years since Mobutu played Pontius Pilatus. 34 years since I had a lesson in neo-colonialism. During these years, I have actively participated in an international club that has loudly and clearly spoken about the need for human rights and democracy, the need for everyone’s free vote. A club that at the same time has made harmonized power discharge permanent. When Mobutu left, he had five billion dollars on his accounts. The accounts had been filled while we together fought Communism.

2011. Mubarak leaves Cairo. 30 years in power. He promised us stability and to fight Islamism. Our relationship with Mubarak is like a blueprint of Mobutu. Just before Mubarak is forced away by his own people, we in the West still sing the refrain of “stability.” As soon as he leaves, his palace, his accounts are strangled in Switzerland. He who “created” stability is now called the Tyrant. He who received billions of dollars from the West to combat Islamists no longer receives any blood money. We wash our hands. We meet in Paris, Davos, or why not Stockholm. We are just as harmonized when we support the tyrant as when we overturn him.