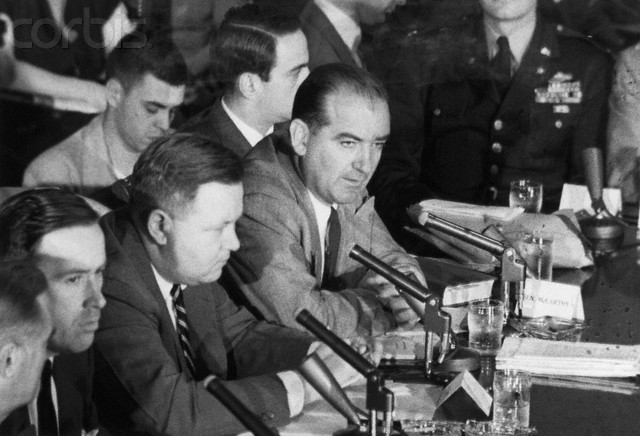 Half a century ago, during the late Senator Joseph McCarthy-fueled “great red’ scare” that terrorized many in America, my kindergarten teacher at Milwaukie Grammar School in Oregon, Miss Kidd, used to instruct our class of five- and six-year-olds how to prepare for the coming Atomic bomb attack from the communists in the Soviet Union, who, she explained, “did not like our freedom and wanted to kill all Americans.”

As I recall, the twice weekly A-bomb practice sessions were actually sort of fun. Complete with squealing and sometimes trembling, pants wetting or crying classmates dropping to the floor as Miss Kidd, right in the middle of reading us a nice story like “Life on the Prairie”,  from her chair in front of the class, would pause, remove her glasses, look toward the windows, slap shut the storybook on her lap, and shout “down!”

We approximately 25 or so tykes would scramble to take out the white sheet from our desks (it had to be white, Miss Kidd told us, in order to reflect the ‘uranium radiation’ off of us — some of us told our Moms not to give us colored sheets or we might die). We would quickly lie down on the floor under the protection of the desk and facing away from the windows from which Miss Kidd told us glass would fly when the blast occurred and the mushroom cloud arrived over our nearby playground. We were to lay quiet, without even saying goodbye to our friends, until Miss Kidd would motherly intone: “All is clear!” as she resumed the story after we folded up our sheets and came to order with hands folded together on our desk tops.

When I asked my Franklin Roosevelt-devoted new-dealer dad (hence my prenom)  why we did not practice for the coming Atomic bomb at home, he would say not to worry son, it’s  just a Republican trick to scare us. After my dad’s comforting words, I never did worry much about the ‘Red menace’ or the soon to follow ‘Yellow menace’ of the Vietnam era, the Black Power menace, the illegal immigrant menace, or the current menace du jour, the great “Islamic Terrorist menace.”

I have no idea what Republican Congressman Peter King’s dad told him, but it was apparently something I was never told.

What is wrong with King’s Muslim scare hearings on “The Extent of Radicalization in the American Muslim Community and That Community’s Response” (he plans more every couple of months) is what was wrong with McCarthy’s House Un-American Activities Committee (HUAC) hearings in the 1950’s, and that is they constitute an irresponsible overgeneralization under which patriotic Americans were irrationally targeted as state enemies.

Peter King, as with Sarah Palin and Mike Huckabee, among others, habitually grovels to Israel as he seeks higher office, and his witch hunting “Muslim Terrorism” hearings suit the Israeli lobby just fine.  Majority Leader Eric Cantor (R-VA), the highest-ranking Jewish member of Congress, is squarely behind King as he receives strong criticism from civil libertarians and religious groups over his decision to target one group in his “fact finding investigation.”

Frankly, King is widely believed to have reached his conclusions long before he decided on holding a Congressional hearing. From a House committee room near King’s, Cantor is urging these days a near cut off of all American foreign aid except to Israel, for whom he has pledged to preserve the $8 million dollar per day — every day of the year — of borrowed US taxpayer money that most Americans do not realize is gifted to the occupiers of Palestine.

King comes across as a prejudiced lawmaker determined to demonize American Muslims as violent radicals. At a time when the U.S. needs the goodwill of domestic Muslim communities to safeguard homeland security, King is reinforcing fear and lack of trust and while potentially weakening mutual respect among Americans.

King has a long history of Islamophobic diatribes and he recently told the newly formed Manhattan Government Relations Committee of UJA-Federation of New York, about the need for constant vigilance to guard against the threat of Islamic terrorism worldwide.

The threat is real,” he said. “We can’t protect everyone everywhere, so we should go where the greatest threat is”, as he explained that his priority would be to make sure that security grants are allocated to those chosen and with the greatest need, including his state of  New York and Jewish groups.

King consistently misrepresents the facts. As Middle East specialist Mohamed Khodr instructs us, between 1980 and 2005, according to FBI statistics, less than six percent of terrorist incidents during this fifteen year period were committed by Muslims, while 94% were committed by non-Muslims. Moreover, 23 of the 24 recorded terrorist incidents (2002-2005) were carried out by domestic terrorists. The FBI claims that of the 83 terrorist attacks in the United States between 9/11 and the end of 2009, only three were clearly connected with the jihadist cause (3.6% of the total).

According to the FBI, with the exception of a white supremacist’s firebombing of a synagogue in Oklahoma City, all of the domestic terrorist incidents were committed by special interest extremists active in the animal rights and environmental movements.

In the face of this research, King still insists that 85 percent of American mosques have “extremist leadership” are “the enemy within” and that ordinary American Muslims are not opposed to terrorism. Yet a 2004 survey of mosque congregations in greater Detroit conducted by the Institute for Social Policy and Understanding found that the vast majority of mosque participants shun extremist views (92 percent) and are virtually unanimous (93 percent) in supporting community service and political involvement. Terrorists tend to hatch their plots via the Internet not in Mosques.

King’s “Muslim Terrorism” hearings are the first and hopefully the last of its kind to focus on a single religious group.  His false assumptions are being roundly rejected across America and Europe. Counterterrorism experts, veteran’s organizations, interfaith leaders, local leaders and editorial boards, and, most importantly, the American public are rejecting King’s racist calumny.

The reason is that his team’s hateful and reprehensible project represents the wrong approach to homeland security, arguably violates the First Amendment to the US Constitution which enjoins singling out a particular religion and the growing realization that his crusade is actually harmful to America’s anti-terrorism efforts both at home and abroad.