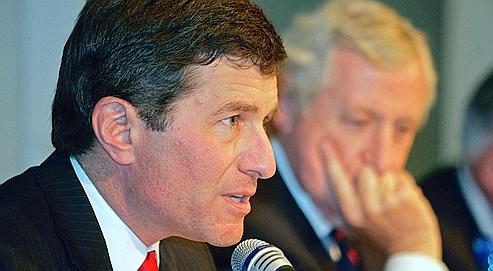 During October 19-22, 2010, Charles Rivkin, US Ambassador to France, invited a 29-member delegation from the Pacific Council on International Policy (PCIP) to a conference in France, the stated purpose of which was to discuss Arab and Islamic relations in the country.[1] The meeting was part of a far-reaching subversive agenda to transform that entire character of France and in particular the consciousness of French youth, which includes the use of France’s Muslim youth in a typically manipulative globalist strategy behind the usual façade of “human rights” and “equality.”

Globalist Delegation at US Embassy

The PCIP report states of the conference:

…The delegation further focused on three key themes. First, the group examined Franco-Muslim issues in France through exchanges with Dr. Bassma Kodmani, Director of the Arab Reform Institute, and Ms. Rachida Dati, the first female French cabinet member of North African origin and current Mayor of the 7th Arrondissement in Paris. A trip to the Grand Mosque of Paris and a meeting with the Director of Theology and the Rector there provided additional insight. Second, meetings with Mr. Jean-Noel Poirier, the Vice President of External Affairs at AREVA (a highly innovative French energy company), and with Mr. Brice Lalonde, climate negotiator and former Minister of the Environment, highlighted energy and nuclear policy issues and the differences between U.S. and French policies in these arenas. And finally, the delegation explored the connections between media and culture in California (Hollywood) and France in meetings at the Louvre, the Musee D’Orsay, and at FRANCE 24 – the Paris-based international news and current affairs channel.[2]

The over-riding concern seems to have been on matters of a multicultural dimension, including not only Arab and Islamic relations in France, but perhaps more importantly in the long term, a discussion on the impact of Hollywood “culture” on the French.

The USA has long played a duplicitous game of “fighting terrorism” of an “Islamic” nature as one of the primary elements of its post-Cold War stratagem of manufactured permanent crises, while using “radical Islam” for it own purposes, the well-known examples being: (1) supporting Bin Laden in the war against Russia in Afghanistan; (2) backing Saddam Hussein in the war against Iran; (3) supporting the Kosovo Liberation Army in ousting the Serbs from mineral-rich Kosovo, the KLA having been miraculously transformed from being listed by the US State Department as a “terrorist organization,” to becoming “freedom fighters.”

When US globalists pose as friends of Muslims, the latter should sup with the Great Shaitan with an exceedingly long spoon.

The PCIP, of which Rivkin is a member, was founded in 1995 as a regional appendage of the omnipresent globalist think tank, the Council on Foreign Relations (CFR),[3] It is headquartered in Los Angeles, but “with members and activities throughout the West Coast of the United States and internationally.” Corporate funding comes from, among others:

The PCIP is therefore yet another big player in the globalist network comprising hundreds of interconnected organizations, lobbies, “civil society” groups, NGOs, and think tanks, associated the US Government, and with banks and other corporations. As usual, there is a conspicuous presence by Rockefeller interests, and the interesting character, Nicky Rockefeller, is a member, despite the insistence of some “skeptics” that he doesn’t actually exist.

France has long been a thorn in the side of US globalism because of its stubborn adherence to French interests around the world, rather than those of the manufactured “world community.” Despite Sarkozy, France is one of the few states left in Western Europe with the remnant of a national consciousness. The best way of destroying any such sentiment is to weaken the concepts of nationhood and nationality by means of promoting “multiculturalism.” Was it only a coincidence that the 1968 student revolt, sparked by the most puerile of reasons, occurred at a time both when the CIA was very active in funding student groups around the world, and when President De Gaulle was giving the USA a lot of trouble? De Gaulle did little to play along with American’s post-war plans. He withdrew France from NATO military command. Even during World War II as leader of the Free French, he was distrusted by the USA.[5] Of particular concern would have been De Gaulle’s advocacy of a united Europe to counteract US hegemony.[6] In 1959 he stated at Strasbourg: “Yes, it is Europe, from the Atlantic to the Urals, it is the whole of Europe, that will decide the destiny of the world.” The expression implied détente between a future neutralist Europe and the USSR. In 1967 he declared an arms embargo on Israel and cultivated the Arab world. This is the type of statesmanship that globalists fear. With the buffoonery of Sarkozy, and mounting tension with disaffected Muslim youth, a backlash could see an intransigently anti-globalist, “xenophobic” regime come to power. In today’s context, what better way now to subvert French nationalism and head-off any potential to revive as an anti-globalist force, than to use France’s large, unassimilated Islamic component, just as the Bolshevik revolution was undertaken to a significant extent by the disaffected minorities of the Russian Empire?

Of interest also is the interest of the PCIP delegation in the influence of Hollywood on French culture. This might seem at first glance to be an odd concern. However Hollywood, as the symbol of international cultural excrescence, is an important factor in globalization, in what amounts to a world culture-war. Ultimately the goal of globalism is not to promote the survival of ethnic cultures and identities, but rather to submerge them into one big melting pot of global consumerism, to uproot every individual from an identity and heritage and replace that with the global shopping mall, and the “global village.” Therefore multiculturalism should be viewed as the antithesis of what it is understood as being. So far from the global corporates wanting to promote so-called multiculturalism in terms of assuring the existence of a multiplicity of cultures, as the term implies; it is to the contrary part of a dialectical process whereby under the facade of humane ideals, peoples of vastly different heritage are moved across the world like pawns on a chess board. It is an example of Orwellian “doublethink.”[7] It is notable that the instigators of the “velvet revolutions” now sweeping North Africa and reaching into Iran are largely “secularized” youths without strong traditional roots. Similarly, the best way to solve France’s ethnic conflicts and to assure that France does not re-emerge again to confront US/globalist interests, is to dialectically create a new cultural synthesis where there is neither a French culture nor an Islamic culture, but under the banner of “human rights” and “equality,” a globalist youth-based culture nurtured by Hollywood, MTV, cyberspace, MacDonald’s and Pepsi. That this is more than hypothesis is indicated in the manner by which the secular youth revolts now taking place in North Africa have been spawned by an alliance of corporate interests, sponsored by the US State Department and sundry NGOs such as Freedom House.[8] The North African “revolutionaries” are just the type of “Muslim” that the globalists prefer; spawned and nurtured with the cyber-consumer mentality.

So what are Rivkin and the US State Department up to in France, that they should be so interested in the place of Hollywood and of Muslims in the country?