A Neoconservative ‘Shock and Awe’: The Rise of the Arabs 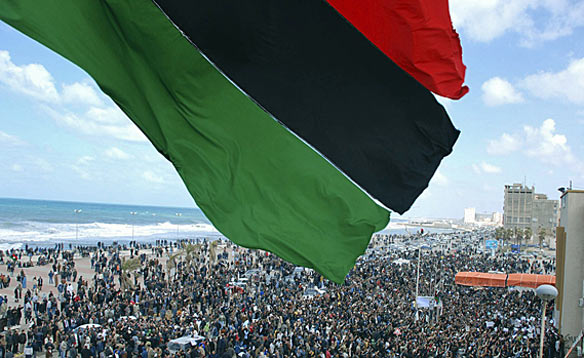 A pervading sense of awe seems to be engulfing Arab societies everywhere. What is underway in the Arab world is greater than simply revolution in a political or economic sense – it is, in fact, shifting the very self-definition of what it means to be Arab, both individually and collectively.

Hollywood has long caricatured and humiliated Arabs. American foreign policy in the Middle East has been aided by simplistic, degrading, and at times racist depictions of Arabs in the mass media. A whole generation of pseudo-intellectuals have built their careers on the notion that they have a key understanding of Arabs and the seemingly predictable pattern of their behavior.

Now we see Libya – a society that had nothing by way of a civil society and which was under a protracted stage of siege – literally making history. The collective strength displayed by Libyan society is awe-inspiring to say the least. Equally praiseworthy is the way in which Libyans have responded to growing dangers and challenges. But most important is the spontaneous nature of their actions. Diplomatic efforts, political organization, structured revolutionary efforts and media outreach simply followed the path and demands of the people. Libyans led the fight, and everyone else either obliged or played the role of spectator.

There is something new and fascinating underway here – a phenomena of popular action that renders any historical comparisons inadequate. Western stereotypes have long served an important (and often violent) purpose: reducing the Arab, while propping up Israeli, British and American invasions in the name of ‘democracy’, ‘freedom’ and ‘liberation’. Those who held the ‘torch of civilization’ and allegedly commanded uncontested moral superiority gave themselves unhindered access to the lands of the Arabs, their resources, their history, and, most of all, their very dignity.

Yet those who chartered the prejudiced discourses, defining the Arabs to suit their colonial objectives – from Napoleon Bonaparte to George W. Bush – only showed themselves to be bad students of history. They tailored historical narratives to meet their own designs, always casting themselves as the liberators and saviors of all good things, civilization and democracy notwithstanding. In actual fact, they practiced the very opposite of what they preached, wreaking havoc, delaying reforms, co-opting democracy, and consistently leaving behind a trail of blood and destruction.

In the 1920s, Britain sliced up, then recomposed Iraq territorially and demographically to suit specific political and economic agenda. Oil wells were drilled in Kirkuk and Baghdad, then Mosul and Basra. Iraq’s cultural uniqueness was merely an opportunity to divide and conquer. Britain played out the ethno-religious-tribal mix to the point of mastery. But Arabs in Iraq rebelled repeatedly and Britain reacted the way it would to an army in a battle field. The Iraqi blood ran deep until the revolution of 1958, when the people obtained freedom from puppet kings and British colonizers. In 2003, British battalions returned carrying even deadlier arms and more dehumanizing discourses, imposing themselves as the new rulers of Iraq, with the US leading the way.

Palestinians – as Arabs from other societies – were not far behind in terms of their ability to mobilize around a decided and highly progressive political platform. Indeed, Palestine experienced its first open rebellion against the Zionist colonial drive in the country, and the complacent British role in espousing it and laboring to ensure its success decades ago (well before Facebook and Twitter made it to the revolutionary Arab scene). In April 1936, all five Palestinian political parties joined under the umbrella of the Arab Higher Committee (AHC), led by Haj Amin al-Husseini. One of the AHC’s first decisions was to assemble National Committees throughout Palestine. In May, al-Husseini summoned the first conference of the National Committees in Jerusalem, which collectively declared a general strike on May 8, 1936. The first joint Palestinian action to protest the Zionist-British designs in Palestine was non-violent. Employing means of civil disobedience, the 1936 uprising aimed to send a stern message to the British government that Palestinians were nationally unified and capable of acting as an assertive, self-assured society. The British administration in Palestine had thus far discounted the Palestinian demand for independence and paid little attention to their incessant complaints about the rising menace of Zionism and its colonial project.

Palestinian fury turned violent when the British government resorted to mass repression. It had wanted to send a message to Palestinians that her Majesty’s Government would not be intimidated by what it saw as insignificant fellahin, or peasants. The first six months of the uprising, which lasted under different manifestations and phases for three years, was characterized at the outset by a widely observed general strike which lasted from May to October 1936. Palestine was simply shut down in response to the call of the National Committees and al-Husseini. This irked the British, who saw the “non-Jewish residents of Palestine” as deplorable, troublesome peasants with untamed leadership. Within a few years, Palestinians managed to challenge the conventional wisdom of the British, whose narrow Orientalist grasp on the Arabs as lesser beings with fewer or no rights – a model to be borrowed later on by the Zionists and Israeli officials – left them unqualified to ponder any other response to a legitimate uprising than coercive measures.

The price of revolution is always very high. Then, thousands of Palestinians were killed. Today, Libyans are falling in intolerable numbers. But freedom is sweet and several generations of Arabs have demonstrated willingness to pay the high price it demands.

Arab society – whether the strikers of Palestine in 1936, the rebels of Baghdad of 1958, or the revolutionaries of Libya, Tunisia and Egypt of 2011 – remain, in a sense, unchanged, as determined as ever win freedom, equality and democracy. And their tormenters also remain unhinged, using the same language of political manipulation and brutal military tactics.

The studious neoconservatives at the Foreign Policy Initiative and elsewhere must be experiencing an intellectual ‘shock and awe’, even as they continue in their quest to control the wealth and destiny of Arabs. Arab societies, however, have risen with a unified call for freedom. And the call is now too strong to be muted.