Stealing from Social Security to Pay for Wars and Bailouts 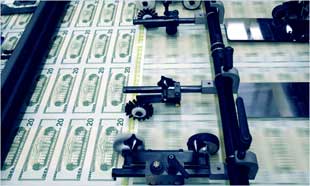 The American Empire is failing. A number of its puppet rulers are being overthrown by popular protests, and the almighty dollar will not even buy one Swiss franc, one Canadian dollar, or one Australian dollar. Despite the sovereign debt problem that threatens E.U. members Greece, Ireland, Spain, and Portugal, it requires $1.38 dollars to buy one euro, a new currency that was issued at parity with the US dollar.

The U.S. dollar’s value is likely to fall further in terms of other currencies, because nothing is being done about the US budget and trade deficits. Obama’s budget, if passed, doesn’t reduce the deficit over the next ten years by enough to cover the projected deficit in the FY 2012 budget.

Indeed, the deficits are likely to be substantially larger than forecast.  The military/security complex, about which President Eisenhower warned Americans a half century ago, is more powerful than ever and shows no inclination to halt the wars for U.S. hegemony.

The cost of these wars is enormous.  The U.S. media, being good servants for the government, only reports the out-of-pocket or current cost of the wars, which is only about one-third of the real cost. The current cost leaves out the cost of life-long care for the wounded and maimed, the cost of life-long military pensions of those who fought in the wars, the replacement costs of the destroyed equipment, the opportunity cost of the resources wasted in war, and other costs. The true cost of America’s illegal Iraq invasion, which was based entirely on lies, fabrications and deceptions, is at least $3,000 billion according to economist Joseph Stiglitz and budget expert Linda Bilmes.

The same for the Afghan war, which is ongoing.  If the Afghan war lasts as long as the Pentagon says it needs to, the cost will be a multiple of the cost of the Iraq war.

There is not enough non-military discretionary spending in the budget to cover the cost of the wars even if every dollar is cut. As long as the $1,200 billion ($1.2 trillion) annual budget for the military/security complex is off limits, nothing can be done about the U.S. budget deficit except to renege on obligations to the elderly, confiscate private assets, or print enough money to inflate away all debts.

The other great contribution to the U.S. deficit is the offshoring of production for U.S. markets.  This practice has enriched corporate management, large shareholders, and Wall Street, but it has eroded the tax base, and thereby tax collections, of local, state, and federal government, halted the growth of real income for everyone but the rich, and disrupted the lives of those Americans whose jobs were sent abroad.  When short-term and long-term discouraged workers are added to the U3 measure of unemployment, the U.S. has an unemployment rate of 22%.  A country with more than one-fourth of its work force unemployed has a shrunken tax base and feeble consumer purchasing power.

To put it bluntly, the $3 trillion cost of the Iraq war, as computed by Joseph Stiglitz and Linda Bilmes, is 20% of the size of the U.S. economy in 2010. In other words, the Iraq war alone cost Americans one-fifth of the year’s gross domestic product.  Instead of investing the resources, which would have produced income and jobs growth and solvency for state and local governments, the U.S. government wasted the equivalent of 20% of the production of the economy in 2010 in blowing up infrastructure and people in foreign lands.  The U.S. government spent a huge sum of money committing war crimes, while millions of Americans were thrown out of their jobs and foreclosed out of their homes.

The bought-and-paid-for Congress had no qualms about unlimited funding for war, but used the resulting “debt crisis” to refuse help to American citizens who were out of work and out of their homes.

The obvious conclusion is that “our” government does not represent us.

The U.S. government remains a champion of offshoring, which it calls “globalism.”  According to the U.S. government and its shills among “free market” economists, destroying American manufacturing and the tax bases of cities, states, and the federal government by moving U.S. jobs and GDP offshore is “good for the economy.” It is “free trade.”

It is the same sort of “good” that the U.S. government brings to Iraq and Afghanistan by invading those countries and destroying lives, homes and infrastructures.  Destruction is good.  That’s the way our government and its shills see things. In America destruction is done with jobs offshoring, financial deregulation, and fraudulent financial instruments. In Iraq and Afghanistan (and now Pakistan) is it done with bombs and drones.

Where is all this leading?

It is leading to the destruction of Social Security and Medicare.

Republicans have convinced a large percentage of voters that America is in trouble, not because it wastes 20% of the annual budget on wars of aggression and Homeland Security porn-scanners, but because of the poor and retirees.

Niall Ferguson thinks that Americans are so addicted to wars that the U.S. government will default on Social Security and Medicare.

Republicans tell us that our grandchildren are being saddled with impossible debt burdens because of handouts to retirees and the poor. $3 trillion wars are necessary and have nothing to do with the growth of the public debt. The public debt is due to unnecessary “welfare” that workers paid for with a 15% payroll tax.

America can be strong again once we get rid of these welfare leeches.

Once we are rid of these leeches, we can really fight wars. And show people who is boss.

Republicans regard Social Security as an “unfunded liability,” that is, a giveaway that is interfering with our war-making ability.

Alas, Social Security is an unfunded liability, because all the money working people put into it was stolen by Republicans and Democrats in order to pay for wars and bailouts for mega-rich bankers like Goldman Sachs.

What I am about to tell you might come as a shock, but it is the absolute truth, which you can verify for yourself by going online to the government’s annual OASDI and HI reports.  According to the official 2010 Social Security reports, between 1984 and 2009 the American people contributed $2 trillion, that is $2,000 billion, more to Social Security and Medicare in payroll taxes than was paid out in benefits.

The government spent it.

Over the past quarter century, $2 trillion in Social Security and Medicare revenues have been used to finance wars and pork-barrel projects of the US government.

Depending on assumptions about population growth, income growth and other factors, Social Security continues to be in the black until after 2025 or 2035 under the “high cost” and “intermediate” assumptions and the current payroll tax rate of 15.3% based on the revenues paid in and the interest on those surplus revenues. Under the low cost scenario, Social Security (OASDI) will have produced surplus revenues of $31.6 trillion by 2085.

When I was Assistant Secretary of the U.S. Treasury, Deputy Assistant Secretary Steve Entin worked out a way to put Social Security on a sound basis with the current rate of payroll tax without requiring one cent of general revenues.  You can read about it in chapter 9 of my book, The Supply-Side Revolution, which Harvard University Press has kept in print for more than a quarter century.  Entin’s solution, or a variation of it, would still work, so Social Security can easily be saved within the current payroll tax rate. Instead of acknowledging this incontrovertible fact, the right-wing wants to terminate the program.

Treasury was blocked from putting Entin’s plan into effect by the fact that other parts of the government and the Greenspan Social Security Commission had agendas different from ensuring a sound Social Security system.

Nevertheless, the Greenspan commission played to these mistaken fears.  The “Reagan deficits” could not cause inflation, because they were the result of the unanticipated collapse of inflation (anticipated only by supply-side economists). As I demonstrated in a paper published in the 1980s in the U.S., U.K., Japan, Germany, Italy, and other countries, tax revenues were below the forecast amounts because inflation, and thus nominal GNP, were below forecast. The collapse of inflation also made real government spending higher than intended as the spending figures in the five-year budget were based on higher inflation than was realized.

The money left over for war would be even smaller. More would have to be borrowed or printed.

The difference between the $2 trillion in excess Social Security revenues and the $2.8 trillion figure is the $0.8 trillion that is the accumulated interest over the years on the mounting $2 trillion in debt, if the Treasury had had to issue bonds, instead of non-marketable IOUs, to the Social Security Trust Fund. When the budget is in deficit, the Treasury pays interest by issuing new bonds in the amount of the interest due. In other words, the interest on the debt adds to the debt outstanding.

The robbed Social Security Trust Fund can only be made good by the U.S. Treasury issuing another $2.8 trillion in U.S. government debt to pay off its IOUs to the fund.

When a government is faced with a $14 trillion public debt growing by trillion dollar deficits as far as the eye can see, how does it add another $2.8 trillion to the mix?

Only with great difficulty.

Therefore, to avoid repaying the $2.8 trillion that the government has stolen for its wars and bailouts for mega-rich bankers, the right-wing has selected entitlements as the sacrificial lamb.

A government that runs a deficit too large to finance by borrowing will print money as long as it can.  When the printing press begins to push up inflation and push down the exchange value of the dollar, the government will be tempted to reduce its debt by reneging on entitlements or by confiscating private assets such as pension funds. When it has confiscated private assets and reneged on public obligations, nothing is left but the printing press.

We owe the end-time situation that we face to open-ended wars and to an unregulated financial system concentrated in a few hands that produces financial crises by leveraging debt to irresponsible levels.