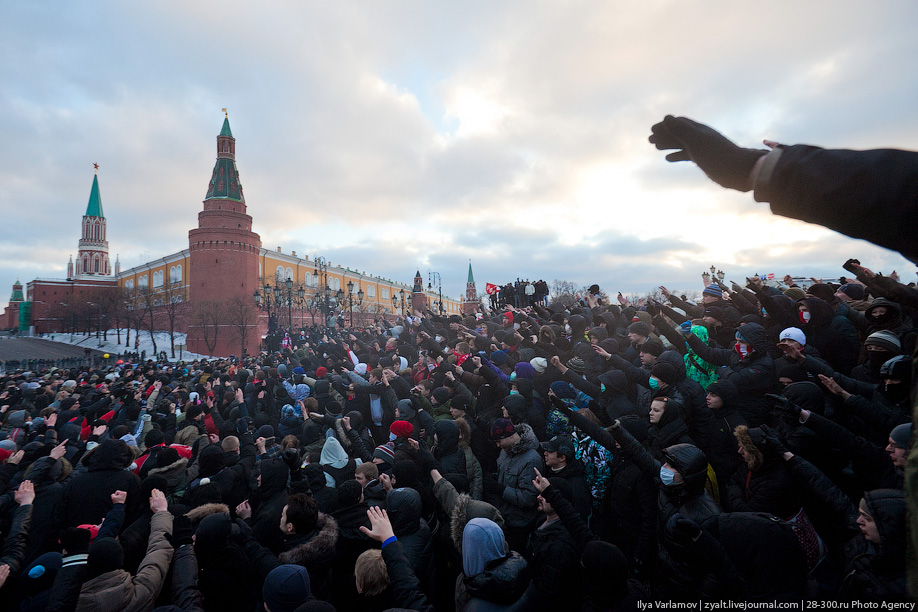 Since coming to power in 1999, Vladimir Putin has purposefully instrumentalized Russian imperial nostalgia, national pride and ethnocentric thinking for the legitimization of his authoritarian regime. The repercussions of this strategy are becoming a threat to the integrity of the Russian state, in the 21st century

For several days now, Russia has been haunted by nationalistic demonstrations, violent ethnic brawls, and resulting mass arrests. The series of interrelated events was triggered by the death of a Russian soccer fan in a scuffle between ethnic Russian and north Caucasian youth in Moscow, on 6 December 2010. International media has focused on the following violent clash between neo-Nazi demonstrators, on the one side, and Russian policemen, on the other, on Manezh Square, in the Moscow city center, on 11 December 2010, as well as on some subsequent clashes in the Russian capital. There were several other, less spectacular, but also massive Russian nationalist public gatherings before this confrontation in Moscow as well as more in other cities including Rostov-on-the-Don and St. Petersburg. 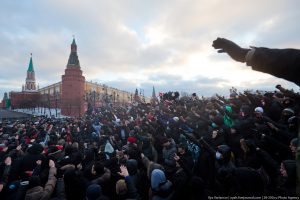 In fact, these news-making events are merely the latest episodes in a story that – often unnoticed outside and concealed inside Russia – has been developing over several years now. The Moscow SOVA (Owl) Center for Information and Analysis, Russia’s leading xenophobia monitoring NGO, has been closely watching the multifarious Russian ultra-nationalist scene since the middle of this decade. According to SOVA, in 2004-2009, Russian racists killed on average between one and two persons per week – a death rate that has no equivalent, in any comparable country. The peak of the violent campaign was reached in 2008 when SOVA reported 114 deadly hate crimes as well as 497 cases of serious injuries – most of them committed by young russocentric skinheads.

To be sure, the number of grave hate crimes (heavy health damages, murders) recorded by SOVA has decreased in 2009-2010 as a result of the increasingly harsh measures of the Russian state against neo-Nazi youth groups during the last couple of years. Yet, as the events of last week illustrate, the Russian state’s recent resoluteness in persecuting racist murders has had so far little effect on the overall spread of ultra-nationalism in Russian society, in general, and Russia’s male youth, in particular. (It also needs to be noted that SOVA has a conservative approach to counting xenophobic offenses and is cautious to qualify a certain misdemeanor or murder as a hate crime. Moreover, many, if not most xenophobic assaults are, because of the bad reputation of the Russian law enforcement agencies, probably never reported to the police. It is thus likely that the real numbers for the various ultra-nationalist transgressions, listed in the below table, is higher – perhaps, much higher – than it has been possible to record for SOVA.)

Moscow SOVA Center for Information and Analysis: Number of violent racist and neo-Nazi attacks (killings and beatings/heavy injuries) in the Russian Federation from 1 January 2004 until 1 July 2010

Neither the Russian nor the Western public have so far become fully aware of the magnitude of Russia’s neo-fascist subculture. Meanwhile, the embassies of Asian and African countries in Moscow have been struggling to deal with the problem that, each year, dozens of their nationals are insulted, harassed, attacked, injured, as well as sometimes killed in Russia because of their skin color. In March of this year, the South Korean Ministry of Foreign Affairs took the unusual step to issue an official recommendation not to visit the Russian Federation because there had been several assaults on Korean citizens, in the preceding months.

Especially during the last decade, Russia has been presenting itself, on the international scene and in her national mass media, as the prime defeater of fascism. Yet, among foreign students, guest workers and migrants who come to visit or to live in Russia as well as among Russian citizens with a “non-Slavic” appearance, the country has acquired a strange reputation. Russian officials and mass media have been missing no opportunity to berate neighboring countries such as Estonia and Ukraine for their alleged support of “fascist” tendencies. Mostly, these allegations concerned some post-Soviet governments’ permissiveness towards reunions of veterans who had collaborated with the Nazis and fought with the SS and Wehrmacht against the Red Army during World War II.

Incongruously, at the same time, Russia’s authorities have been ignoring, misunderstanding or/and misinterpreting far more serious trends in various sectors of their own society. Racially motivated hate crimes are frequently presented as outcomes of mere “youth hooliganism” while the manifestly neo-Nazi skinhead mass movement has, until recently, often been dismissed as a marginal phenomenon. In fact, the overwhelmingly ultra-nationalist Russian skinhead movement has been estimated to have between 20 and 70 thousand members – depending on the definition of such membership. This would seem to make the Russian skinheads the largest informal, openly neo-Neonazi youth movement in the world.

Reflecting the degree of delusion among relevant Russian officials about what is actually going on in their country, government-controlled mass media has initially been trying to interpret the last events in Moscow as a result of football fanaticism, an allegation strongly rejected by the relevant soccer fan clubs of the Russian capital. In a further surrealistic turn, Russia’s Minister of Interior Rashid Nurgaliev classified the instigators of the Moscow city center race riot on 11 December as “left-wing radicals.”

The apparent uneasiness of the Russian authorities to deal with the rising ultra-nationalist tendencies in their country has an obvious reason: A more moderate and subtle, though hardly less manifest form of nationalist xenophobia has been a – if not the – major legitimizing code of Russia’s neo-authoritarianism during the last ten years. Manifest bellicism and frank law-and-order rhetoric was the ticket that made Putin popular as Boris Yeltsin’s last prime-minister in 1999. In August 1999, it was essentially Putin who started the Second Chechen War. In September of that year, a number of apartment bombings in Moscow and elsewhere, by supposedly Caucasian terrorists, lead to a further escalation in Russian-Caucasian relations. Within weeks, Putin’s popularity skyrocketed as he was seen as the right man to secure the safety of Russia’s citizens from separatist fanatics and religious fundamentalists in the country’s instable south. The Caucasophobic frenzy and climate of insecurity within the Russian population in the second half of 1999 were important determinants in the election of the previously unknown former KGB officer to President of Russia in spring 2000.

In November 2010, the strange aftertaste of this breathtaking turnaround in Russian politics was further increased with the release into public of Dr. Yurii Felshtinsky’s documentary “Blowing Up Russia.” Now freely available on the New York Russian-language site RUNYweb.com, this carefully researched historical documentation provides stunning footage and several authentic interviews with eyewitnesses of the terrorist events in 1999. This evidence suggests that the Russian security service may have either been directly involved in, or become ready to use as a model, the 1999 apartment bombings.

Whatever really happened in Russia in September 1999, the nature of the political trends that took their beginning in the anti-Caucasian hysteria of that autumn are hardly disputable. Since then, Russian public discourse – whether in mass media, party politics, academia or other social spheres – has become more and more characterized by an isolationist, ethnocentric, and manichean view of the world. Within this mode of thought, the Russians appear as an insufficiently respected, but heroic ethnic collective that has been cheated into its current national borders by cunning Western governments, treacherous Russian liberals, and the unthankful national elites of the former Soviet Union. In the New Brave World of Vladimir Putin, it has become a compliment to be labeled a Russian “nationalist” (in the “good sense of the word”), and a commonplace to defame those critical of Soviet history or Putin’s rule as “agents” of foreign powers, notorious “Russophobes,” or even “fascists.”

The Dialectics of Nationalist Political Campaigning

Many Russians today believe that their nation is surrounded or has been infiltrated by various aliens who are engaged in, or planning to, subvert the Russian national government, security, traditions and culture. Oddly, the most serious potential future threat to the Russian state and its borders, the increasingly nationalistic and powerful People’s Republic of China, is exempted from the various xenophobic campaigns of Russia’s government-controlled mass media.

The function of the ethnocentric agitation of the Russian leadership during the last ten years is obvious. If the Russian state is a fortress which has to protect the country’s national sovereignty, integrity and identity – then unfettered permission of civic freedoms, overly trustful relations with foreign countries, and uncontrolled pluralism of political opinion are dangerous luxury. A “sovereign democracy,” “dictatorship of the law,” and “vertical of power” – such are the labels that Putin and Co. have come up with during the last years –  are not only modes of government deeply rooted in Russian history. They are also badly need in the uncertain waters of post-Soviet national and international politics in order to secure the survival of Russia.

The peculiar dialectics of such a strategy are seemingly only now starting to get to the Russian leadership. While it is, in times of social crisis, easy to wake the genie of nationalism, it is difficult to control him once he is out of the bottle. As it becomes clearer with every year, Putin and his associates may have succeeded in consolidating their rule over the country today. At the same time, their manipulation of the national feelings and social anxieties of post-Soviet Russia’s crisis-stricken population has been a play with fire. Ironically, historians may one day come to the conclusion that it had not been the “enemies,” but the leaders of the Russian Federation who, with their risky political technologies, undermined the integrity of this newly independent state.