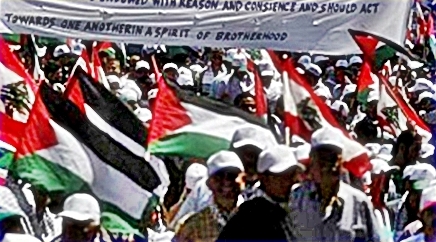 The European Union can redeem its charter and alleviate widespread suffering in Lebanon’s refugee camps.

The Palestine Civil Rights Campaign—Lebanon (PCRC) was organized in Washington DC and  Beirut, Lebanon in late 2009 with the goal of achieving, in concert with Lebanese  based NGOs,  the enactment in Lebanon’s parliament of two basic civil rights for more than 400,000 UNRWA registered Palestinians.  These are the basic civil rights to work and to own a home.

With a series of popular support efforts, including a civil rights march on parliament on 27 June 2010 and a series of informational and analytical reports distributed widely on the Internet and in hard copy, the PCRC continues to intensify its work.  Currently lobbying members of parliament, as well as pursuing several initiatives, including an International Petition which aims to collect one million signatures (it currently has 600,000 signatures from 105 countries), the PCRC in Lebanon pegs success on international and particularly European Union involvement.

During the spring-summer 1948 Nakba, 780,000 Palestinians—approximately 60 percent of the population of Palestine—were driven from their homes and ancestral lands.  Over a period of several months, approximately 121,000 refugees arrived along Lebanon’s southern border, trekking along ancient roads and footpaths or traveling by boat from beaches in Palestine. These Palestinians retained the hope and determination to return to their homeland. 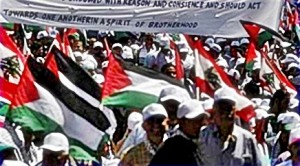 From which areas of Palestine did Lebanon’s uninvited and soon to be unwanted guests arrive? Approximately 29,500 rural dwellers and 8,500 urban dwellers escaped Zionist death squads and arrived to Lebanon by land and sea from Acre; 1,500 rural inhabitants and 7,200 urban dwellers arrived by boat from Haifa; 9,500 refugees came by land from Nazareth; and 6,900 urban dwellers and 4,000 rural dwellers came by boat from Jaffa. They came from among the 531 attacked and destroyed villages, victims of the quarter-century of meticulously planned ethnic cleansing projects A, B, C, and D (the infamous Plan Dalat)—Zionism’s final solution.

Many Lebanese, Arab, and international committees undertook the responsibility of sheltering the refugees and provided them with basic humanitarian services until the establishment of the United Nations Relief and Work Agency (UNRWA) in 1949. UNWRA started its mission in 1950. They first provided the refugees with tents, and then mud houses covered with reeds and straw mats, then one level zinc-roofed cinder block rooms and public bathrooms on main streets. Today it is common to find 5–7 persons forced to live in one room.

The United Nations and the government of Lebanon established 16 refugee camps between 1948 and 1955, of which 12 remain with close to 227,000 refugees tightly caged inside. Lebanon has the highest percentage of camp-dwelling refugees (approximately 53 percent) of all the countries hosting Palestinian refugees.

In addition to the 12 camps, more than 21,000 Palestinians refugees squat in 14 scattered ‘gatherings’ with essentially no infrastructure.

These refugees and their offspring account for more than 98 percent of Lebanon’s Palestinian refugees, of whom 426,000 are registered with UNRWA as of November 2010. In addition, there are approximately 5000 non ID Palestinians who arrived between 1967 and 1974.

Increasingly, Palestinian refugees in Lebanon face staggering problems. Contrary to the status of refugees in other countries, Lebanon’s unwanted guests are denied social, economic and civil rights, including the right to work or to own a home.  They have very limited access to the government’s public health or educational facilities and no access to public social services.

Recognition of the problem but still no solution

Unfortunately, the 17 August 2010 parliamentary amendments to article 59 of the Lebanese Labor Law of 23 September 1946 and paragraph 3 of Article 9 of the Lebanese Social Security Law issued on 26 September 1963 failed to address the elementary requirements of international law relating to refugees in Lebanon.  The amendments also failed to achieve parliament’s presumed legislative intent of granting employment rights for these victims of ethnic cleansing.

Preceding the parliamentary vote, which led to the abolition of work permit fees for menial jobs but retained the bar on Palestinians working in the more than five dozen professions and syndicated jobs, and continues the prohibition of home ownership, limited discussion was encouraged. The same false arguments from the past half century were bandied about, including unsubstantial claims that allowing refugees to work would interfere with their right to return to Palestine (resolution 194), take jobs from  Lebanese, and make the refugees too comfortable thus weakening their desire to return to Palestine.  The truth is, according to the international NGO community in Lebanon, that granting these internationally mandated rights, enjoyed by refugees around the world, will in fact fortify the Palestinians strong determination to refuse permanent settlement, displacement or dispersal.

The solution to the plight of Lebanon’s Palestinian refugees is to grant the population elementary civil rights, and it is increasingly evident that the international community must become involved in achieving this.

There also remains a dire need to increase the amount of land allocated for the refugees to live on.  The original area allocated to refugee camps has actually been diminished in size by the destruction of three camps (noted above), while the number of Palestinian refugees has increased more than 400 percent since 1948.

On 19 November 2010, the Palestine Civil Rights Campaign received a much appreciated communication and invitation from Pope Benedict XVI, responding to an October 2010 open letter to Pope Benedict XVI and Lebanon’s Patriarch, Nasrallah Sfeir.   The missive was an interim response from the Vatican to the growing international effort to enact civil rights for Palestinians in Lebanon, and it included an invitation for a delegation from Lebanon’s camp to attend for a private visit with His Holiness.  The missive also highlights the fact that the grave human rights problems of Palestinian refugees in Lebanon require immediate international intervention, support and assistance to the government of Lebanon as its works to meet its minimal international obligations.

As the Palestine Civil Rights Movement launches ‘Round Two’ of the struggle to secure civil rights for Palestinian refugees in Lebanon, international community involvement is essential, beginning with education among the European Union countries of the squalid conditions in Lebanon’s camps and EU solidarity with encouraging Lebanon’s parliament to fulfill its obligations and avoid a growing demand for international sanctions against Lebanon. Among actions being organized is the pending lawsuit in Washington DC to cut off all US aid to Lebanon as required under the 1961 US Foreign Assistance Act to countries, such as Lebanon, who engage in a pattern of denying civil rights to refugees.

For the European Union to champion this cause would be a win-win result for all involved.  The EU has the political and economic power to quickly achieve the enactment in Lebanon’s parliament of the two key goals that would alleviate much of the suffering of the refugees: the right to work and to own a home.  All countries which host Palestinian refugees, such as Jordan, Syria and EU member states clearly benefit from Palestinians refugees being allowed to work on the same basis as other refugees.

The European Union is uniquely positioned to quickly achieve civil rights for Palestinians in Lebanon given its economic and political involvement in human rights.  Sometimes, the EU is said to have abdicated some of its responsibilities and is accused of caving to US and Israeli objectives with respect to the Middle East.

Among EU efforts that are sought and being hoped for in Lebanon’s Palestinian camps are the following:

1. The EU should move into the vacuum that is quickly developing in the languid ‘peace process’ and offer its own leadership initiatives.  Clearly the Obama administration is struggling and would welcome EU support and an enhanced pro-active role.

2. The EU should immediately act to support the work of UNRWA, which provides, to the best of its limited capacity, health and educational assistance to the camps.  UNRWA will soon be the target of US Congressional Committees whose hostility toward the Palestinian refugee community is well-known.  The EU has a good record of helping UNRWA and should continue now by more publicly coming to its defense and helping with budget shortfalls.  This EU initiative will have an immediate positive impact inside Palestinian camps where UNRWA budget cuts have been sharply felt.

3. The EU should take  more public leadership positions such as the one expressed by former EU representatives this month with respect to blatantly illegal Israeli actions such as settlement building and the whole list of discriminatory and illegal government actions against the Arab population on both sides of the 1949 armistice line.

4. More EU presence in Lebanon’s 12 Palestinian camps in the form of educational, health, cultural and small business projects would markedly contribute to the refugees need for international solidarity and would help end the siege and abandonment anxieties growing inside the camps.  An urgent educational need is for volunteer teachers in UNRWA’s 79 schools.

5. The EU would significantly advance the Palestine Civil Rights Campaign in Lebanon  were it to send delegations to meet with local NGOs, visit the camp residents, and dialogue with members of parliament and political leaders to bring much needed international attention to this acute human rights crisis.

Were the European Union to lead the growing international effort to secure civil rights for Palestinians in Lebanon, it would be much to its credit. More importantly, it would alleviate much of the needless suffering of Palestinian refugees in Lebanon while simultaneously sending a message of hope to all Palestinians in the Diaspora. Hopefully the European Union will seize this opportunity and achieve the leadership position within the international community that has been its promise since it came into being.