Egypt: To Bequest a Country 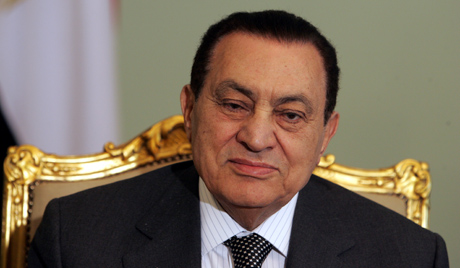 A “nation in anticipation” is an accurate portrayal of Egypt nowadays. Egypt’s octogenarian leader, who presided atop the country for decades, will soon depart the scene either of his own volition or due to incapacity and inevitable demise. As the aging president continued to convalesce after a surgery, serious concerns float to the surface about his ability to resume his responsibilities and fulfill his duties.

Mubarak’s health status has always been a taboo; a topic broached only with trepidation. This time, as he recuperated after removing a gall bladder and a benign growth, his condition is propelled to the forefront of the political debate. This is ineluctable in a country used to tie a knot with presidents “till death do us part.” Naturally, Egyptians remain glued to news of Mubarak’s ailment. The images of the recovering president have been broadcast in an attempt to tranquilize the public opinion. The media continued to hail him as the country’s security valve, and to applaud the astute president who paddled to the shore of safety in an era of turmoil.

These familiar endeavors, nonetheless, failed either to quell the people’s disquietude or to assuage their anxiety. At this time, the appearance of “business as usual” does not instill comfort as it once did. The recurrent relapses are poignant reminders that Mubarak is not immortal. That much is undeniable. What remains a matter of conjecture is who will follow in his footsteps. This thrusts the succession issue into the spotlight. The concern over future leadership in Egypt cannot be understated, especially that the impending events will have enormous ramifications that will extend beyond Egypt’s borders to an already turbulent region.

In times of upheaval, transparency inspires comfort while the lack thereof fuels apprehension and suspicions of intrigue. In Egypt, the transition procedure is supposed to be duly accounted for. Constitutional contingency provisions notwithstanding, there is avid ambiguity about the transfer of power in Egypt. The forthcoming parliamentary and presidential elections are taking place consecutively. The former is considered a prelude to the latter, as the presidential candidates are required to seek the approval of the majority of the members of the parliament.

Mubarak has not disclosed his intentions if he is seeking another term in the upcoming presidential elections. Even if he does, it is unlikely he will witness the end of his sixth term. Thus, the succession dilemma will persist.

The predicament is amplified by the fact that there is no successor in sight. Unlike his predecessors, Mubarak has been firmly reluctant to appoint a vice president. Confronting queries, he used to prevaricate that he does not intend to impose a successor of his own choosing; a stance that reflects a flair of deference to democracy and adherence to public will, met with incredulity considering a long record of disparagement to both. This time, the ensuing hand-over will not be reminiscent of past experiences when vice presidents prevailed postmortem. Sadat has been the vice president of Nasser, and Mubarak that of Sadat.

Not only that, but Mubarak never allowed public figures with popular appeal to thrive within the realm of politics. A flagrant example is that of Amr Moussa, a former foreign minister, who was jettisoned to the Arab League as his popularity became a source of unease. This attitude helped to foster an opinion that there is no political figure of comparable stature to Mubarak that stands out. The compelling argument was to ensure a reign without any semblance of rivalry.

This inconspicuous position left analysts and observers to scour for clues over the identity of the successor. For Egyptians, their destiny is usually determined behind closed doors. The typically circumscribed elections, where votes are marred with irregularities, are considered but a charade. Citizens usually watch from the sidelines and accept the preordained outcome. The majority has grown inured to having no say in the course of events, and they are left to follow the debate attentively as the predetermined outcome unfolds.

Uncertainty is, obviously, looming in the horizon. In these circumstances, rumors fill the void of information and Egypt is abuzz with rumors on the inheritance of power scenario. The rumors abound that Gamal Mubarak is being groomed to carry his father’s mantle. Neither the father nor Gamal acknowledge such a plan. Officials disavowed such insinuations, and dubbed any talk about the aspirations of the son as far-fetched. To placate public opinion, Mubarak vehemently tried, to little avail, to clamp the lid on speculations. But his actions have done little to invalidate the widely heralded opinion that the way is paved for his son. Despite emphatic official assertions to the contrary, all indications suggest that such a scenario is concocted and underway.

Observers contend that Mubarak has been consolidating his powers to orchestrate a hereditary scenario. For instance, the constitutional track is greased so that Gamal is able to slide smoothly into presidency. The latest constitutional amendments stipulate that only high ranking party leaders satisfying threshold requirements could contest elections. Thus, the stifling provisions preclude any one to mount a realistic bid without the backing of the ruling party. These convoluted and stringent requirements drastically diminish the potential pool of candidates. The fact that Gamal is one of few who satisfy the criteria is no coincidence. This renders the inheritance scenario more likely. If so, Mubarak would take Egypt down the path of inheritance of leadership already trod by other countries in the region.

Other evidence that corroborates such a scenario is the meteoric rise of the son in recent years. Gamal has enjoyed a high public profile. The consensus is that this is intended to preempt the criticism for not having sufficient experience when he eventually takes over. The coverage of his activities is becoming a daily occurrence. To burnish his credentials, the media tried to cultivate an image of him as a “man of the people” who cares about their welfare. To polish his portfolio, they cast him as the champion of the youth and an embodiment of their aspirations. To ensure a political vehicle for office, he threw all his weight in the ruling party. Heading the Policy Secretariat led him to become the de facto leader of the party. A handful of old guards were discarded of, and prominent party loyalists were unceremoniously pushed aside for his own satisfaction. The concomitant restructuring of the party, coupled with its invigoration, caused Gamal to become substantially influential.

Gamal’s position is evidently bolstered by virtue of his presence in the Presidential palace. The first lady is known to be prodding the president to yield power to the son. In this case, the father would step down and make sure the son strengthens his grip on power before he passes away. He is also widely seen as a conduit to the father, for he is deemed to have the greatest influence in the areas of economic policy. For all this, he is perceived to have significant policy making prerogatives. He has a say in the selection of the cabinet members, and he is behind any reshuffle of high ranking officials. To seek the approval of the United Sates, he was appointed to the US-Egypt President’s Council, led several high level delegations, and accompanied his father in his official visits to Washington.

However, Gamal’s ascendancy is far from a done deal. His detractors argue that Gamal’s unpopularity is his “Achilles’ heel”. The attempts to promote the common-man persona are not easy to swallow considering his privileged upbringing and indulgent background. He was always sheltered from the daily ordeals of the ordinary man. The fact that he cannot fall back on humble roots makes it unlikely to endear him to the public. His associations with unpopular businessmen have tarnished his reputation. His image was not left unscathed by the charges of corruption that hounded his entourage. In the public eye, he is enmeshed in the network of crony capitalists whose interests are preserved by being his protégés.

If popularity is of no consequence in this equation, there is another issue that is. Previous presidents all became head of state by virtue of their military background. Gamal’s lack of military pedigree poses a question over his prospects. This is a shortcoming in a country where every president has risen from the ranks of the armed forces. Even though Gamal has been assiduous in courting these circles, his civilian background may not allow him to win over all the top brass. Some argue that he can be eased into position while his father is still in charge, and the military will not object as long as it does not impact their perquisites.

Others speculated that Omar Suleiman, the head of the General Intelligence, may emerge as a contender. This ensures that the military is not entirely alienated. The regime began bringing him out of political obscurity, and permitting his photo to appear during his diplomatic shuttles. His unveiling to the public, with a status of a diplomat extraordinaire, raised eye brows. His handling key security and diplomatic issues suggests he carries significant weight in the political equation. But his age and the leaks on his illness, few years ago, raised concerns about his physical capacity and whether his role is only to set the scene for Gamal while reassuring the state’s security and intelligence organs.