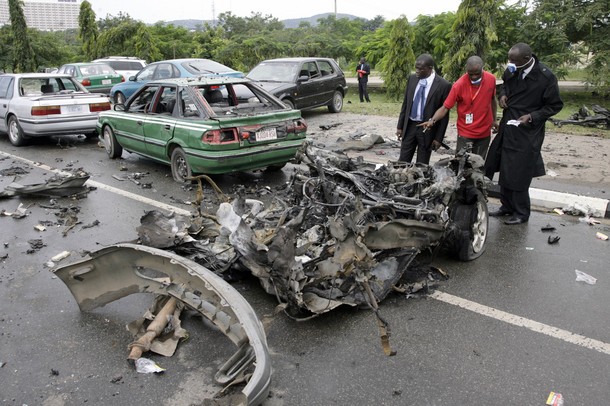 Who: The Nigerian militant group Movement for the Emancipation of the Niger Delta (MEND).

What: Independence day celebrations of Nigeria were marred when two car bomb explosions took place killing eight people and injuring three others. The Nigerian rebel group issued threats just an hour before the bombs detonated and asked people to evacuate the area by 10:30 (local time). Africa’s most populous nation is celebrating its 50th independence anniversary.

Where: The bombs went off not far from Eagle Square, where the Nigerian elite had gathered for the official celebrations, but nobody there was hurt. The second blast took place about 1 km from the parade ground where hundreds of Nigerian and foreign dignitaries sat in the Nigerian capital city of Abuja.

When: The explosions took place on Friday morning, 1 October.

Why: “For 50 years, the people of the Niger Delta have had their land and resources stolen from them,” a statement issued by MEND said. The militant group is upset over the poverty and ecological damage in the oil rich Delta region in southern Nigeria. Most of the people in Nigeria earn less than $1 a day despite being a top member of OPEC and producing hundreds of thousands of oil barrels a day. Nigeria got its independence from Britain in 1960.

How: MEND and other small rebel groups from the Delta region have used car bombs, kidnappings and sabotage of oil pipelines to wage a violent campaign against the Nigerian government. The government signed a peace deal last year promising pay-outs and amnesty to fighters who surrendered their weapons. Militants complain Abuja failed to keep up its promise and has violated the agreement.