The Selling of the Woodrow Wilson Center 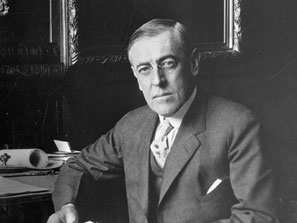 “Woodrow Wilson is looking down in horror at what the Woodrow Wilson International Center for Scholars (WWC) is doing in his name.”

That’s as true today as when I wrote it back in May (see “The Woodrow Wilson Center Desecrates its Namesake’s Legacy and Violates its Congressional Mandate”).

Since then, the DC-based WWC (WilsonCenter.org) has been condemned by journalists, a Wilson family descendant, a prominent Congressman, and other Americans for:

The WWC is a think tank-like institution created by The Woodrow Wilson Memorial Act of 1968.  Congress stipulated that the WWC must commemorate Wilson’s “ideals and concerns” and memorialize “his accomplishments.”  One-third of its funding comes from taxpayers.  Its president since 1999 is former Indiana Congressman Lee H. Hamilton.

The WWC currently has about 30 programs organized around topics or regions, such as History and Public Policy, Latin America, the Middle East, Science and Technology, Urban Studies, and the Cold War.  Besides its staff of 150, the Center also invites experts, scholars, lobbyists, “corporate leaders,” “leading thinkers,” and dignitaries to discuss, research, and publish on public affairs, including “overlooked issues.”

The WWC boasts that it has “a particular strength in international affairs, a reflection of President Wilson’s strong advocacy of international understanding.”

In reality, Woodrow Wilson’s “ideals and concerns,”  “accomplishments,” and “advocacy of international understanding” are of little concern to the WWC.   Instead, its agenda is driven mainly by money and politics.

This article aims to go into more depth about issues that have arisen since the initial exposé:

Back in May, I was unaware that WWC President Lee Hamilton is a board member of one of the Center’s top corporate donors, BAE Systems Inc.  That’s the American division of the largest weapons and defense firm in the world, BAE Systems plc, based in the U.K., with annual sales exceeding $36 billion.

Lee Hamilton’s 34 years as Congressman (D-IN) and his service on the CIA External Advisory Board, FBI Director’s Advisory Board, 9/11 Commission, and elsewhere are cited in his biography on the WWC website.

Nowhere, however, does the WWC mention his simultaneous service to corporate America.  Hamilton — whose WWC salary exceeds $410,000 and who qualifies for a hefty Congressional pension — is a member of the boards of not only BAE Systems Inc. (since 2004), but also Carbon Motors (since 2008), and the Albright Stonebridge Group (since 2006).

Why is the WWC silent about Hamilton’s corporate memberships? Maybe because the average American knows that cozy corporate relationships are incompatible with, in this case, Hamilton’s claim that his WWC is “a neutral forum for open, serious, and informed dialogue.”

Even aside from Hamilton’s corporate connections, can the WWC serve as a “neutral forum” for, and objectively analyze, the issues facing the American people when companies with mercenary agendas – overseas business interests, deals with sordid foreign governments, genocide denial, Federal contracts, and more – are helping to foot WWC’s budget?

BAE, for example, has lobbied against an Armenian genocide resolution in the U.S. Congress and, like several WWC donors, is a member of the American Turkish Council.  The ATC is a business group that has shamelessly labored to defeat the Armenian resolution and that FBI whistle-blower Sibel Edmonds has accused of serious wrongdoing.

No one believes that BAE, and the fifty or more other corporations that have forked over thousands to join the WWC’s WilsonAlliances program, have no influence on the WWC’s agenda and activities.

Companies who pony up cash not only receive “complimentary use” of WCC facilities blocks from the White House.  They also get — the WWC admits this — “private customized meetings with staff and scholars to discuss policy issues that are specific to your business interests.”

It turns out that three days before my initial report on the WWC was published, the 79 year-old Hamilton informed his staff that he will be retiring as president.  Not surprisingly, the WWC’s harem of mega-corporations are throwing him a going-away party.

On October 5, “a Gala will be held to celebrate the last decade at The Woodrow Wilson International Center for Scholars, and to honor Lee H. Hamilton.”

BAE Systems has shelled out $250,000 to be the evening’s sole “Presenting Sponsor.”   Did we mention that in the last three years BAE has also donated a minimum of $100,000 to the WWC’s parent, the famed Smithsonian Institution?  The Smithsonian (the site of the WWC Gala) has even more unsavory corporate donors and relationships than the WWC.  But we’ll save that for another time.

What does $250,000 buy BAE?  President Linda Hudson (she’s also Executive Director of the parent BAE’s board) gets to be the event’s “Presenting Chair.”