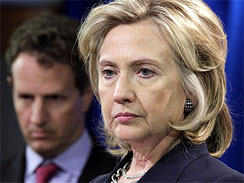 Timothy Geithner and Hillary Clinton announced a new round of sanctions against Iran on September 29, 2010. (AP)

“The West won the world not by the superiority of its ideas or values or religion but rather by its superiority in applying organized violence. Westerners often forget this fact, non-Westerners never do.”

“By alleging Iran has some problems, America’s problems aren’t resolved. Just alleging that Iran has problem is not going to resolve Mrs. Clinton’s problems for her.”

Timothy Geithner and Hillary Clinton announced a new round of sanctions against Iran on September 29, 2010. (AP)

On Wednesday afternoon, in a joint press conference, Secretary of State Hillary Clinton and Secretary of the Treasury Timothy Geithner announced that the United States had imposed a new set of unilateral sanctions, including a travel ban and freezing of assets, against a number of top-ranking Iranian officials whom it accused of “serious and sustained human rights abuses” since the presidential election last year. The measure, which comes less than four months after the UN Security Council’s latest illegal resolution and the Obama administration’s last round of economic sanctions, was enacted via an Executive Order signed into effect last night by the President.

This marked, as Clinton pointed out, “the first time the United States has imposed sanctions against Iran based on human rights abuses.” Every US administration since Carter’s has issued unilateral sanctions against Iran due to its continued opposition to US imperialism and insufficient deference to American diktat. However, the sanctions have previously been justified using the pretense of Iran’s alleged “active support of terrorism,” its totally legal and fully monitored nuclear energy program, as well as the wholly fabricated notion that “the actions and policies of the Government of Iran constitute an unusual and extraordinary threat to the national security, foreign policy, and economy of the United States” and required “the declar[ation of] a national emergency to deal with that threat.” This last hysterical claim was introduced by the Secretary of State’s Presidential husband back in 1995.

This time around, Hillary Clinton stated, with regard to the eight government officials specifically targeted by the new order, “on [their] watch or under their command, Iranian citizens have been arbitrarily arrested, beaten, tortured, raped, blackmailed, and killed. Yet the Iranian Government has ignored repeated calls from the international community to end these abuses, to hold to account those responsible and respect the rights and fundamental freedoms of its citizens. And Iran has failed to meet its obligations under the International Covenant on Civil and Political Rights.”

Apparently, the United States’ own recent history regarding the invasion and occupation of two foreign countries, the kidnapping, indefinite detention without charge, and the physical and psychological torture of thousands of people, including at places like Guantanamo, Bagram, and Abu Ghraib (where prisoners were raped by their American captors) is irrelevant to the administration’s finger-pointing charade and ongoing demonization campaign against Iran. Prisoners held by the United States in Afghanistan and Guantanamo, in addition to being “chained to the ceiling, shackled so tightly that the blood flow stops, kept naked and hooded and kicked to keep them awake for days on end,” have also been beaten to death by their interrogators. Of the fifteen soldiers charged with detainee abuse ranging from “dereliction of duty to maiming and involuntary manslaughter,” all but three have been acquitted. Those three received written reprimands and served, at most, 75 days in prison for their crimes.

In contrast, after reports of torture at Iran’s Kahrizak prison surfaced, the Iranian government moved swiftly to close the facility because it “lacked the standards” to maintain “rights of detainees” and launched an investigation into the allegations. Around the same time, 140 detainees were released from Tehran’s Evin Prison at the urging of the head of the Judiciary and Majlis ministers.

Additionally, according to a Financial Times report from June 25, 2009 and featured only as an insert in the print edition, several students who had been arrested during the post-election protests, rallies, and riots, were freed in order to join 1.3 million other young Iranians in taking the national university entrance exam.

In December 2009, Iranian authorities announced that twelve prison officials from Kahrizak had been arrested and charged with murder and other crimes, including abuse, negligence and deprivation of prisoners’ legal rights. This past June, courts passed down prison sentences and other punishment to those accused and two prison guards were convicted of murder and “intentional assault and battery” and were sentenced to death. It was reported this week that the death sentences have been rescinded at the request of the families of the victims.

Of course, human rights abuses in Iran are indeed serious and deserve condemnation. Most recently, Hossein “Hoder” Derakhshan, Iran’s so-called “blogfather,” has been convicted of “collaborating with hostile governments, committing blasphemy and propaganda against the Islamic Republic, and managing an obscene website” and sentenced to 19.5 years in prison.

Meanwhile, the United States firmly protecting its own war criminals, maintains a two-tiered justice system, routinely criminalizes dissent and whistleblowing, and breeds soldiers who kill civilians for sport and dismember corpses for fun.

“The steady deterioration in human rights conditions in Iran has obliged the United States to speak out time and time again. And today, we are announcing specific actions that correspond to our deep concern. The mounting evidence of repression against anyone who questions Iranian Government decisions or advocates for transparency or even attempts to defend political prisoners is very troubling,” Clinton continued, at the press conference. The Secretary of State also noted the distressing treatment of Iranian “human rights lawyers, bloggers, journalists and activists for women’s rights.”

This heartfelt announcement came just five days after the FBI launched its latest surreal assault in the US government’s “war on dissent” (as termed by former FBI agent and courageous whistleblower Coleen Rowley) by kicking down doors, raiding homes at gunpoint, issuing grand jury subpoenas, and seizing the personal property, including “documents, files, books, photographs, videos, souvenirs, war relics, notebooks, address books, diaries, journals, maps, or other evidence,” such as computers, cell phones, and emails of several American peace and justice activists in the Midwest. The raids were conducted under the guise of determining whether the targeted peace organizers and human rights advocates were actually devious supporters of “foreign terrorist organizations.”

Elderly anti-war protesters, graduate students, neuroscientists, and civil rights attorneys have all been held for years by the US government and sentenced to lengthy prison sentences on bogus charges.

Furthermore, the claim that the US government supports “transparency” is deeply ironic, considering Obama’s obsession with invoking “state secrets” and “sovereign impunity” in order to shield illegal programs like warrantless wiretapping and spying, extraordinary rendition, torture, drone warfare, and the extrajudicial assassination of American citizens from proper scrutiny and prosecution.

Whereas American officials are quick to declare their unqualified promotion of “new tools of communication” and support for “a free and open Internet,” as President Obama did last week at the United Nations General Assembly, the US is itself a surveillance state, which relentlessly monitors its own citizens. The CIA and other intelligence agencies have invested in technology and companies that specialize in monitoring social media and, this past summer, a Senate committee approved a wide-ranging cybersecurity bill that may grant the US president the authority to unilaterally shut down parts of the Internet during a “national cyber-emergency.” Just this week, the New York Times reported that the Obama administration will propose new legislation to mandate US government access to all forms of electronic communications, “including encrypted e-mail transmitters like BlackBerry, social networking Web sites like Facebook and software that allows direct ‘peer to peer’ messaging like Skype.”

“In signing this Executive Order,” Clinton declared on Wednesday, “the President sends the message that the United States stands up for the universal rights of all people” and serves “as a voice for the voiceless.”