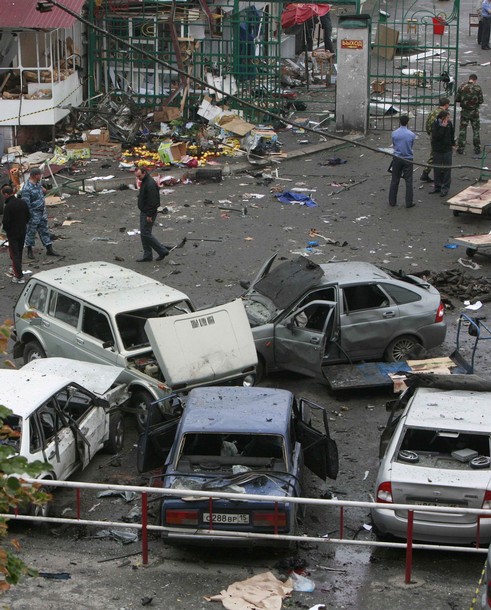 The scene of a blast site in Vladikavkaz, September 9, 2010 (Reuters) 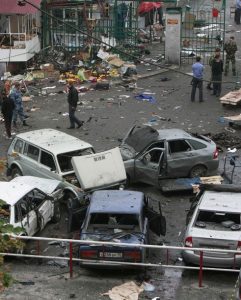 The scene of a terrorist attack in Vladikavkaz, September 9, 2010 (Reuters)

Who: A suicide bomber.

What: A car packed with explosives, metal bars, bolts and ball bearing was detonated by a suicide bomber in a busy market, killing 16 bystanders and injuring more than 100 others. At least 10 people are in a serious condition, hospital sources added.

Where: The atrocity took place in Vladikavkaz, the capital of Republic of North Ossetia, Russian Federation.

When: The attack happened at 11:20 local time on Thursday, 9 September.

Why: Islamic militants in the North Caucasus have vowed to resist Russian occupation of Chechnya, Dagestan and Ingushetia. They are fighting for an independent homeland with Shariah rule imposed on the subjects. Hundreds of people in the region, as well as outside, have lost their lives in terror attacks including suicide and car bombings. Many of the suicide bombers are relatives of Chechen insurgents who were either killed, abducted or imprisoned by Russian forces during the Chechen wars or the ongoing counter-insurgency operations.

How: Security sources in North Ossetia claimed the car came from neighboring Ingushetia. The explosion was carried out in a sedan car outside the entrance to the market. The bomb was the equivalent of 30-40 kg of TNT, the Investigative Committee said.