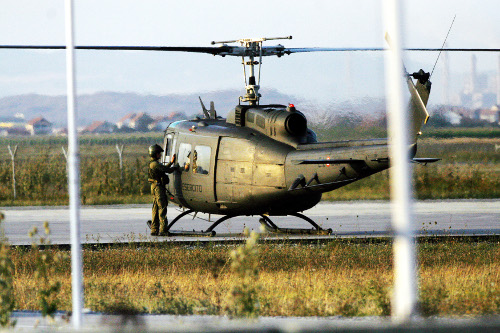 Two and a half years have passed since Kosovo unilaterally declared its independence from Serbia. After an initial wave of recognition by a significant number of countries around the world, mainly from the western democracies, the recognition process has almost stalled in the last twelve months. Kosovo is in limbo; supported by the United States and the EU heavyweights, but with its path to UN membership firmly barred by Russia and China on the Security Council, with a clear majority of countries that either oppose of haven’t decided about its recognition.

Serbia had taken the issue of unilateral declaration of independence of Kosovo to the ICJ last year, believing that the court’s advisory opinion would back its claim that such a move has breached the international law. Kosovo declared independence in 2008 after being under UN administration since June 1999. 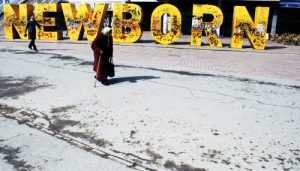 The 'NEWBORN' monument in center of Pristina, Kosovo, is a monument marking the Kosovos Declaration of Independence Day, February 17th 2008. Made of steel, weighing about 9 tones, NEWBORN is 3m high, 22m long and 1m thick. NEWBORN has become a historical symbol and is now under the protection of Kosovos Government. (BPA Photo/ Vedat Xhymshiti)

Last month the International Court of Justice at The Hague ruled that Kosovo’s 2008 declaration of independence did not violate international law.

The strongest disputer of this ruling, Serbia’s ministry of foreign affairs, has emphasized numerous times that it will consider the decision as irrelevant if it doesn’t satisfy its interests, a clear indicator about Serbian policy of just buying time while taking such initiatives as this court case.

There are 69 UN member states who have recognized Kosovo’s Independence, which was declared on February 17 2008, based on the document known as Ahtisaaris package, which was a set of recommendations for solution of the Kosovo issue that was drafted after a process of negotiations between the political leaderships of Kosovo and Serbia, under the auspices of the UN Security Council. Since the ICJ has given its opinion about Kosovo’s Independence, it is considered to be a purely political act by the Serbian representatives.

Officials of the Serbian Ministry for Kosovo told Foreign Policy Journal that “The Serbian government has defined its policy towards Kosovo and Metohija, which is well known to Kosovo Serbs, and we are not giving it up.”

European Union officials have spoken openly against any discussion of the already resolved status of Kosovo, now an independent country in the western Balkans.

Serbian deputy Prime Minister Bozidar Djelic has admitted that his country has been exposed to new European pressures to force Serbia to recognize Kosovo’s independence.

Djelic said last week in a statement to the Serb media that his country’s candidacy file for membership of the European Union may fall victim to some new political bids related to insistence of some European countries on the importance of Serbia’s recognition of Kosovo’s independence. 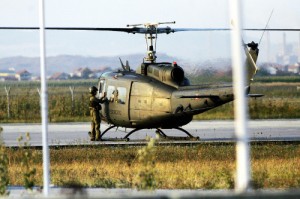 Serbia hasn’t given up its claim to Kosovo, although it lost control over its former province after a war. The U.S. and most EU nations support Kosovo’s statehood, while

Russia has sided with Belgrade in the dispute.

American, European and influential Muslim nations in the world like Turkey and Saudi Arabia, have said that the political status of Kosovo is resolved.

The current rhetoric from both Belgrade and Pristina is uncompromising. Serbia’s commitment after the ICJ has given its opinion, is about requesting from the UN General Assembly to pass a resolution demanding new talks on Kosovo’s status, and it will be soon decided in a forthcoming meeting of the UN General Assembly. European countries are still asking the Serbian government to remove the claim over Kosovo as its territory on its textual content of the resolution.

The government in Pristina says its sovereignty is not negotiable, and that Serbia is refusing to confront reality. Pristina has repeatedly declared against any political initiative that would question Kosovo’s status, while working for recognition of its independence. The most telling example of this pattern in Pristina’s politics throughout the post-war period is the process of negotiations in Vienna itself.

However, the country’s President has already opened the doors for new. “Kosovo is ready to talk for practical issues with our neighbourhood countries, such as it is, Serbia. We can start negotiations as two neighbour states,” Kosovo’s President Fatmir Sejdiu said.

One of the daily newspapers in Kosovo has reported that negotiations between Pristina and Belgrade are about to start and will be held in Oher, in the former Yugoslav Republic of Macedonia.

The developments or the affairs around the negotiations between the two countries are deepening the confusion, as just few days ago when opposition’s political representatives of Kosovo, leaded by AAK (Alliance for the Future of Kosova) told the public that lots of secret talks between Pristina and Belgrade have already been developed, but they failed to put forth any evidence.

Lately Serb officials have been banned from visiting Kosovo. Kosovo Prime Minister Hashim Thaci told reporters in a press conference, “This decision is made in order to prevent further political provocations from Serbian government officials in the territory of Kosovo.”.

The government of Kosovo has recently allowed Serbian deputy Prime Minister, Ivica Dacic, to visit Kosovo only on religious grounds, after he visited the Monastery of Decan, but he also addressed political matters in Gracanica, a Serbian majority town, in outskirts of Pristina.

A declaration, signed by the Association of Municipalities of the Autonomous Province of Kosovo and Metohija, was distributed on August 17 by an unknown Serbian organization, to Serbs in northern Kosovo. The five-page declaration says: “As the free will of Serbian people, the assembly approves the declaration of independence of the [Serbian] territories, from the creation, so called the Republic of Kosovo.”

Serbian political representatives of the Kosovo Serbs have described the so-called Independence Declaration of Serbian Territories in Kosovo as a provocation. Rada Trajkovic, a local Serb leader, quoted by Balkan Insight, said no one in Kosovo considered the declaration serious.

The so called Declaration of Independence of the Serbs in Kosovo did not demand the partitioning of Kosovo, “as long as the province of Kosovo is part of Serbia based on international law”. The declaration describes the Republic of Kosovo as a state created by genocide committed against non-Albanians.

Marko Jaksic, president of the Assembly of Serbian Municipalities and Towns of Kosovo, agreed that the political aim of the declaration was to test the opinion on the issue of possible partition, reported by Belgrade daily Vecernje Novosti.

Also, Kosovo’s daily newspaper Express claimed that either Jaksic or Milan Ivanovic, members of the Serbian National Council for Kosovo, were one of the authors engaged in drafting the mentioned declaration.

The Serbian Ministry for Kosovo, financed by Belgrade, condemned the declaration and called on Kosovo Serbs not to respond to “provocations by Pristina and irresponsible individuals from the Serbian community”.

Rexhepi called on Kosovo Serbs to renounce their loyalty to Serbia, and to pledge allegiance to their new country and benefit from full political and constitutional rights instead.

The minister regarded tension caused by Serbia over Kosovo’s sovereignty as over, explaining there was no justification for any further perplexity and warned that Kosovo  Serbs could lose their right to take part in the country’s political process if they should choose to rebel.

Although the authors or the political statement that talks about the independence of the north have not come public, Pristina has taken the warning seriously, officials from the Ministry of Interior Affairs of the Republic of Kosovo told Foreign Policy Journal.

“The Government has been willing to make a decision for armed intervention in case the Serbs decide to join Serbia or to declare the independence of this part of Kosovo,” the ministry told the Journal, for the possibility of armed intervention to protect the territorial integrity of the Republic of Kosovo. “The international community has been notified,” said officials.

“We are ready for armed response”, Interior Minister of Kosovo Bajram Rexhepi has been quoted as saying in the Belgrade daily Danas.

On his request to EU country states to recognize Kosovo’s declaration of Independence, PM Hashim Thaci said, “The people of my country did not arrive at the decision to declare their independence lightly or in a political vacuum”.

“We were long deprived of the most basic human rights, and in 1999 subject to a murderous campaign of ethnic cleansing from a Serbian government led by Slobodan Milosevic,” Thaci said.

Under the regime of former Serbian leader Slobodan Milosevic, Belgrade in 1990 put an end to decades of broad autonomy for Kosovo Albanians and introduced direct rule in the province, where minority Serbs led all institutions. Calls for renewal of autonomy by ethnic Albanians were rejected. This led to armed rebellion by Kosovo Albanian groups, followed by stern Serbian repression in 1998 and 1999. The international response came by way of 11 weeks of NATO bombing of Serbian installations. The war in Kosovo erupted in 1998 when Serbia launched a brutal crackdown against the Albanian civilians, as well as people fighting for liberation of their country from Serbia. The UN administration was introduced after 11 weeks of NATO bombardment of Serbia due to Belgrade’s repression against two million Kosovo Albanians. 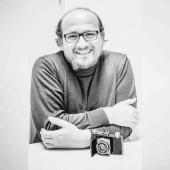