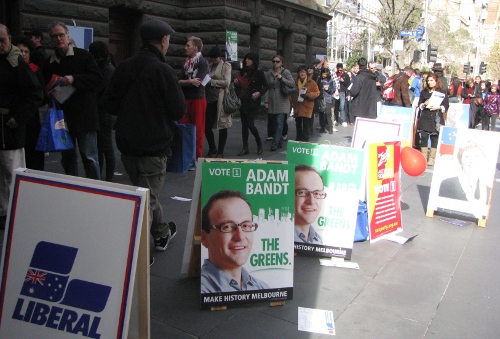 Four independents and a Greens MP will determine who governs Australia in the coming weeks as the nation’s election points towards a hung parliament for the first time since World War II.

Voters across the country deserted the governing Australian Labor Party (ALP) in droves, with its primary vote down more than 5 per cent and down in all states and territories except Tasmania.

The ALP is estimated to have lost up to 18 seats, including eight seats in the state of Queensland and four in New South Wales, and is relying on the outcome of several seats deemed doubtful. But the conservative Liberal/National Party (LNP) coalition has fallen four seats short of the 76 seats required to govern outright. 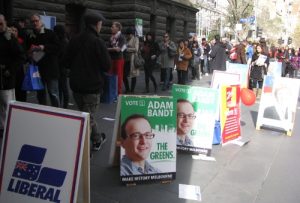 At the close of counting on Sunday at 2:00am AEST, the Australian Electoral Commission stated that both the LNP Coalition and Labor Parties held 71 seats, although other estimates provide ranges between 70 and 72. Independents hold three seats and The Greens one seat. Up to six seats are still to be decided, with pre-poll and postal votes determining the victors.

Speaking to Fairfax Media via telephone today, Professor George Williams from the University of New South Wales said that a no-confidence motion could be moved against the caretaker government led by Prime Minister Julia Gillard, requiring both her and Opposition leader Tony Abbott to try and form a minority government.

Under the Australian Constitution, Parliament is required to sit within 30 days of the declaration of the result, when negotiations would be instigated. In the likelihood of a deal between either Ms. Gillard or Mr. Abbott and the independents and minor parties, an “unworkable” government would be declared and a new general election “likely”.

While the ALP is hopeful that it can come up with an acceptable solution with the independents and form a minority government, Saturday’s result is a crushing blow after Julia Gillard took over as Prime Minister from Kevin Rudd only two months ago.

Speaking to supporters in Melbourne, Ms. Gillard said she would continue to govern in the best interests of Australia until negotiations with the independents and Greens had concluded. She quoted Bill Clinton in declaring that “The people have spoken but it’s going to take a little while to determine what they’ve said.”

In Sydney, members of the Liberal Party cheered leader Tony Abbott as he declared that the Coalition was “back in business” and that his team was “ready to provide steady, mature government.”

Mr. Abbott said that Labor had lost its 17 seat majority and, therefore, legitimacy to run the country. After acknowledging Ms. Gillard’s fighting campaign qualities, he also took the opportunity to fire a broadside at the ALP powerbrokers, saying that the election was a “referendum on the political execution of a Prime Minister.”

Both leaders stressed that the outcome had not yet been finalized.

The other big winner was the Greens Party, who claimed their first seat in the House of Representatives when Adam Bandt defeated Labor candidate Cath Bowtell in the electoral seat of Melbourne, previously held by the ALP’s Lindsay Tanner, the retiring Finance Minister. It was the first time in 106 years that Labor had lost the seat.

The Greens are also poised to hold the balance of power in the Senate. Senator Bob Brown, The Greens’ Parliamentary leader, said that The Greens had a trusted record of using parliamentary influence wisely and would continue to be a responsible watchdog in the Australian Parliament. Senator Brown has stated that he will talk with and listen to leaders from both major parties.

Mr. Bandt is likely to side with the ALP. The three independents, Tony Windsor, Bob Katter, and Rob Oakeshott, all former members of the National Party, have yet to declare their allegiances. A fourth independent, former intelligence analyst with the Australian Security and Intelligence Organisation (ASIO) turned whistleblower, Andrew Wilkie, is favored to win the Tasmanian seat of Denison from the ALP. Formerly a safe Labor seat, Mr. Wilkie recorded a swing of more than 22 per cent. He resigned from his position in ASIO in 2003 over concerns regarding misrepresentations of Australia’s involved in the invasion of Iraq.

Depending on the outcome of pre-poll and postal votes, the election may also see the elevation of Australia’s first Indigenous person, Western Australian Liberal candidate Ken Wyatt, to the House of Representatives. Mr. Wyatt is current locked in a tense battle with Labor’s sitting member, Sharryn Jackson. What is certain is that the country’s youngest ever parliamentarian, 20 year-old Wyatt Roy, will represent the Liberal National Party in the southern Queensland seat of Longman.

Speaking to the ABC network, Ms. McKew expressed her disappointment at losing but held no regrets. She said that the “national (political) campaign left a lot to be desired” and cited the decision to remove Prime Minister Kevin Rudd two months before an election as being a factor in Labor’s drop in support.

For the Liberal Party, 30 year parliamentary veteran Wilson Tuckey was ousted by the National Party’s Tony Crook in the Western Australian seat of Connor.

The dramatic conclusion to the election night follows a campaign lasting five weeks that critics say was too heavy on slogans and negative advertising. Both parties attacked their opponent’s credibility on a number of policy issues with Labor focusing on Tony Abbott’s stance on industrial relations, refusal to support the National Broadband Network, economic stimulus package during the Global Financial Crisis, and cut funding to health and education. The Coalition centered on the ALP’s poor economic management credentials, the proposed levy on mining company profits, and matters related to border protection.

In Australia, a party is required to win at least 76 seats in the House of Representatives, or Lower House to form government, in this case, will need to be obtained courtesy of the independents and minor parties.

The last hung parliament at federal level occurred in 1940, when Prime Minister Robert Menzies, leader of the United Australia Party and future founder of the Liberal Party, formed government with the assistance of two independents. He would become Australia’s longest serving Prime Minister to date, holding the position for 18 years over two terms before retiring in 1966. He died in 1978.