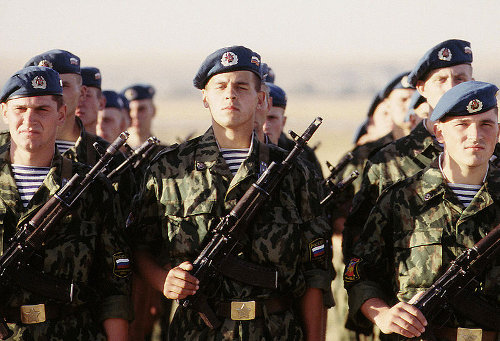 The 2006 report of the Strategic Studies Institute’s scholar Stephen J. Blank before the Subcommittee on the Middle East and Central Asia of the US House of Representatives [52] traces back exactly to the text prepared by Ariel Cohen seven years earlier, when the White House was occupied by the Clinton Administration. The March 2010 Paper edited by Jim Nichol, specialist in Russian and Eurasian Affairs, and commissioned by the Congress Research Service [53] shows to what extent the American foreign policy for Central Asia has changed, and this with the advent of a new administration. Despite President Obama’s willingness to mend fences with Russia (by pursuing the “reset” policy [54]) and to negotiate with China on equal footing, the conservative wing of the American political elite is very likely to prevail. And this presumption makes one think of another string of acute tensions that America may inflict upon itself all around the world.

What is important to draw from the above reasoning is that America’s increased presence in Central Asia will be understandably hampered by the American overstretched engagement in other (all the more so neighboring) parts of the world (Afghanistan, Iraq) and by its continuous bickering over the Russian and Chinese political agenda. Nonetheless, America will still be actively present on the ground, advising its Central Asian partners and luring them with hyped promises of tangible economic benefits. But the American pawns are needed elsewhere, so that they are quite unlikely to play any game on the Grand Chessboard which could register another victory on the US track record. Yet, America will watch the game played by others and possibly intervene, when the game rules, perceived as such by Washington, are flouted.

Another major player in the Central Asian region is the European Union whose freedom of maneuvering has greatly expanded with the entry into force of successive treaties, the latest of which is the Lisbon Treaty signed in 2007 and ratified in 2009. It is worth noting that from the end of World War II, when Europe’s military and economic capabilities dramatically shrank, the united Europe has been preaching full-scale democratization, respect for law, and the spread of human rights all over the world. Unlike the United States, which sees itself as the birthplace of “real” democracy untarnished by the bloodshed (taking no account of the persecution of Native Americans, perceived at that time as a just conquest of what America was blessed to possess) and totally uncompromised, as opposed to Europe in the days of the Holocaust; the Europeans had their chance to learn that the deadliest of all wars could bring about the nastiest atrocities ever imagined. The European course, which is the course for peace and dialogue, makes out of Europe the main preacher of non-violent coexistence and cooperation, and the biggest donor of foreign aid.[55] As was mentioned in the first half of this article, big victories can only be achieved through warfare, which becomes the last resort when words are no longer meaningful. Unless there comes up a pretext for armed conflict, cannons are silent but otherwise they speak, and do so in a trigger-happy fashion. It is thus understandable that Europe has never competed for a key role in Central Asian politics, but instead has chosen to be the peaceful promoter of the European ideals abroad and the “acquis communautaires“ [literally: what has been achieved at the community level] within the European Community.

The current framework of cooperation between the EU and Central Asia is based on the “European Union and Central Asia: Strategy for a New Partnership” adopted in June 2007 by the European Council.[56] According to this paper:

The EU has a strong interest in a peaceful, democratic and economically prosperous Central Asia. These aims are interrelated. The aim of the EU Strategy is to actively cooperate with the Central Asian States in reaching these goals as well as to contribute to safeguarding peace and prosperity in neighboring countries […] The EU strongly believes that strengthening the commitment of Central Asian States to international law, the rule of law, human rights and democratic values, as well as to a market economy will promote security and stability in Central Asia, thus making the countries of the region reliable partners for the EU with shared common interests and goals.

A careful study of Europe’s Strategy for Central Asia clearly shows that the European ambitions are strictly limited to the task of securing Central Asia as a trustworthy trade partner and energy supplier, given the recurring gas conflicts between Russia and Ukraine that left Europe freezing at the very start of 2009.[57] Knowing Europe’s proven attachment to the promotion of human rights and freedoms, the human rights issue is very high on the agenda, and this is partly reminiscent of American policy towards the USSR that led to the adoption of the Jackson-Vanik amendment linking trade to the free emigration of Jews from the Soviet Union.[58] Bringing Central Asia closer to Europe is in the EU’s utmost interest, as it provides the European Union with a kit of tools indispensable for ensuring its dependability in terms of energy and projecting its benign image over the region. The EU is now enjoying the most respect from the Central Asian republics, as it vehemently refrains from any intriguing for or against any of the regional protagonists, rather preferring to share Central Asia with others, than trying to tie it to the chariot of the European future. Unlike Russia, China and the US, the EU demonstrates much more inflexibility towards the rapid evolution of the regional political landscape. It is worth remembering the tragic events of May 2005, when hundreds of protesters were brutally massacred by the Uzbek police in the town of Andijon.[59] A harsh embargo was imposed by the European Union on Uzbekistan, banning its high-ranking officials from traveling to Europe and limiting trade flows. These sanctions were lifted only in October 2009, four and a half years after the Andijon massacre,[60] whereas China had not uttered a word critical of Islam Karimov’s handling of his country’s turmoil. No wonder, there has been no Delegation of the European Union to Uzbekistan so far.

All things considered, the European attitude towards Central Asia is a far cry from what Europe used to be at the time of its colonial glory. It would be impossible to reshape today the world as it looked a few centuries ago, but we still have stronger and weaker nations. Whilst the first lead and trump, the second try on the skin of vassals. Europe may be an ideal place to go to on summer vacation, and that’s what makes Europe richer. But there is little chance we will ever see Europe coming to Central Asia, armed to the teeth, full of Hitler-style claims that look innocent till the moment they are fully satisfied. The EU is not against the idea of advancing its pawns a bit farther on the Grand Chessboard, but there is not much place left to enjoy the fair game.

Zbigniew Brzezinski was the first person among contemporary foreign-policy thinkers to discover the great potential of Central Asia both for conflict and cooperation. His apprehension of the Eurasian Balkans coming to the forefront of world politics is quite unique. But was Mr. Brzezinski actually the first person on earth to think of the future of the world with reference to the heartland concept? No. It was Halford Mackinder, one of the founding fathers of geopolitics and geostrategy, who advanced his Heartland Theory to the Royal Geographical Society in 1904. In his later book, “Democratic ideals and reality: a study in the politics of reconstruction“,[61] which appeared in 1919 at the time of the Paris Peace Conference charged with the drafting of a new world order, Mackinder wrote:

Who rules the Heartland commands the World-Island,

Who rules the World-Island commands the world

Would be it justified to replace “East Europe” with “Central Asia”? The game is not over yet. The Eurasian Balkans, which became the new heartland almost a hundred years after Mackinder’s seminal work, are still open for competition. As they continue to be free, no major power can pretend to control Eurasia. But if otherwise this door is closed, the fate of the world will be at stake. And who knows then what this fate will look like…?