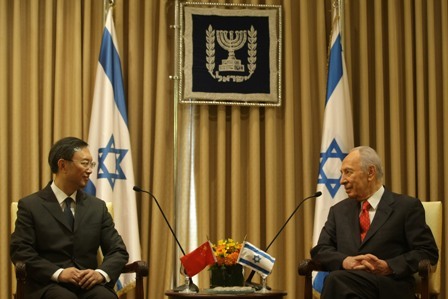 The Zionist state’s relationship with China is something that has come to public attention with a new Chinese documentary on Israel, although the relationship between Communist China and Israel is of long and strategic duration.

Walk into Israel – the Land of Milk and Honey has been produced by China’s national TV channels in co-operation with Israel state authorities. The title should be a giveaway as to the nature of the series: one of the sustaining myths of Israel is that the superior Jewish settlers made Palestine flourish where once it was just sand occupied by a pack of rag-heads; never mind that Palestine was, before being blessed by the presence Irgun, Haganah, Palmach and Stern, a land of plenty.

The People’s Daily reports of the event launching the series:

An event to mark the launch of the TV documentary series “Walk into Israel – The Land of Milk and Honey,” the first comprehensive TV series about the Jewish civilization and the State of Israel produced by CCTV, was held at the National Center for the Performing Arts in Beijing on July 29.

“The TV documentary series ‘Walk into Israel – The Land of Milk and Honey’ is the most important TV series ever produced in China about Israel and the Jewish People, and it offers the viewer an historical, comprehensive and systematic introduction to the Jewish civilization and Israel,” said Guy Kivetz, Director of Communications and Public Diplomacy at the Embassy of Israel in Beijing.

“Through this amazing program, which explores and unveils the wonders of the State of Israel and the contributions of the Jewish Civilization to the world, we are now able to present the real and bountiful Israel to the Chinese public. We are sure that this program will enhance the understanding of Israel in China and will therefore further promote friendly relations between the two peoples,” he said.

Amos Nadai, Ambassador of Israel to China, delivered a speech during the launching event.

He said “Israel and China are two great civilizations known for their contributions to mankind and two modern states that share a rich history and many modern challenges. After watching the TV series, people may have a better understanding of the history and development of the 4000-year-old Jewish civilization as well as the rapid development of the modern State of Israel. This series has the potential to enhance mutual understanding and traditional friendship between Chinese and Jewish nations, promote cooperation between the two peoples and jointly build a better future for all.”

Around 450 people, including CCTV Vice President Gao Feng and foreign diplomats were present at the event. The 12-episode HD TV series is now being broadcasted by the CCTV-2 and will be broadcast by CCTV’s other leading channels in the future.[1]

Ties between Israel and China were virtually non-existent prior to the 1980s due to China’s support for the Muslim world and the Palestinian Liberation Organization (PLO). The two nations developed military ties in the 1980s, and formally established diplomatic ties in the early 1990s.

Trade between the countries has since surpassed $4 billion per year.[2]

The Arutz Sheva claim that Sino-Zionist relations are something new is not accurate. There is a long history between Maoist China and Israel, both states emerging at about the same time, and with the same revolutionary Marxist zeal.[3] Israel’s Ambassador to China, Amos Nadai, was more accurate when he referred, as quoted above by the People’s Daily, to the “traditional friendship between Chinese and Jewish nations.”

Rabbinic tradition claims an ancient association between “Jews” and China. Rabbi Jacob S Raisin, writing of the Chinese Jews, stated that “Some medieval commentators state that when Isaiah[4] forecasted the restoration of ‘the land of Sinim’ by the Jews,” he had in mind Hebrews who had crossed the Jordan and who had travelled through the Caucasus, Turkestan and Tibet up to the Yellow River. [5]

During the 1640s there was a revolt against the Ming Dynasty, a dynasty which protected the Jews. The city of Kai-Fung-Foo fell and its Synagogue was destroyed (indicating the revolt was against Jewish influence). A “Jewish Manadarin” named Chao-Yng-Cheng, led an army that retook the city, and he rebuilt the synagogue in 1663. This history appears in engravings on the Synagogue and attests to the great political, commercial and military influence the Jewish community had in China[6] (unless the engravings are an “anti-Semitic forgery”).

The Anglo-Chinese Opium Wars of 1839 and 1858-60 were attempts to kick out the Sassoon dynasty that controlled the opium trade under the protection of the British Empire. The Manchu emperor attempted to stop the trade but the Opium Wars only ended in defeat and the extension of the trade throughout China.

T. V. Soong[7] head of Sassoon’s Bank of China, held numerous important posts in the Kuomintang Government, including those of Governor of the Central Bank of China and Minister of Finance (1928–31, 1932–33); Minister of Foreign Affairs (1942–45); President of the Executive Yüan (1945–47), and premier in 1949. After failing to reconcile Communist and Nationalist factions he moved to the USA.

Soong’s sister, Soong Ch’ing-ling, became prominent in revolutionary politics, and in 1914 she married Sun Yat-sen, the revolutionary leader. After Sun’s death (1925) she was elected (1926) to the Kuomintang central executive committee, resigning in 1927 in protest at the expulsion of the Communists. The outbreak (1937) of the Sino-Japanese War reconciled her with the Kuomintang until 1946. From 1949 she served as Vice Chairman of the Government of Communist China.

Another sister, Soong Mei-ling, married Dr Sun’s successor, Chiang Kai-shek in 1927. In 1945 she became a member of the central executive committee of the Kuomintang.[8]

When Dr Sun died in 1925, the Sassoon interests sent T V Soong to offer Chiang Kai-shek $3,000,000 cash, Soong’s own sister as a wife (although Chiang already had a wife and family) and the offer of support for the presidency of China in succession to T V Soong’s late brother-in-law.[9]