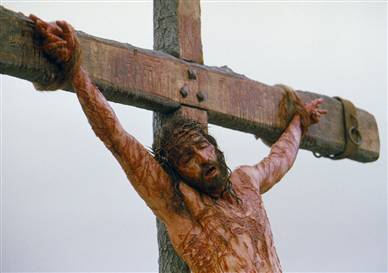 Jesus on the cross, from the film "The Passion of the Christ"

There is a considerable manufactured controversy regarding the assertion that Jews were responsible for the crucifixion of Yeshua the Messiah (a.k.a. Jesus the Christ). According to this narrative, anyone who suggests Jews had a role is implicitly an anti-Semite, and comparisons to the Nazis and invocation of the Holocaust are seemingly obligatory in such arguments.

In a recent example, Stephen C. Webster writes in Raw Story that Glenn Beck, in saying that “the Jews murdered the biblical messiah Jesus Christ” was siding “with Nazi propaganda”. Webster argues that, “as the story goes, Jews did not kill Jesus. The Roman empire had him executed after Jewish religious leaders became worked into a frenzy over his ideas—or so the New Testament claims. Armed Roman guards allegedly beat and lashed him, then hung him on a cross until death.” He asserts that “claiming as fact that Jews killed Jesus” indicates one’s adoption of “a meme otherwise endemic to anti-Semitic thought and literature. The implication that Romans were stalwarts of law and reason who merely appeased the bloodthirsty Jewish mob was a vital component of Nazi propaganda.” 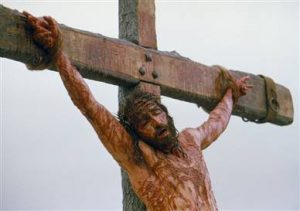 Jesus on the cross, from the film "The Passion of the Christ"

Arguments such as this, which deny that Jews had any responsibility for Yeshua’s death (beyond becoming “worked into a frenzy over his ideas”, that is), are common, and even appear from time to time in commentary in the mainstream media from time to time. Neocon pundit Charles Krauthammer, to cite another example, wrote, after the release of the film “The Passion of the Christ”, that it was necessary “to unteach the lesson” of 2000 years “that the Jews were Christ killers.”

Krauthammer similarly invoked Nazi persecution of the Jews in his argument, writing that “The blood libel that this story affixed upon the Jewish people had led to countless Christian massacres of Jews and prepared Europe for the ultimate massacre—6 million Jews systematically murdered in six years—in the heart, alas, of a Christian continent.” Krauthammer didn’t go as far as Webster in denying that, according to the Bible, “Jews did not kill Jesus”; he contented himself with suggesting that the Biblical account “lends itself to interpretation.”

See, the book of Matthew (Mattityahu) tells how “the head cohanim [priests] and the elders of the people gathered in the palace of Kayafa [Caiaphas] the cohen hagadol [high priest]. They made plans to arrest Yeshua surreptitiously and have him put to death” (26:3-4; emphasis added).

The book of Mark similarly also relates how “the head cohanim and the Torah-teachers were trying to find some way to arrest Yeshua surreptitiously and have him put to death” (14:1; emphasis added).

The book of Luke further explains how “the head cohanim and the Torah-teachers began trying to find some way to get rid of Yeshua, because they were afraid of the people”, and how Judas (Y’hudah) “approached the head cohanim and the Temple guard and discussed with them how he might turn Yeshua over to them. They were pleased and offered to pay him money. He agreed and began looking for a good opportunity to betray Yeshua without the people’s knowledge” (22:2, 4-5).

The book of John (Yochanan) additionally states that “the head cohanim and the P’rushim [Pharisees] called a meeting of the Sanhedrin [religious court; council] and said, ‘What are we going to do?—for this man is performing many miracles. If we let him keep going on this way, everyone will trust in him, and the Romans will come and destroy both the Temple and the nation.’ But one of them, Kayafa, who was cohen gadol that year, said to them, ‘You people don’t know anything! You don’t see that it’s better for you if one man dies on behalf of the people, so that the whole nation won’t be destroyed'” (11:47-50; emphasis added).

It is not clear which the Jewish religious leaders feared more: Yeshua’s rapidly growing following becoming a threat their own authority, or the risk of provoking the Romans into increasing their tyrannical grip on Judea. But what is perfectly clear from the Bible is that they wished Yeshua dead. And they didn’t just wish it—they acted upon their desires and actively saw to it that he was killed.

The Bible story continues, explaining how Y’hudah betrayed Yeshua with a kiss in Gethsamane (Luke 22:52-53), and how Yeshua was then taken before Kayafa and an illegal Sanhedrin, for the purpose of seeking false testimony against him in order to sentence him to death (on the illegality of this Sanhedrin, see Stern’s Jewish New Testament Commentary, p. 100).

Then the Sanhedrin brought Yeshua before Pontius Pilate, the Roman prefect of Judea, who initially answered their request for judgment by saying, “You take him and judge him according to your own law”. But not just any punishment would do. The Jews were out for blood, as demonstrated by their response that, “We don’t have the legal power to put anyone to death” (John 18:31).

As Stern explains, “although the Romans permitted the Judeans a measure of self-government, they did not allow the execution of a death sentence; capital punishment was reserved for Rome” (Commentary, p. 207). The Jewish historian Flavius Josephus also recorded how the Jewish leaders were obligated under Roman law to bring accused individuals to the Romans for the execution of a death sentence (Antiquities of the Jews, Book XX, Chapter 9).

When Yeshua would not answer the charges the Sanhedrin laid against him, Pilate pulled him aside and asked him “‘Are you the king of the Jews?’ Yeshua answered, ‘Are you asking this on your own, or have other people told you about me?’ Pilate replied, ‘Am I a Jew? Your own nation and head cohanim have handed you over to me; what have you done?'” (John 18:33-35; emphasis added).

When Pilate returned with Yeshua before the Sanhedrin, he declared, “‘I find no fault in this Man.’ But they were the more fierce, saying, ‘He stirs up the people, teaching throughout all Judea, beginning from Galilee to this place.'” When Pilate heard that Yeshua was from Galilee, he sought to relieve himself of responsibility by saying Yeshua should be sent to Herod Antipas, who had jurisdiction there. But Herod, after he and his men had mocked and mistreated Yeshua, sent him back once more to Pilate.

Then Pilate again said to the Sanhedrin, “You brought this man before me on a charge of subverting the people. I examined him in your presence and did not find the man guilty of the crime you are accusing him of. And neither did Herod, because he sent him back to us. Clearly, he has not done anything that merits the death penalty” (Luke 23:13-16; emphasis added).