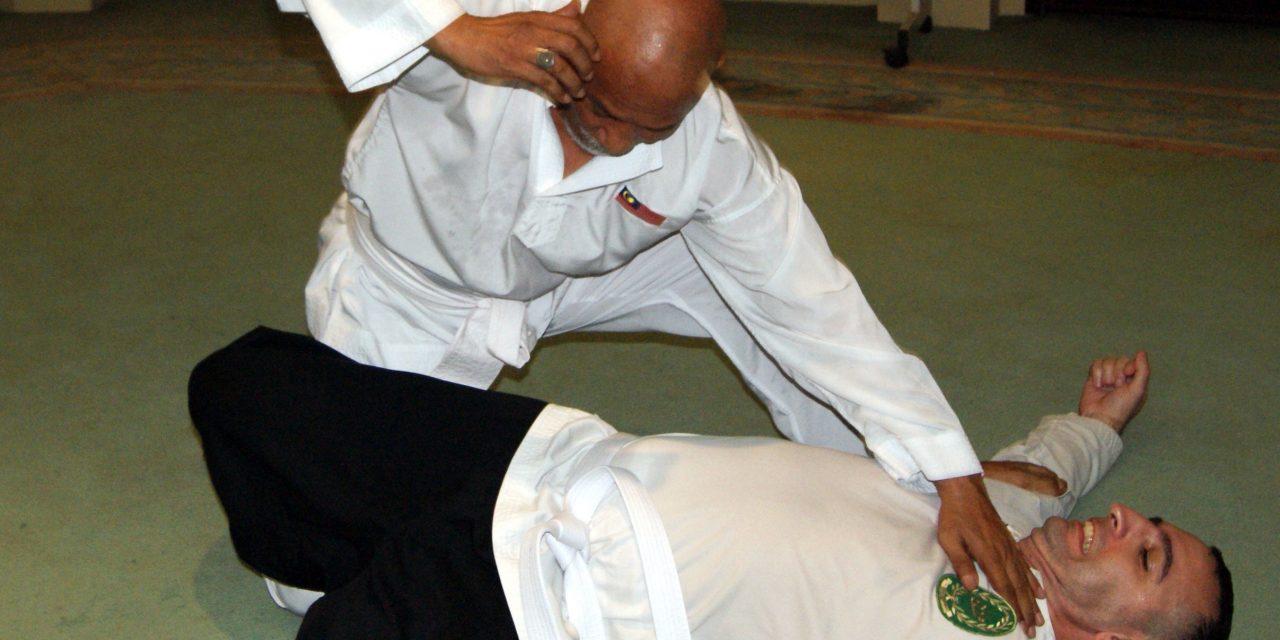 A Malaysian Art Tied Closely to the Religion of Islam

Guru Mazlan Man stood in a neutral stance, hands at his side, feet side by side, a natural and relaxed stance, which is the starting point of all Silat Kalam movements. I threw a punch at his face. He blocked my punching arm, knocking it skyward. Next, he drove his knee into the tendons at the back of my knee joint. He was only going at a quarter speed, but the pain was incredible. After 50 years of martial art practice, the Guru was perfect. In every movement, I could feel his bones cutting through my flesh and digging into my nerves. 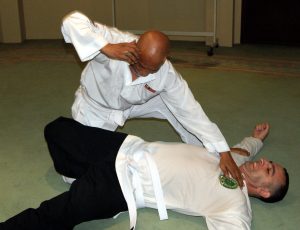 He placed his shin bone against the back of my knee and leaned forward. I had no choice but to fall down, on one knee. Next, he stomped down hard on my calf muscle which was flat on the ground. Then he backhanded me in the face, and I fell backward. My body was completely locked. My own natural skeletal structure had betrayed me. The only way I could stand back up was if the Guru removed his foot from my calf muscle and then reached a hand down, to help me stand.

This was Silat Kalam, an art designed to completely subdue an attacker, but never to be used as an attack.

In the west, when people hear the word “Guru”, they associate it with some new age religion or Hindu philosophy. But in Malaysia, the word Guru simply means teacher or master. And it is the name applied to all martial arts teachers.

Everyday, the students meet in a community meeting room of a government building in Kuala Lumpur, Malaysia. The lead student, Fami, calls us to attention, “Kalam sedia!”  The students immediately bring their hands up to prayer position and begin reciting their devotions. They give thanks for their health and strength and for the opportunity to practice martial art. Then they remind themselves that they practice martial art because of God.

After a brief warm-up and stretching, the students start into the buah, or choreographed sets of movements. Silat Kalam has 28 buah.

Silat Kalam is essentially a grappling art. Because the art is strictly for defense, each of the buah, or series of movements, begins with an opponent attacking you. You block, using one of four basic blocks, and then throw and lock the opponent. The locks put the opponent on the ground, tied up like a pretzel. At the least, the opponent is subdued. But a slight twist or variation in the throw or lock could severely cripple or even kill the opponent.

Unlike submissions in other arts, the locks in Silat Kalam are completely impossible to break out of.

The Guru is over sixty years old, but when he has me in a lock, I am truly incapacitated, completely unable to escape, and, as he says, totally helpless.

I was the first non-Muslim to ever be permitted to study Silat Kalam. It was a great honor and also an incredible cultural experience. Each day, I met the Guru for training and also for lessons about the religion. He never asked me to convert, only to learn.

He told me, “We are all children of Adam, children of God. God made us all different, so we can learn from each other and love one another. He does not want us to fight or quarrel among ourselves. If you were a father, would you want your children to kill one another?”

Guru Mazlan Man described Silat Kalam in this manner: “Silat kalam is a martial art where you never use a lot of force or movement. And each movement is based on the position of the prayers, the position of where you pray to God.”

The first eleven buah are based on “Dua” which literally means “to give thanks.” It is the first prayer position, where the hands come up, with the palms facing the sky. This is the first movement of more than one-third of the buah. It is fitting that Dua plays so prominently in an art which asks you to remember who gave you your strength and your health. A man strikes you. You block by bringing your hands up in prayer position, knocking his elbow straight up. Each block is always followed by a strike. Since you have knocked his arm skyward, the rib cage and under arm are vulnerable. You can move in with a knee or elbow strike, or a simple punch. The palm of your hand is making contact with his elbow, so after you strike him, you can grab the elbow and pull in whatever direction you want him to go. The Guru would often grab the elbow, pull the man towards him and then deliver a karate chop to the man’s forearm.

When I was on the receiving end, I was amazed at how painful that chop was. Just like in Brazilian jujitsu, where you may strike a man simply to distract him and go for a submission, the same is true in Silat Kalam. When you karate chop a man’s arm, it hurts intensely, but only for a split second. So, that chop is not a fight-ending technique. But during that split second of intense pain, the man loses his will to struggle. You chop his arm, and immediately go for the throw or the lock. In one of the buah, you chop the arm, which knocks it toward the ground. You simultaneously grab the elbow or upper arm and continue to pull the man to the ground. Then you step on his hand. You release that arm and lock his other arm. Now, he is completely helpless, and in incredible pain.

For the full series, you simply lean forward with your knee against his elbow, breaking his arm.

In many forms of Silat that I have seen, once you have the man “where you want him” you go nuts with overkill and devastating force. Picture this buah: a man’s hand is under your foot. You have just broken his arm with your knee. You control his other arm. You place your knee on the back of his neck, and drive his face into the ground. His other arm is now in a very unnatural and vulnerable position, so you break it. Then you finish with any number of locks, grapples, kicks, punches….

And that is just one of the buah.

As violent and potentially lethal as the art is, it is still strictly defensive. All buah begin with a man attacking you, not the reverse.

“The movement of Kalam is art,” says the Guru. “You will never attack anyone. Practicing Kalam softens your kindness toward human beings. There is no more quarrel. And that is how God teaches us to be all of the time. So, Silat Kalam takes the position to teach people to know each other, love each other, and to learn self-defense.”

Guru believes that we should never hate another person for his actions because people are basically good.

“Our enemy is not people, our enemy is Satan. Satan always wants to attack us, kill us, and make us fight each other. So, we must live peacefully. And when we have self-defense, no one can attack us, nobody can harm us, and we will always be a friend to everybody.”