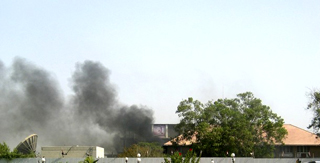 What? Gunmen suspected of being Al-Qaeda members attacked Yemeni police headquarters, killing at least a dozen people including three women and a seven-year old child. The gun battle lasted for an hour in which the raiders managed to free several detainees and help them escape.

Where? The military uniform clad gunmen attacked the security complex in southern Yemeni city of Aden.

When? The deadly raid took place during the morning flag salute on early Saturday morning, 19 June.

Why? The Islamist rebels are waging an insurgency against Ali Abdullah Saleh’s U.S.-backed government. Al-Qaeda in Arabian Peninsula accuses him of being an American puppet by surrendering the country’s sovereignty and killing Yemeni civilians. The anti-U.S. organisation wants to overthrow the establishment in Sanaa and impose a Shariah state in the country.

How? Yemen-based Al-Qaeda militants have mounted a bloody insurgency against the Yemeni government during the last couple of years. Hundreds of soldiers as well as thousands of civilians have died in militant attacks on military convoys and bases, oil installations and government buildings. Counter attacks launched by U.S.-aided Yemeni airforce have claimed the lives of hundreds of civilians along with Islamic militants have lost their lives in air raids and drone attacks .