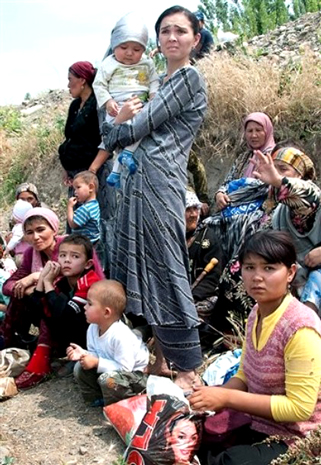 Who? Hundreds of Russian paratroopers arrive in the volatile Central Asian republic.

What? Kremlin mobilised its troops to protect military bases in Kyrgyzstan as ethnic riots rage for the third consecutive day. At least 100 people have lost their lives, mostly Uzbeks, whereas more than 1,000 people have sustained injuries in the bloody conflict.

Where? The worst ethnic rioting is taking place in Osh, the southern city in Kyrgyzstan’s Ferghana valley. The region is a stronghold of the former Kyrgyz President Kurmanbek Bakiyev.

When? The rioting began on Thursday night when two mobs clashed outside a casino. Russian troops moved to secure their bases on Sunday morning.

Why? Reports coming from the region suggest pro-Bakiyev supporters are targeting the ethnic Uzbek population due to their role in deposing the former president. Disputes over land and business pit the majority Kyrgyz and minority Uzbek communities against each other in the agricultural region of Ferghana in southern Kyrgyzstan.

How? Uzbeks in the city of Jalalabad and Osh have reported a systematic ethnic cleansing with heavily armed mobs looting and plundering their neighbourhoods in the city. Around 35,000 Uzbeks have fled to neighbouring Uzbekistan to save their lives. Kyrgyz Interim President Roza Otunbayeva has appealed to Russia to dispatch peacekeeping troops in the region. Russia is yet to respond to the emergency call.