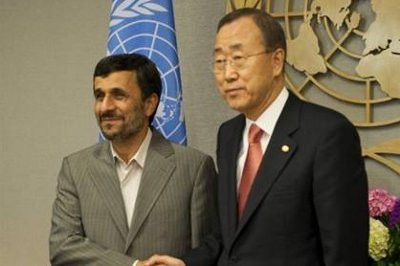 President Barack Obama said the resolution “will put in place the toughest sanctions ever faced by the Iranian government”.

He also said it “was not inevitable”, suggesting that it was Iran that had not been willing to engage diplomatically with the U.S., and not vice versa.

“We made clear from the beginning of my administration that the United States was prepared to pursue diplomatic solutions to address the concerns over Iranian nuclear programs,” he said, adding that the U.S. had made the offer to Iran of better relations “if – and only if – it lives up to its international obligations” – the usual euphemism for demands issued from Washington.

Obama added, “And I want to be clear: These sanctions do not close the door on diplomacy.” Iran could “take a different and better path”, a reference to the U.S. demand that Iran not enrich its own uranium.

For Iran, the whole point of a dialogue would be to negotiate on that point.

Obama told Newsweek last year that he had “been very clear” that a U.S. military attack on Iran would not be taken “off the table”, a position he repeated in April of this year.

In addition, he issued a further threat against Iran in April, saying that the U.S. “will not use or threaten to use nuclear weapons against non-nuclear weapons states that are party to the Nuclear Non-Proliferation Treaty and in compliance with their nuclear nonproliferation obligations.”

Since the U.S. charges that Iran has not lived up to its obligations under the NPT, this logically means the U.S. could use or threaten to use nuclear weapons against Iran – a statement which itself constitutes a direct threat of violence.

The U.N. Charter forbids member nations from not only from using, but also from threatening to use force in international relations, a fact of international law which Washington perpetually disregards.

As political analyst and historian Gareth Porter wrote, “The Barack Obama administration’s declaration in its Nuclear Posture Review (NPR) that it is reserving the right to use nuclear weapons against Iran represents a new element in a strategy of persuading Tehran that an Israeli attack on Iranian nuclear sites is a serious possibility if Iran does not bow to the demand that it cease uranium enrichment.”

With the new resolution, the Security Council decided “that Iran shall not acquire an interest in any commercial activity in another State involving uranium mining, production or use of nuclear materials and technology”.

The resolution thus could be interpreted as effectively seeking to impair Iran’s ability to maintain a defensive capability against the continual threat of either a U.S. or Israeli attack against its nuclear installations.

The U.S. has long sought to get China and Russia, two other permanent members of the Security Council, on board for further sanctions against Iran, but a lesser known fact is that Israel has also been working behind the scenes to this end.

The New York Times reported yesterday that “a high-level Israeli delegation” travelled to Beijing in February “to explain in sobering detail the economic impact to China from an Israeli strike on Iran”.

An Israeli official said their Chinese counterparts “really sat up in their chairs when we described what a pre-emptive attack would do to the region and on oil supplies they have come to depend on.”

The Israeli Foreign Ministry issued a statement in response to the passage of the resolution saying, “The Security Council’s decision is insufficient, and it must be accompanied by additional steps against Iran outside the Security Council,” a reference to their desire to see the U.S. and its European allies adopt more severe sanctions of their own.