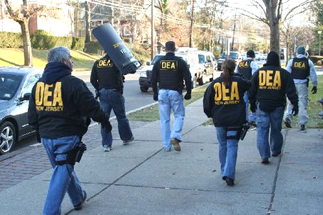 Who? Authorities in the U.S. arrest suspected drug dealers.

What? Officers of the Justice Department and Drug Enforcement Administration nabbed 429 people and seized nearly 1,360 kg of marijuana, 112 kg of cocaine, $5.8 million in U.S. currency and 141 weapons.

Where? The clamp down took place across 16 U.S. states.

When? The arrests were made on Thursday, 10 June.

Why? High demand for drugs especially cocaine and marijuana in the U.S. makes the narcotics business very lucrative for the cartels. Mexico is the main supply route of the drugs to the U.S. and has seen worst drug-related gang violence in which more than 5,000 people lost their lives last year.

How? Governments of the U.S. and Mexico have upped their operations against the drug cartels by arresting more than 2,000 people during the last two years. Washington has also given substantial aid and intelligence to the Mexican government to uproot the deadly drug gangs. Many anti-drugs and narcotics analysts have accused elements within the U.S. government of supporting Mexican drug cartels and benefitting from the multi-billion dollar illegal business.