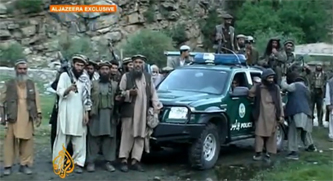 What? The Afghan militia rejected peace talks offer made by the Loya Jirga or Grand Assembly in Kabul.

Where? A group of influential Taliban fighters in Nuristan province, Afghanistan, snubbed the pro-government Jirga offer in an interview to Qatar-based Al Jazeera TV.

When? The rejection came on Sunday, days after the conclusion of peace summit in Kabul.

Why? “The Islamic Emirate has a rule. While foreign forces are here, no representatives are allowed to attend any jirgas, or any talks. After the foreign troops leave, Afghans can sit and talk together,” said Mullah Zayfan, a local Taliban commander speaking on behalf of the guerrilla movement.

How? The Islamist movement already claims to be winning the war against the U.S.-led NATO forces with most of the country under its control. Occupation forces, however, deny the claims. Taliban have waged a bloody insurgency in the country against foreign forces and their Afghan allies since their overthrow in November 2001. Suicide attacks, road-side detonations, car bombs, hit and run attacks, kidnappings and direct combat are Taliban’s answers to high-tech weaponry used by U.S. and NATO military in Afghanistan.