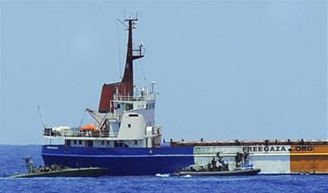 Who? The Zionist State of Israel acts illegally.

Where? The violation took place some 16 nautical miles (30km) off the Israeli coast.

When? Israeli navy took control of the aid vessel on Saturday morning, 5 June.

Why? Israel insists delivering aid to besieged people of Gaza threatens its national security as the territory is controlled by Hamas, a sworn enemy of the Zionist state. International aid groups and right organisations deny Tel Aviv’s claims and say they simply want to bring an end to more than three years of collective punishment of Gazans and improve their lives.

How? Israel has used disproportionate force against humanitarian activists by attacking aid vessels with commandos and targeting unarmed civilians with live ammunition resulting in deaths and life threatening injuries. Humanitarian organisations, on the other hand, have used peaceful means such as aid convoys and flotillas to deliver goods to the trapped people of Gaza.